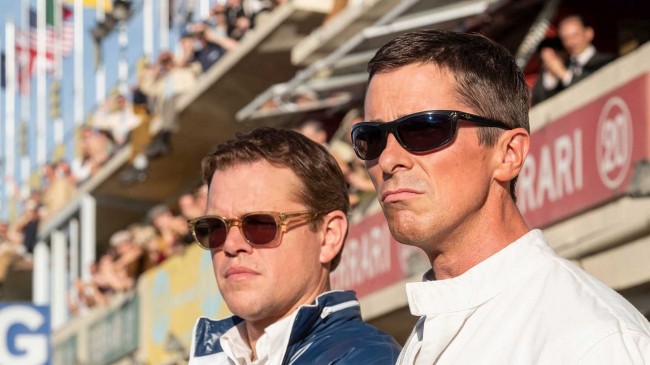 Ostensibly, the new film Ford v Ferrari is all about the true story of how the Ford Motor Company set out to best Enzo Ferrari’s prowess at Le Mans in 1966 through the help of two racing professionals, but at the end of the day, the film is really about pride. The pride of American manufacturing, the pride of being the best, the pride of men. The film contains some of the best action scenes on film this year, photographed and edited with precision and verve, yet what stands out, even more, are the male characters involved in the world of cars and racing and how they respond to all the literal twists and turns in the plot. It’s a character study, shot like an actioner.

Henry Ford II (Tracy Letts) is a world-class prick, a blustering and jaw-jutting CEO. As the story starts, he shuts down production at one of his plants to hector the working stiffs on the line, as well as the suits following him around like nattering flies. Ford wants a big idea that will take the company to the next level and everyone’s job is in jeopardy if they fail to offer up some fresh, new thinking.

Lee Iacocca (Jon Bernthal) believes the best way to do that is to broaden Ford’s family sedan image with something sexier – a sports car that will gain cred by racing at Le Mans, one of the most prestigious global sporting events. Italian carmaker Enzo Ferrari (Remo Girone) has dominated the track for years, and Iacocca wants to merge with the Italian company to build his vision. Pride, however, blows the deal at the last minute as Ferrari doesn’t like the hubris of his potential American partners. He sends Iacocca and his entourage back to Detroit with their collective tails tucked between their grey-flanneled legs. 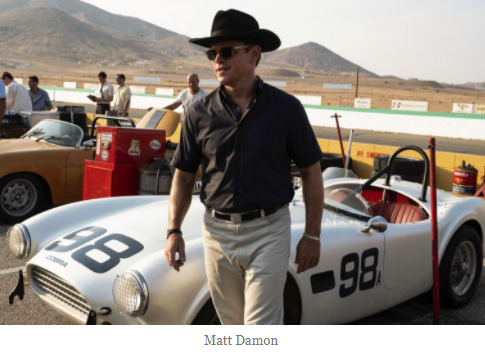 Iaccoca fears failing his boss, so he calls upon legendary racer Carroll Shelby (Matt Damon) to help him. Shelby’s now retired and running a car dealership during the day. He spends his weekends at the track racing his cars that are driven by his friend and colleague Ken Miles (Christian Bale). Miles is an incredibly intuitive driver, the equal of Shelby in his day, but he too has landed on hard times. His day job as an auto mechanic barely makes ends meet, plus his temperamental pride and snarky Cockney wit keep getting him into trouble with customers and the IRS.

Both Shelby and Miles are better than their current stations, so they sign on with Iacocca, agreeing to develop a new race car that will be ready to race in six months. The ticking clock of the story starts, literally and figuratively, giving these two men very little time to turn their lives and fortunes around.

The two men spar over how to make cars go faster, becoming a battle of wills. Shelby is quieter but just as stubborn, and while Miles may be working class, he’s first-class when it comes to knowing exactly how to make a car perform. They’re chums, but also rivals and the ‘versus’ part of the film’s title could just as easily been about these two. 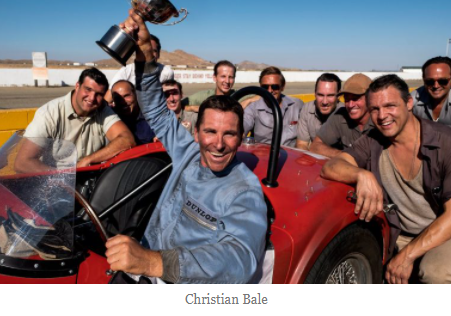 The greatest conflict in the film isn’t really Ford versus Ferrari or Shelby v. Miles, it’s art v. commerce. For the two drivers, racing is poetry in motion, as much an art form about risk and adrenaline as it is about speed. For Ford and his minions, including unctuous VP Leo Beebe played with grinning malevolence by Josh Lucas, their priorities are all about business image and market dominance. They don’t really care what’s under the hood as long as it helps make them look good and drive their stock higher.

What makes Ford v Ferrari so entertaining from the first second to last is how it delights in the world of cars and men, as macho as any film out this year, but also in how it continually tweaks these boys and their toys throughout the story. Director James Mangold and screenwriters Jez Butterworth, John-Henry Butterworth, and Jason Keller make all of the shop talk and racing scenes crackle, and you don’t have to be a gear-head to be thrilled by it all. Even more so, they make all the character interactions crackle as well, as exciting as any scene on the track.

Indeed, the battles between the men become almost comedic in their overt machismo. All the men huff and puff, trying to dominate each other, the noise of their bellowing and chest-beating rivaling the revs of the sound design that sears during the race sequences. Mangold and his screenwriters revel in these players, but they snicker at them too. 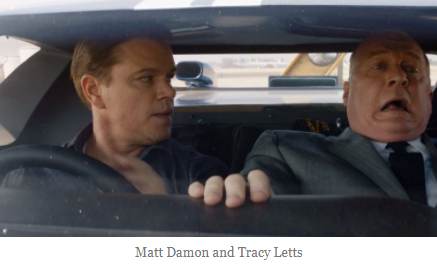 Letts can do windbags better than anyone onscreen these days, and he’s both formidable and funny. Watching Shelby and Miles take him down a few pegs in their interactions with him are some of 2019’s wittiest movie moments, particularly when Shelby takes him for a spin on the track to show him what it really feels like to go over 100 MPH. Lett’s fretting and eye-popping reactions during the ride are hysterical.

The film also continually swipes at both Iacocca and Beebe. Beebe is an easy target, presented in the hand-wringing company man mold like everyone from Frederick March in Executive Suite to Paul Reiser in Aliens. Lucas doesn’t appear onscreen much anymore, as he’s making a killing as the VO for Home Depot, but he should. He delivers the goods at being oh-so-bad. Iacocca is slurred more subtly, presented first as a champion of both art and commerce, but then he’s revealed to be grossly ineffectual throughout at managing either track. Bernthal can play anything, and how clever of Mangold to cast such a masculine mug in the role of such an increasingly weakened, corporate lackey. 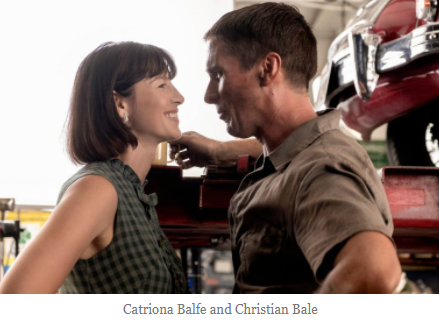 Damon does sly, subtle work here, never pushing too hard. He’s slow and steady, almost winning the race. However, the showier part is Bale’s and he makes his hothead funny as hell, especially when he’s talking to himself while racing. (A nice move by the screenwriters – it’s like he’s talking to us in that car with him.) Miles is also portrayed as a consummate family man, unafraid to show his love or vulnerabilities to both knowing wife Mollie (Caitriona Balfe) and earnest son Peter (Noah Jupe).

In many ways, these scenes are the most crucial to the film. It may be the B story, but it endears us the most to Miles. There are his pride and substantial pay on the line each time he climbs in the cab of a car, but the man’s also taking his life into his hands. The specter of death is always present around the edges of Ford v Ferrari, and in those warm, home-life scenes, we see exactly how much Miles has to lose. The majority of the film may deal with the extreme reaches of masculinity, but it’s in the tender scenes where Miles is shown to be the best a man can be. His driving gets our blood pumping, but his pride in his family is truly where his heart is. Ours too. 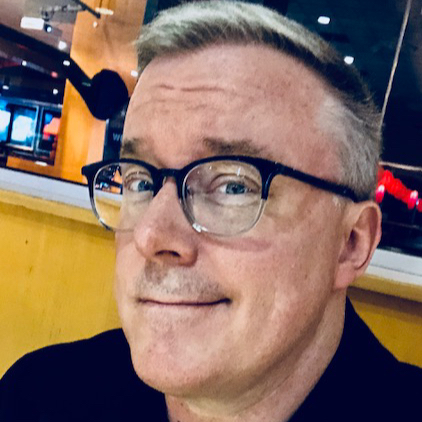 Jeff York
Jeff York was named one of the International Screenwriters Association's Top 25 Screenwriters to Watch in 2018. He has written 12 movie screenplays, two TV show treatments/pilots and two plays. His works have figured in the finals of 71 screenwriting contests and counting. He's been a Screencraft Fellowship finalist twice.  After 20 years in advertising, running a couple of creative departments, and winning almost every industry award, Jeff took his lifelong love of going to the movies and decided to take a crack at writing a screenplay. It was a character-driven horror movie...
MORE BY AUTHOR: Articles 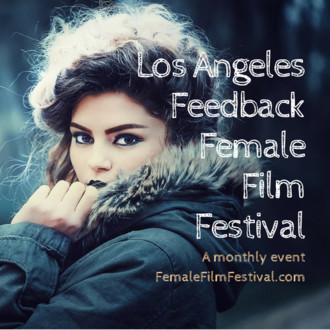