If one wished to select the most well-known story in the English language, a top contender would surely be Charles Dickens’ A Christmas Carol. Originally published in 1843, this little novella has reached the rarest heights of popularity, known to practically all for generations.

Yet the vast majority of people have never actually read Dickens’ prose. Rather, they know the story through its countless film and television adaptations.

Beginning with the first silent short in 1901, it has become nearly impossible to quantify how many times the tale has been reproduced on the big and small screen. In fact, one cannot turn on a television on Christmas Day or Eve without finding it again and again; in classic and non-traditional versions, in live action and animation, in earnest melodramas and spoofs or satires.

Given this, a student of screencraft must wonder what makes Carol such a viable property for continual adaptation.

What allows the original tale to be constantly reinvented while still remaining an effective narrative?

The best answer seems to lie in the process of adaptation itself. Literary works have always supplied material for film and television, yet the transition from page to screen is rarely a simple matter. Different forms of narrative operate by different rules; and thus, that which works well in literature often fails to match the aesthetic and structural requirements of film or television.

As a result, material must be added or omitted, changed or reorganized so the original work may meet such necessities. Yet amazingly, A Christmas Carol requires almost none of this retooling. Its narrative follows the cinematic 3-Act structure so closely it is as if Dickens intended his book for the screen. This has made A Christmas Carol possibly the most easily-adaptable work in English literature.

Presented in five sections, or “staves” as Dickens calls them, A Christmas Carol may be used as a prototype to understand the feature film’s five-point plot structure. 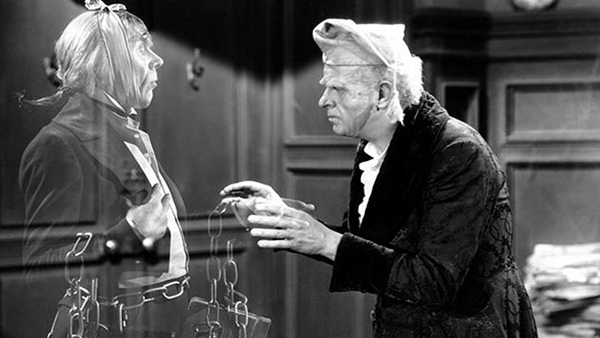 First, Dickens uses character conflict to establish everything the reader needs to know about his protagonist Ebeneezer Scrooge, the status quo of Scrooge’s world, and the supporting characters Scrooge will repeatedly encounter as the story unfolds.

Then, in a classic “Call to Adventure,” Dickens permanently disrupts Scrooge’s status quo through developments outside of his control. Marley’s ghost informs Scrooge that cosmic forces have become displeased with his wicked ways. And Scrooge is then given no choice but to accompany a series of spirits on a journey through time and space, else face eternal torment in the afterlife.

Like many cinematic protagonists, Scrooge does not wish to take this adventure. Yet the terms of this inciting event demand he must. As such, Marley’s intervention establishes the narrative’s Story Spine. Scrooge now has a physical problem he must resolve, a goal he must achieve to do so, a path of actions he must take, a source of conflict in the way (namely, Scrooge’s own unwillingness to cooperate), and stakes attached to Scrooge’s potential failure.

Carol’s “first act” comes to its close in Stave 2 with the arrival of the Ghost of Christmas Past. Like the End of Act 1 Turning Point found in cinematic narratives, this development forces Scrooge to pass a point of no return and irreversibly commit himself to the adventure.

The remainder of Stave 2 then parallels a cinematic Act 2A. A feature film orientates all Act 2A events around a single broad course of action. Likewise, Stave 2 finds unity by focusing solely upon Scrooge’s journeys through his past.

A cinematic Act 2A emphasizes the protagonist’s flaws by showing how they lead to self-defeating decisions or behaviors which worsen the situation. Stave 2 serves the same purpose, albeit in a more indirect manner. By visiting keys moments from Scrooge’s past, readers plainly observe the selfish and short-sighted decisions which have slowly led Scrooge into a life of bitter isolation. Yet like a cinematic protagonist, Scrooge refuses at this stage to recognize his flaws or admit they are a problem. The world is to blame for his failures, not himself.

No cinematic protagonist can succeed until the character takes personal responsibility for their flaws. Yet the protagonist remains willingly blind to these faults, and thus needs a surge of outside pressure to help break through this wall of ignorance. 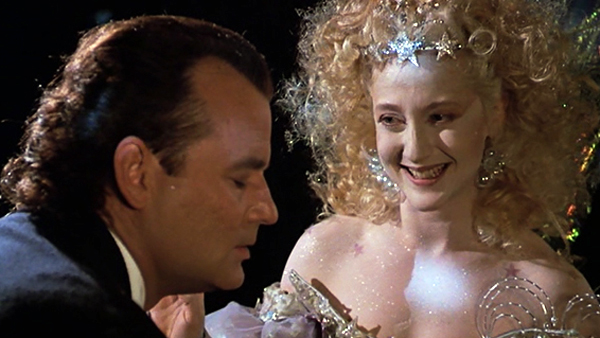 As such, most feature films end Act 2A with a third major turning point. The Midpoint event unexpectedly escalates the situation, demanding the protagonist turn down new and unexpected roads. As the conflict intensifies in Act 2B, the protagonist ultimately finds themselves trapped in a predicament where they must finally recognize their faults and admit the only path to resolution must come through personal change.

Like the escalated conflict of a cinematic Act 2B, this escort takes a much firmer hand with Scrooge, forcing his journey in an entirely new direction. By observing the lives of the poor, Scrooge’s estranged family, and his downtrodden employee Bob Cratchit, the Ghost of Christmas Present exposes Scrooge to the harsh realities Scrooge has so far ignored.

With this, Scrooge finally recognizes his attitudes towards his fellow man have been wrong, and opens himself to the possibility of change.

Yet while Scrooge professes to have learned his lesson, he like many Act 2B protagonists has committed to change in word only but not yet fully in deed. The roots of his flaws still run deep, and unless fully eradicated will return and drag him back into his old ways.

To complete the protagonist’s transformation, most cinematic stories end Act 2B with the most dramatic turn yet; a development which hurls the character into a most dire situation which may only be overcome through full surrender to the necessary personal change.

Once again, Dickens places this turning point at the beginning of the next stave. With the terrifying arrival of the Ghost of Christmas Yet to Come, Scrooge experiences what is indeed a most dire situation: a grim future filled with cruelty, misery, and death.

At the sight of his own grave, Scrooge faces a literal life-or-death situation, giving him no choice but complete surrender to the will of the spirits, as this is the only way to avoid his ultimate doom. 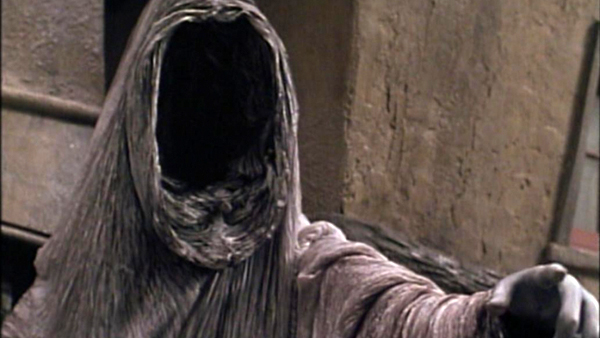 With this moment of conversion, Scrooge awakens in Stave 5 a changed man. What follows then mirrors a cinematic story’s climactic sequence and resolution. Empowered by his transformation, Scrooge sets about correcting his former wrongs, ultimately establishing a new and more beneficial status quo. With these final actions, Scrooge overcomes the story problem, saving his soul and escaping the threat imposed at the inciting event.

To conclude this section of analysis, we see that A Christmas Carol’s continual success in film and television lies primarily in Dickens’ close adherence to what has become the cinematic five-point plot structure.

Yet Carol’s true strength as a cinematic prototype lies even deeper than this. By dramatizing a process through which a protagonist transitions from sinfulness to salvation, Dickens’ work also illustrates the interdependent relationship between narrative conflict and the Character Arc.

As stated in my book Screenwriting and The Unified Theory of Narrative, Part I: The Unified Narrative Structure, traditional cinematic narratives use plot events to incite character change through a process akin to modern psychotherapy.

Current approaches to psychotherapy are predominantly based on the idea that a person’s current attitudes and behaviors originate from his or her perceptions of past experiences. If these perceptions are inaccurate or unhealthy, they may create a warped views which cause the individual to think or act in counter-productive ways. As a result, the person struggles in life and may commit mistakes which will harm his or her future.

Thus, a therapist must root out patients’ faulty perceptions, lead them to challenge the resulting beliefs, and ultimately replace those beliefs with a healthier mindset. If successful, individuals may correct problematic attitudes or behaviors and forge happier futures.

Only this “therapist” uses far harsher methods. Essentially demanding the protagonist change or die, the plot hurls the character into a trial by fire which may only be escaped by adopting the correct psychological change. 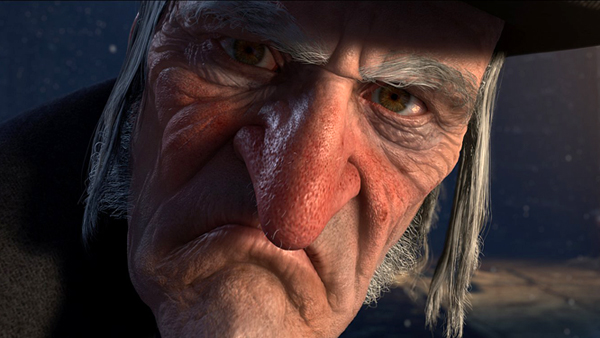 With each setback or failure, dramatic pressures force the protagonist to realize that their current methods of thought or behavior are self-defeating or counter-productive. To succeed, they must challenge their former mindset and do away with harmful attitudes or beliefs. Once this barrier is broken, the plot exerts even greater pressure, revealing a narrow path to victory which may only be followed through a full and absolute commitment to the proper personal change.

With Ebeneezer Scrooge’s journey through the past, present, and future, A Christmas Carol illustrates the cinematic narrative’s psychotherapeutic process far more literally than practically any other example.

The first spirit reveals to Scrooge his faulty perceptions of the past. The second spirit shows how resulting attitudes harm Scrooge’s present. The third spirit warns Scrooge of what will occur if he remains on his current path.

With this logical progression of evidence, Scrooge must admit that his “therapists” are correct, and make the proper changes in thought and behavior for his own well-being.

Scrooge’s transformation could have just as easily occurred in the office of a shrink. Yet like any good narrative, A Christmas Carol uses dramatic conflict to accelerate Scrooge’s change, placing him in a physical predicament where self-evaluation becomes a necessity for his own survival.

To conclude, Charles Dickens’ A Christmas Carol may serve as a far better cinematic prototype than other models such as the “Hero’s Journey” or the point-by-point breakdowns of the 3-Act Structure, due to its far greater focus on the relationship between plot progression and character change.

In doing so, A Christmas Carol does what these other models cannot: it demonstrates how cinematic narratives communicate theme.

To put things most simply, theme = character transformation + plot resolution. If a protagonist transforms in a certain manner and is rewarded at the climax, the theme endorses the psychological change. If the protagonist changes and is punished with failure, the theme denounces that change.

By adding this final element, we find a full explanation for A Christmas Carol’s continual success as a holiday narrative. By comparing greed and self-centeredness to open-hearted generosity, and using a series of events to argue the far greater benefit of the latter, Carol’s use of conflict and character delivers a powerful message on the spirit of charity and goodwill the Christmas season has come to represent.