This entry is part 1 of 2 in the series Cliches:

Stop me if you’ve heard this one before: Detective chases a suspect to a dark alley. Suspect has to be hiding in that alley so detective steps softly in, gun out, senses at maximum, step by agonizing step then – stumbles back and nearly shoots as something jumps at him. Cat, not the suspect. Start the suspense clock again.

How about the police team that blows an assignment and lets a suspect get away. Captain calls them in, gives them all the grief he can along with some choice saliva spray exploding from his righteous anger.

The Jumping Cat (possum, raccoon, rat) and the Spitting Captain are well-worn clichés and stereotypes from tens of thousands of hours of cop movies and TV shows. I almost added the words “badly written” but they ’re not. Not really. They ’re just overused.
Truth is we as fans want these tropes in our entertainment. The trick is to not have a trope become a cliché, or to make an archetype into a stereotype.

So Then, What Is A Trope? 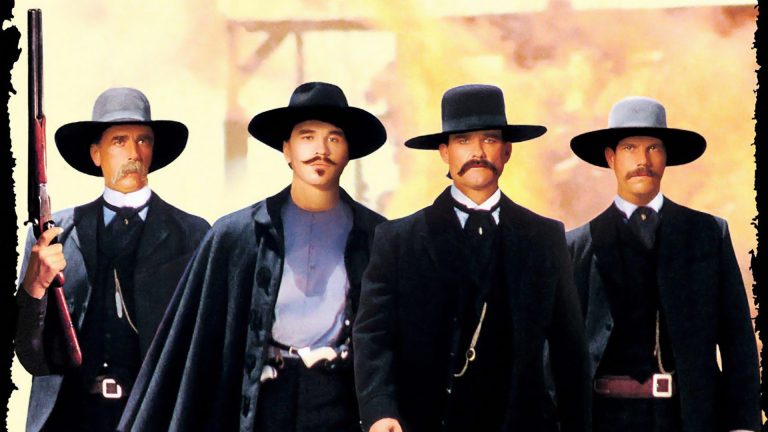 The literary definition of a trope is as a figurative or metaphorical use of a word, expression, or situation. There are dozens of literary tropes like metaphor, allegory, synecdoche, irony – these are not what we’ll be discussing.

The more widely-used definition is something familiar that we see, hear, or experience in films a lot – like the “I really love you” moment in a romantic comedy, or the gunfight showdown in a western like the one between Doc Holiday and Johnny Ringo in Tombstone.

• The “first kiss” in a romantic comedy. Also, the “meet cute” moment.
• The all-is-lost moment like in Kramer vs. Kramer where Dustin Hoffman has to face the harsh reality of losing his son to his ex-wife.
• The unexpected death of the villain just as they think they’ve won. The melting Nazis in Raiders of the Lost Ark or the exploding villain in The Fury are prime examples.
• The requisite checking of a gun’s ammo moment in hundreds of films and TV shows.
• The theatrical ending of a tea cozy mystery where the killer will be announced to a room of suspects: “I’ve gathered you all here to reveal who killed…”
• The running kid, man, woman who you just know is gonna die especially if they ’re opening the film.
• The track suits and T’s worn by gangsters. Or the jeans, collared shirt, and cowboy hat worn by every modern-day sheriff. 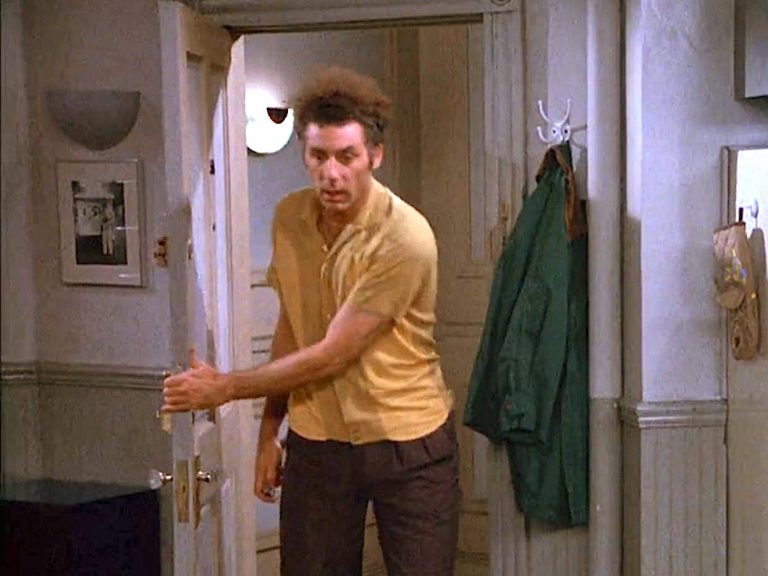 People go to movies and TV series hungry for these character, situational or motif tropes. How far would an audience support a Fast and Furious film if there was no drifting or outrageous car stunts? No pew-pew in space movies even though there’s no air to carry the sound in outer space? Unthinkable.

TV series develop their own sets of internal tropes. Seinfeld had Kramer’s sliding entrance. NCIS has ‘Gibbsisms’ like Rule #-whatever, or ‘Gear Up.’ Blue Bloods has the family dinner. The Brokenwood Mysteries has the Neill Rea character talking to the dead victims. Sherlock Holmes (all series) almost always had a scene with the minute diagnosis of a person by Holmes based on his or her appearance.

The wonderful James Bond franchise has its own set of tropes: smart, beautiful women, amazing vehicles, incredibly dastardly villains, exotic locations; the bespoke suits he wears, the tech, the way he introduces himself. All these, in varying degrees, are in a Bond film and we’ve come to anticipate them.

A trope is wanted, expected. The issue becomes when we don’t elevate these familiar persons, places, concepts, motifs, or things and they becomes clichés.

A phrase or opinion that is overused and betrays a lack of original thought. There are many ways cliches and their way into our scriptwriting.

Writing cliches in narrative: “She stepped into the lion’s den.” “They were rolling stones who gathered no moss.” “Love is blind.” “The heart wants what the heart wants.” “She had a heart of gold.”

In dialogue, you can get a pass. People do speak in clichés all the time. We tell our friends: “There’s plenty of fish in the sea.” “LOL.” “It is what it is.” Our characters can speak that way if that’s not all you’re doing with them. It might be fun to have one character who speaks in only cliches but to do it consistently with all characters really just points out weaknesses in your writing.

• The urban gunfight in which only the good character’s bullets hit, and no bad character can seem to shoot anything except windows and vases.
• A car chase scene where there’s little or no traffic, no news organization covers the event, and cops seem to be completely missing.
• The falling-into-a-room, tearing-off-each-other’s-clothes sex moment.
• The closing medicine chest mirror where the killer suddenly appears behind a character.
• The jumping cat/possum/rat mention at the beginning of this article.
• The – I’m gonna shoot you with this gun, but you somehow cleverly removed the bullets in the gun.

There are hundreds of lists of these. Explore at your leisure. (another cliché)

Opening a film or episode with a character waking up and doing their morning routine sequence can be a cliché. The film, Harper, did this, but elevated it by having Paul Newman do something unique about his morning coffee. It not only changed the sequence in a good way but it showed you something interesting about the Lew Harper character.

This is a tough assignment for any writer. There’s a line between a character who is an archetype or a stereotype.
An archetype is a character who is familiar to us, like a mentor, housewife, sidekick, etc. but who is uniquely altered to fit the situation. Star Wars has many archetypal characters. Obi-Wan Kenobi is a mentor; Han Solo, a sidekick. Princess Leia is a Snow Maiden archetype in Joseph Campbell mythological terms. 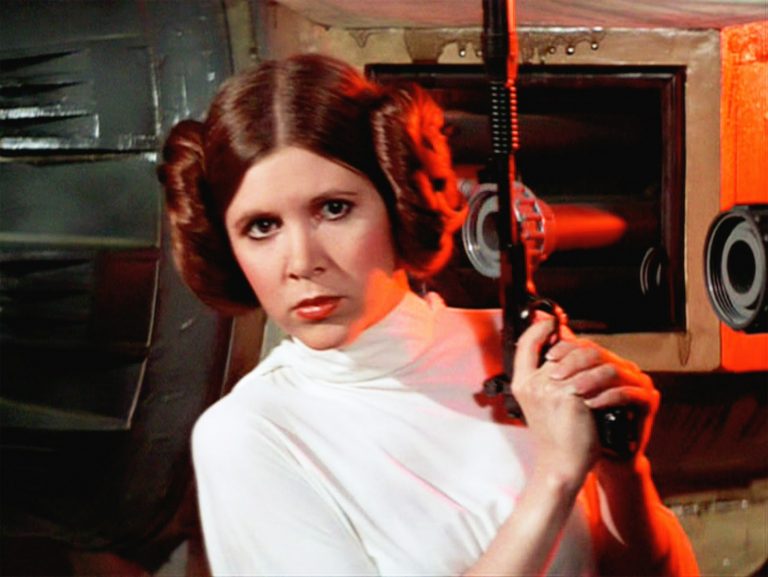 Orphan Black takes the archetype concept to new levels. Tatiana Maslany plays multiple characters brilliantly. Four or five remain consistent: Sarah, the punk Brit, Beth, the cop who Sarah fakes, Allison, the soccer mom, Cosima, the scientist, and Helena, the insane Ukranian. Throw in a half dozen more characters, all played by Ms Maslany, and you’ve got quite an acting and writing assignment to get something fresh from these characters – which the show does consistently.

In less skilled hands they could have all become stereotypes. I won’t cover all the ways the writers enhance the characters but for instance, Sarah, the punk goddess, has a little girl who she loves fiercely. Allison for all intents and purposes appears to be a stereotypical soccer mom except she has so many strange and unusual trajectories you can never really pin her down. My favorite is Helena who is as odd, feral, fierce, and as funny as any character I’ve ever seen and eats anything as if it’s her last meal – which given who she is just might be.

All of these characters have something that elevates them into archetypal status. Of course what really changes all perspective here is the concept: they’re all clones. Nothing is quite as you’d expect it because of that.

To make our characters different is to give them a ‘flaw.’ This works, but grabbing something simple, like making them dependent on drugs or alcohol, is one of the consistent clichés that tends to reduce, not elevate your characters. In many cases, the writer creates simplistic issues that then create simplistic solutions and we end up with a cliché.

House, M.D. has an opioid addiction as a result of a leg injury. The addiction, though, is a symptom of an abusive childhood and his inability to trust. This is a deeper dive into the reason for the addiction. He’s brilliant, but disdains everyone, seeking solace in the surety of solving medical puzzles.

Tony Soprano suffers from terrible anxiety that causes him to pass out. This itself makes him unique. A mob boss who goes to a psychologist is unheard of. One might think his life as a crime boss is the reason for this anxiety but then it’s revealed that his mother and uncle are as bad as any wiseguy in the mob. In the first season they try to have him killed. With a family like that it’s no wonder he grew up twisted.

Bosch is an L.A.P.D. detective who lives in a multi-million dollar home because of “movie money” he earned when Hollywood used two of his cases for films and hired him on as consultant. This seeming disconnect between a ‘normal’ detective and Bosch who lives above the city in a house in the clouds, makes for some interesting situations (and has some interesting symbolism.) When people see where he lives, many assume he’s ‘on the take.’ He’s also a man who does things his own way, damn the consequences, which gets him into a ton of trouble. You can tie this, metaphorically, to him living above everyone else – he’s better than everyone else and doesn’t play by the rules.

Doc Martin features a genius surgeon who has hemophobia, a fear of blood. It makes him nauseous and unable to function in his chosen discipline. It was caused by an event when he was a surgeon in London and although he’s sometimes able to mitigate his response to blood, the hemophobia is present in all seasons of the show in one form or the other and colors everything he does.
Clint Eastwood has played many cop characters but in Tightrope he portrays one who gets lost in the seedy world of his investigation’s victim. His Wes Block character becomes part of the dark sex industry he’s investigating. It makes for an interesting and shaded character who isn’t typical.

Turning a stereotype into an archetype is a matter of going deeper into your characters than just grabbing an off-the-shelf issue and attaching it to your character’s bio.