The Jurassic Park franchise has enjoyed mammoth success over its six big screen offerings. Rather than being a series of sequels – JP has cleaved its story into two trilogies – Jurassic Park and Jurassic World. The major shifts were visiting cloned dinosaurs at a theme park to having them roam free across the world and living alongside humans.

Dominion is the latest instalment of the JW series written by screenwriters Colin Trevorrow and Emily Carmichael. Trevorrow has an established history with the franchise. He wrote on  Jurassic World (2015) and Jurassic World: Fallen Kingdom (2018) along with several Jurassic television shows. In 2019, Emily Carmichael cowrote the short film Battle Of Big Rock with Colin Trevorrow to pick up where Fallen Kingdom had ended and Dominion was yet to begin giving rise to a fruitful partnership. 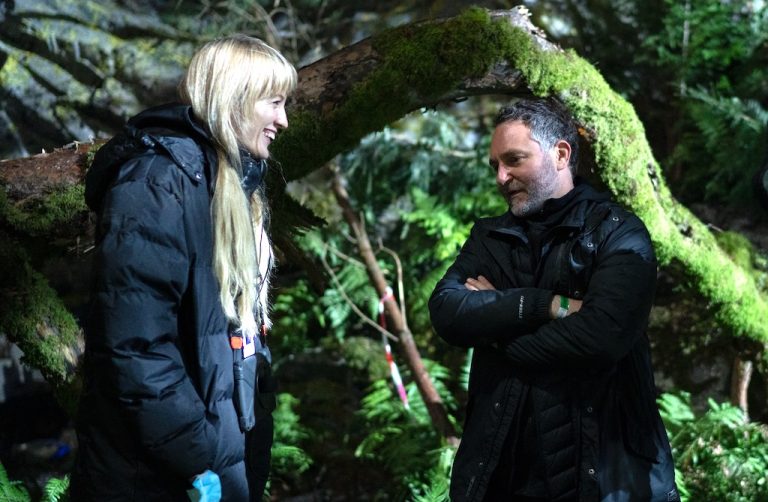 Colin and Emily spoke with Creative Screenwriting Magazine about their latest foray into the Jurassic franchise and why it deserves to keep going. “It’s over the course of last two films that I gained a further understanding of what the audience needs in terms of continuing stories that they loved from their childhoods,” opened Trevorrow. “Especially these powerful emotions and connections that we’re dealing with.” He constantly monitored the altitude of the stories in terms of what they wanted the audience to feel.

Trevorrow affirmed that each new Jurassic World film made bold narrative choices to propel the franchise. “We’re not just going to be making carbon copies of the original Jurassic Park. It’s our responsibility to let it evolve.”

By its very nature, Jurassic Park has vast story possibilities once the dinosaurs left the ill-fated theme park. “We have this sprawling adventure in a world filled with dinosaurs. We want to go to different places, getting on planes and arriving in new cities,” declared Carmichael. “But we also wanted to drill down into those Jurassic Park basics of characters trapped in a hot box situation with these deadly animals.”

Jurassic World: Dominion examines the theme of coexistence between man and dinosaur, especially when it’s challenging. “The movie begins with humans and dinosaurs being at cross purposes because there are two opposing ecosystems colliding. So, collaboration and cohabitation is not easy,” added Carmichael.

How do we cohabit with a species that doesn’t co-operate with us?

“There is always this layer of existential threat in the characters,” added Trevorrow since a compromise is unlikely to be reached. Colin confessed that this dread became more evident in his mind during the course of his work of the franchise. “Another layer to this sentiment is the need to join the fight, not looking the other way, and doing your part to make the world a better place,” he continued. There is also the cautionary tale component to the film. “If humans don’t work together, they’ll end up becoming extinct like the dinosaurs.” 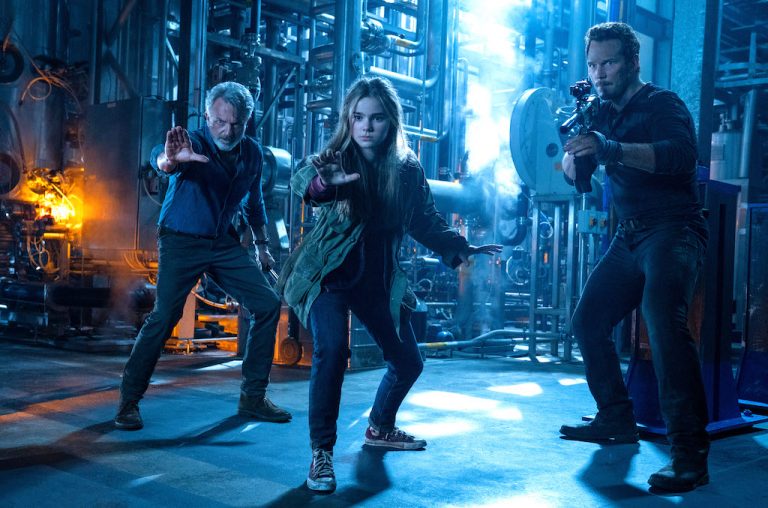 There is a natural order of species along the food chain. “I see dinosaurs as any other predator. They are majestic, beautiful creatures that can take you out,” said Trevorrow. However, neither Colin nor Emily believe that dinosaurs are at the top of the food chain. “History shows that wherever humans go, fauna is eliminated,” remarked Carmichael. “However, dinosaurs paired with an ecological disaster or another animal in the tree of life, could create the perfect storm that could bring down humanity.”

The world we are presenting in Dominion is possibly a few moves away from checkmate for humans
The greater philosophical ecological questions in Jurassic World: Dominion are anchored in the emotional core of the film. “It lives in its characters. Obviously we have questions about Dr. Ellie Sattler (Laura Dern) and Dr. Alan Grant (Sam Neil) and their relationship. We have our legacy cast. We want to feel that familiarity and truthfulness to the characters we saw last, but we also want to know we’ve they’ve been and where they’re going to go. We also introduce new characters and want to see them shine too,” said Carmichael. “It’s all about meeting and re-meeting.”

Everything Will Be Alright

Through the six-part Jurassic saga, “you really want to know that the characters are safe and will be okay at the end of each film because we care about them so deeply,” mused Trevorrow. “And I don’t mean just the humans. The dinosaurs as well.”

“In one storyline, two parents Owen Grady (Chris Pratt) and Bryce Dallas Howard (Claire Dearing) are trying to get their child Maisie Lockwood (Isabella Sermon) back with whom they have a tenuous relationship.” Maisie is more than a teenager entering her rebellious adolescent years. She’s also struggling with her origins and her identity unaware of the danger that awaits.

On the other side, “We also have an activist story of people who deeply care about the state of the planet and recognize we could be in danger,” said Trevorrow. Every character is seeking redemption for past deeds is an underlying theme in the Jurassic franchise. “This theme creates a satisfying movie,” he continued.

“Colin and I don’t have a conversation about whether characters should be talking instead of doing a cool thing. Instead, we discuss how the cool thing they’re doing can be shaped to express their emotional growth,” she continued. 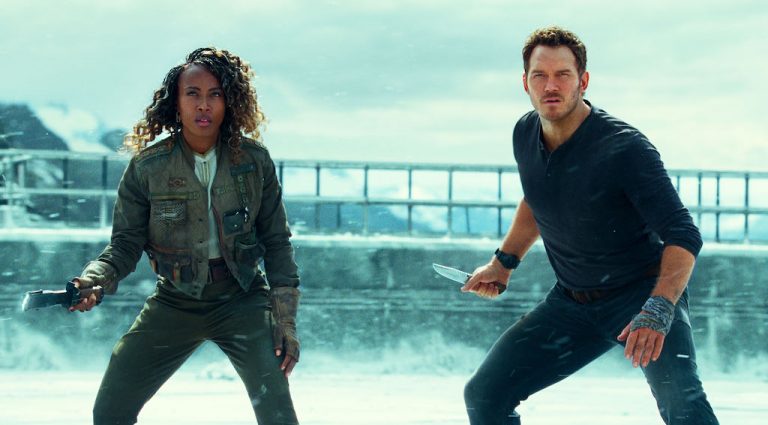 A Matter Of Time

A prologue to Dominion showed a battle between two dinosaurs sixty-five million years ago with humans in the middle trying to escape them. “The contest of the time that has elapsed illustrates the magnitude of it,” said Trevorrow. Nomadic human tribes first inhabited the earth around three-hundred thousand years ago. Alan Grant concluded, “This isn’t about us.” It feeds into humanity’s invasion and manipulation of nature and recognizing its grandeur and timeline. Humanity has caused the most destruction of the planet despite it being here the least time.

Emily Carmichael had a different opinion on the more pivotal moments in Dominion. “I think the theme of coexistence is illustrated in the culmination of the Owen and Blue relationship (a velociraptor that he trained). Any time they look at each other, Owen shows a love and respect that he has for that dinosaur in his face.” He simultaneously wants to reassure her that he will rescue her baby, but also pleading for her not to eat him. “This captures the essence of the franchise which is also a strong possibility.”

Colin Trevorrow and Emily Carmichael enjoyed a balanced writing partnership where they each elevated each other. “We had story conferences spread out over weeks and months. Then we had more dedicated work sessions to write an outline.” Each would write a first pass of the scenes in the outline and send them to each other for feedback with the exception of the final attack sequence at the end of the movie which Colin savored all for himself.

Biosyn is the corporate competitor to Ingen which featured more heavily in Dominion. Apart from getting the scientific background correct in the story, the writers also felt that their justifications for the corporate actions had to be sound. “We discovered new science as we wrote the screenplay. We discovered Crispr and gene drives, but had to give Biosyn a solid reason to kidnap Maisie and the baby dinosaur.” said Carmichael. It was a concern that the writing duo wrestled with for some time. Did there need to be one reason to kidnap each or was one reason sufficient? They decided upon the former to allow the two stories to work as a functional dramatic unit.