Musical comedy-drama Zoey’s Extraordinary Playlist has been a welcome hit for NBC with its whimsical depiction of Zoey Clarke’s (Jane Levy) power of hearing and interpreting the innermost thoughts of characters as they expressed themselves through song. Showrunner, Austin Winsberg (9JKL, Gossip Girl) spoke Creative Screenwriting Magazine about adapting his story of losing his father to Progressive Supranuclear Palsy in 2011 while he himself became a father, to our television screens.

Creating a TV series based on personal events can be fraught with its own challenges with regards to how best transform the tragic source material into an entertaining and emotionally-compelling TV series.

Winsberg made a conscious decision from the start to create a TV show in his father’s honor that wasn’t a dark drama. “I try to write everything from a personal place. I approach everything with a degree of levity,” said the showrunner. After all, life can be a drama with degrees of comedy thrown into the mix. Expressing a dramatic sentiment through traditionally non-dramatic means can make a show more dramatic. 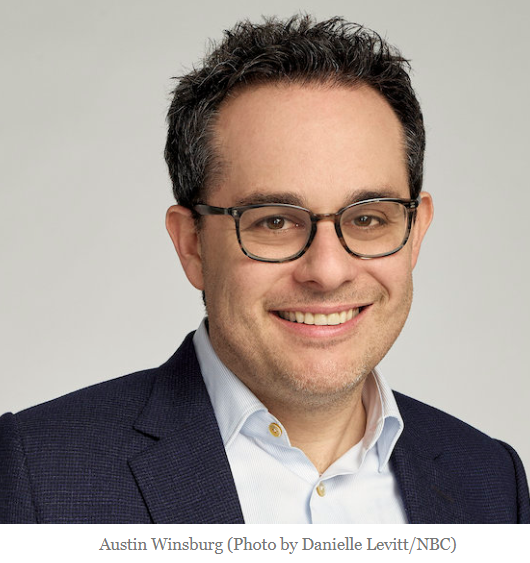 “The drama lands harder when it’s interspersed with comedy or a joke to deflect it a bit."

The actual events of Sir Winsberg Senior could have easily lent themselves to a TV series that was dark, sad, and tragic. Then Sir Winsberg Junior decided, “What if the best way to tell the story in the state my father was in during the last six months of his life was through big musical numbers?” At that point, the idea of Zoey’s character (and her extraordinary playlist) was shaped. “The concept of music gave me some joy and gave something that could have been depressing some life and theatricality.” Winsberg honored his father’s legacy through music, laughter, and love.

The TV writer didn’t always want to tell the story through Zoey’s perspective. After all, it was Mitch Clarke’s (her father played by Peter Gallagher) story. When Winsberg pitched the idea for Zoey’s Extraordinary Playlist from the son’s point of view to the Head Of Drama at NBC, she deemed it “too serious and small.” She encouraged Austin Winsberg to expand that world into something bigger.

He remolded the concept from the son’s point of view. Initially, Mitch had the ability to see the world through musical numbers since he was immobile and mute. The showrunner asked some questions about the TV show’s point of view. What if the son could see the world through song and that was the way he communicated with his father? “This could open up the show more by exploring the son’s dating life, career, and family life, rather than just being about a person who’s dying.”

It was Paul Feig (one of the show’s executive producers) who suggested making the lead female. After some rapid writing nip and tuck, it became Zoey’s show. Winsberg initially resisted the idea, because it didn’t reflect his personal experience. Finally, Austin Winsberg warmed to Feig’s feedback and agreed that, “Zoey’s perspective would add layers of complexity.”

The TV writer was always cognizant that being too close to the source material might blind him to the potential of the show. He needed to step back. “I think you need to understand what makes a good story and not limit yourself by just writing about an experience you went through.” Being open to other people’s experiences in the TV writers’ room also added a new dimension and emotionality to the show to enrich the story.

The big picture events in the TV series happened in the Winsberg household at the time. The TV writers’ room and the cast embellished them and either filled in the missing pieces or replaced them with more interesting ones. Austin confessed that his father’s love of music and dance may have been overstated in Zoey’s Extraordinary Playlist. “I took the gregarious, dynamic spirit of my dad and imbued it with Mitch’s suaveness,” he continued.

It was imperative that the songs were an integral framework of the show rather than a gimmicky collection of popular tunes. “So much of Mitch and Zoey’s personalities came out in the song choices,” said Winsberg. Song selection was a meticulous process.

“The songs didn’t need to match up perfectly in terms of dialogue. As long as the emotions of the songs conveyed the idea.” This wasn’t a drawback because sometimes songs can express feelings and intent that words can’t.

Pitching a TV series as a dramedy with musical interludes may seem like a contrivance that could easily wear out its welcome. A successful TV series can’t sustain itself indefinitely without being grounded. 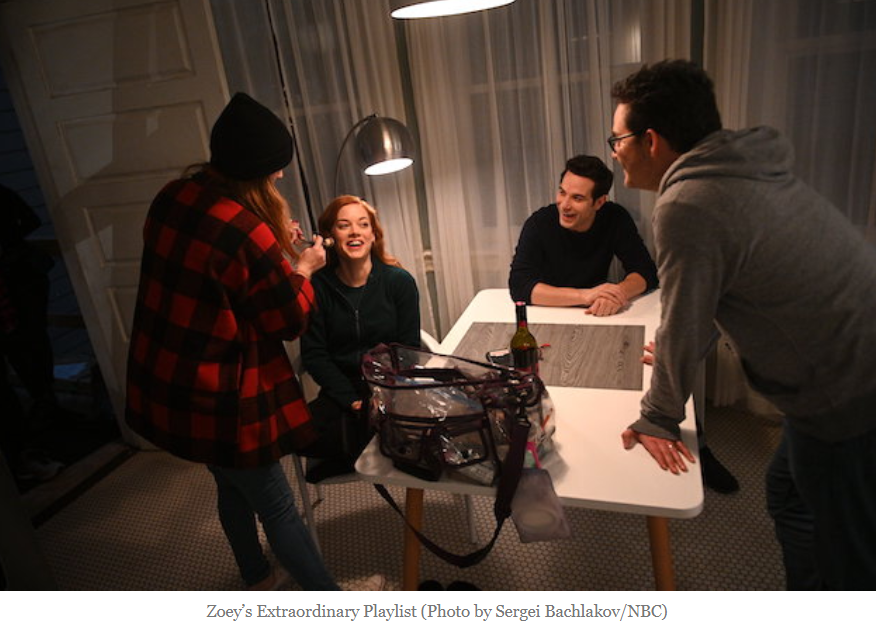 Winsberg used the conceit of Zoey’s Extraordinary Playlist to his full advantage. “Everybody in the show is struggling in their own way. We can be deceived by what’s happening on the surface because the reality is far more complex when we strip away the layers through songs.” The songs are a vital tool to help audiences better understand the characters, relationships, and dynamics of the show.

Austin Winsberg declared that the show would still stand if the musical elements were removed. This separates the gimmick from the essential. “Hopefully, the roots and groundedness of the show were strong enough without the music and it is another layer to the complexity of the TV show which gives it fantastical elements and heightened emotions.”

Winsberg spent large amounts of time on the ‘bookend’ episodes of the show. The pilot had to set up the rules of the world and the extent of Zoey’s powers, the characters, and their relationships. “I had the benefit of time and many eyeballs on it. Once the show gets going, it’s a freight train and you don’t have as much time for each episode.” Winsberg also advises being judicious with how much exposition is gradually folded into the story. Exposition is the story, not prerequisite reading.

In the middle episode of the series – episode 6 (Zoey’s Extraordinary Night Out), big things happen that turn the story in a big way. “As you’re building a series arc you need to find ways to change audience expectations. In this episode at Simon and Jessica’s engagement party,  they discover Zoey and Simon’s clandestine emotional relationship. This turned a lot of the character dynamics on their head.”

“The finale was about bringing the series home in an emotional and satisfying way with Mitch’s death.”  The Tv writers’ room did discuss whether they should end on a cliffhanger or tie up loose ends in a bow. “The end of the season was still leaving doors open for the season to come.” It’s the end of a chapter not the book.

Austin Winsberg was clear not to give Zoey a dichotomous choice between choosing Max or Simon at the season finale. “It’s way too premature to pair either of them up after only twelve episodes.” Both Simon and Max needed to get out of the friend zone and be viable suitors while simultaneously giving the TV series an emotional conclusion.

Despite its entertaining, upbeat style, Zoey’s Extraordinary Playlist performs an admirable juggling act between dark and light tone and drama and comedy genres. Even with this breadth, the TV series still needed to stay inside its lane.

There were some comedy scenes that were discarded because they were too broad or too silly for the show. Other scenes were simply too superficial and didn’t go deep enough into the characters. The show relies on the grounded nature of each character and using songs to reveal their hidden thoughts and feelings. This is analogous to breaking the fourth wall or the Greek chorus.

“A lot of the tone is determining our comedic and emotional sweet spots. We didn’t want the emotions to feel manipulative,” said the writer.

On the other side of the spectrum, other discarded pitches included scenes that were too sentimental or earnest. “A lot of these decisions were based on gut instinct.”

Austin Winsberg admits he still grapples with having too many cooks in the writers’ kitchen in terms of feedback notes. “So many times, not everybody’s on the same creative page. Writers and network executives have different concerns. You need to be a team player and take a note while maintaining the integrity of the show.”