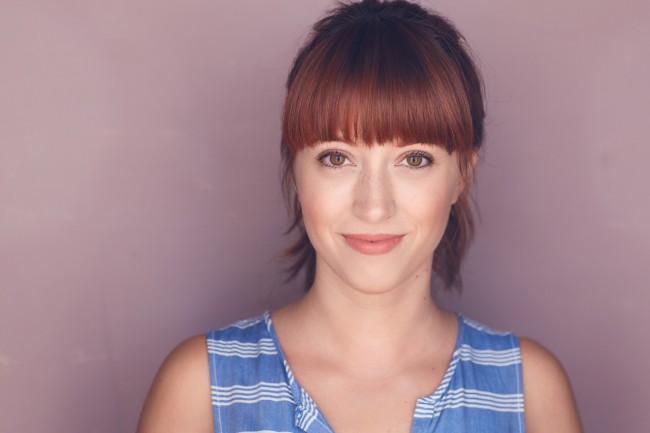 Erica Tachoir is a writer, director, and actor based in Brooklyn. Her screenplay Scattering Jake was received wide screenplay contest recognition. Her short film Too Sunny FOr Santa (starring Natalia Dyer from Stranger Things) screened at festivals across the country. With her comedy partner Corinne Caputo, she co-wrote and starred in the web series Life, After. They were named notable writers at the New York Television Festival for their (finished) pilot script, Unfinished. Erica has run five half-marathons, which is pretty much the same thing as running two and a half full marathons, and she has appeared in national commercials playing such roles as a hipster urban farmer, a friendly insurance rep, and the “best wife ever.” As an ISA Top 25 screenwriter to watch, we spoke to her about her writing process.

DESCRIBE YOUR UNIQUE PERSONAL AND PROFESSIONAL BACKGROUND AND THE SPECIFIC PROJECT THAT ATTRACTED ISA INTEREST?

I was raised in Nashville, Tennessee by my two jazz musician parents. (Nashville may be Music City, but typically, that doesn’t mean jazz.) I went to film school at NYU/Tisch and have lived in New York ever since. I’ve typically opted for part-time survival jobs that allow me to pay rent and leave me with lots of time and energy for my creative pursuits. I split my time between my solo work and projects I create with my comedy writing partner, Corinne Caputo.

The project that attracted ISA’s attention was my dramedy feature Scattering Jake, which won the grand prize in ISA’s Table Read My Screenplay Austin competition. I had a great time attending the Austin Film Festival through the competition, and it was fantastic to hear the screenplay read aloud.

WHY DID YOU DECIDE TO BECOME A SCREENWRITER ABOVE ALL OTHER CAREERS?

If there were another career I found fulfilling, I’d do it. But I’ve built my life around writing. As I mentioned, I took a lot of part-time jobs just because they left me time to write. I’m annoyed if I’m stuck doing something else and don’t own my creative time, even if the money is good. If I think about what a really great day is, it’s one where I’m making progress on one or more of my projects. I feel incomplete without that. So, it’s not really a choice so much as a lifestyle that I am called to maintain.

A few years back, when I was in a real slump and worrying about if I’d ever “make it,” I asked myself whether I would keep writing every day if I knew that nothing would come of my work. If I were just writing for myself, would I still do it? It was a tough question to wrestle with, but I came back with a pretty confident yes. Realizing that writing is part of who I am and how I exist in the world was actually quite liberating. It’s good to release myself of seeking validation (although validation is obviously great) and to focus instead on the actual work.

Discipline. You have to build a healthy routine of habits to maintain progress and a good creative life. No one is going to dictate that for you. You have to carve out the time and space to do the work and stick with it even when it’s hard. Be your own boss. And more importantly, be your own hero. Don’t wait for someone to come in and discover how brilliant you are. Create your own opportunities and treat your creative work like it’s your actual job.

WHAT IS YOUR WINNING SCRIPT AND WHY DID YOU CHOOSE TO WRITE IT?

Scattering Jake is about Kolby dumps her dead husband’s ashes down the sink when she learns that he knocked up her best friend. Now, she must wrestle with the truth as she embarks on a road trip to scatter those ashes with his overbearing family and the woman who has his transplanted heart.

A few years back, I saw an ad for organ donation, and it made me think about the connection between someone who was going to die and the person who would receive one of their organs. I wrote a short film inspired by this idea, but it was super depressing and not at all what I wanted to create. Around the same time, I had been trying to crack a comedy feature about a woman’s relationship with her husband’s pregnant mistress. Somehow, gradually, both ideas merged together. (When in doubt, combine things!)

HOW MANY DRAFTS DID YOU WRITE BEFORE BEING ACCEPTED INTO THE ISA TOP 25 LIST?

Several. I’d say there were probably four major rewrites and A LOT of revisions between those.

WHAT DID YOU LEARN WITH EACH DRAFT?

This script was a process. It evolved over time, as I grew to better understand the characters and themes. I had to make sure I kept a consistent tone and that the more comedic moments still played truthfully. My first draft was fun but a little over the top. My second draft was grounded, but lost the heart and comedy. The third draft was about finding that middle ground. And the fourth draft was really honing in on character and theme.

WHAT INSPIRES YOUR IMAGINATION?

I listen to a lot of podcasts. I love novels, even though I don’t read as often as I’d like these days (insert rant about technology). Sometimes, to get my creativity flowing, I use a random word generator to provide a pair of words. Then, as quickly as possible, I try to come up with a premise or idea inspired by those two words. I’ll do about ten of those in ten to fifteen minutes.

DO YOU HAVE A PREFERRED GENRE, FORMAT, THEME YOU WRITE IN?

I’m happiest when I get to navigate between comedy and drama within the same piece, which is the sweet spot I was working to hit with Scattering Jake. On my own, my work skews more dramatic, but with my writing partner Corinne Caputo, it’s really wacky comedy all the way. I explore questions about the complexities of womanhood and female friendships. I also end up writing about death a lot, which is weird because my fear of death is pretty crippling. I guess it’s a coping mechanism?

HOW DO YOU TRAIN AND IMPROVE YOUR WRITING CRAFT?

I cannot speak strongly enough about the benefits of having a writers group. I meet every Friday with fellow screenwriters here in New York, and that always pushes me to improve. I love hearing talented people talk about craft. I’m a big Scriptnotes podcast fan. I have a Masterclass subscription. I recently took a great course through Sundance’s new online Co//ab initiative.  I’m a nerd, so I immerse myself into craft stuff whenever I can.

DO YOU HAVE ANY MENTORS, HEROES/ HEROINES?

No. I exist entirely in a vacuum.

Kidding. A million. Too many to list. But I’ll try. Michael Arndt is one of my favorite writers. (Back to nerding out about craft, his “Beginnings” and “Endings” videos are amazing.) I already said I love listening to John and Craig on Scriptnotes. Other writers I love… Tony Kushner, Tina Fey, Kay Cannon, Diablo Cody, Aaron Sorkin, Michael Schur, I mean should I keep going? I strive to be an enthusiastic fan whenever possible.

Don’t try to make any sort of list. Just do your best work, from a place of passion, and commit to that above all else.

As a kid, I was inspired by the movie Twister to learn everything about tornados. But I am also deeply terrified by them. In fact, I’ve had so many scary dreams about tornados that I started having dreams where a tornado would be coming and I would announce (in the dream) that I know how to handle the situation because of all my past tornado dreams.
Orginal Article Published: Creative Screenwriting
«Previous Post Next Post»