Everything You've Wanted To Know About Voice Over And Off Screen

Could you please clearly explain O.S. and V.O.? I hear different things from different people, and sometimes I see O.C. in older scripts. I'm starting to get obsessed about this.

In addition to your question above, I have received three other emailed questions in the last couple of days asking me to explain O.S. and V.O., so let's relax and get into it.

O.S. means "off screen" -- the character is physically there at the scene location, but is not in the camera view; in the produced movie, we would hear her voice but not see her, even though she is there at the master (or primary) scene location.

Suppose the scene takes place at SAL'S HOUSE and she is cooking in the KITCHEN while JOE watches TV in the LIVING ROOM. If the camera is on Sal in the KITCHEN, anything Joe says would be marked as O.S. because he is at the master or primary location (SAL'S HOUSE) but is not in the camera view.

V.O. means "voice over" -- a voice originates from outside the scene location. Here are common situations where you would use this notation:

-- A voice originates from outside the scene location through a phone or walkie-talkie or radio or some other device.

-- A character in the scene recalls a speech he heard earlier in the screenplay, such as his mother reminding him to wear a coat. The speech is the mother's, but she is not there at the scene location. Thus, her speech originates from another location, and so it's marked V.O.

-- A character begins to explain what happened a year ago. You cut to a FLASHBACK, but we still hear the character's voice from PRESENT DAY explaining what happened. The voice originates from outside the FLASHBACK location and is marked V.O.

-- We hear a disembodied voice: "Luke, reach out with your feelings" (Obi-wan in Star Wars IV). Whisperings from another world are marked V.O.

-- We hear the character's own thoughts at the moment; that is, the audience sees him and hears his voice, but his lips aren't moving. Thus, the speech originates from another location (probably a recording studio or looping studio). Incidentally, I don't recommend this application; it usually comes off as obvious exposition except in rare instances in broad comedies.

-- A character narrates the story. The voice does not original from any of the scene locations and so it is marked V.O. If you use the term NARRATOR in the character cue (that is, the character name in the dialogue block), then V.O. is assumed and you don't have to use the term.

-- Suppose there is a TV in the scene, and the TV screen is in full view (within the camera frame or view). Technically, the person on the TV screen is at the scene location since the TV is at the scene location. Thus, the character that we see speaking on TV is like any other character in the room. Since we see him speaking, his speech is normal dialogue without any special notation.

-- Holograms as in Star Wars IV: "Help me Obi-wan. You're my only hope." Princess Leia's words would have no special notation since her image is there in the room (at the scene location) and we see her speaking.

Did I miss anything? If you believe I did, then zip me off an email. Meanwhile, keep writing! 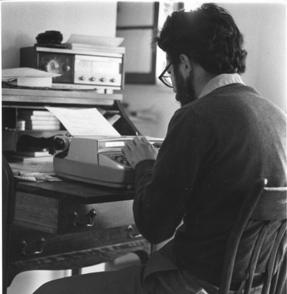 10 of my feature scripts have been produced, and two of my novels have been published, plus several ghostwritten novels.  I've written approximately 65 feature films, mostly on assignment, and am always looking for projects.   MFA USC Cinema, BA English Literature, U. of Kansas.