Film and TV Jessica Sharzer wrote the first episode of the Steven Spielberg, Edward Kitsis, and Adam Horowitz executive produced series Amazing Stories for Apple TV. Creative Screenwriting Magazine caught up with her to discuss her work and her advice for aspiring writers.

“I did not major in film in college. I went to Graduate school for Russian Literature,” said Sharzer, a writer on American Horror Story, Nerve, A Simple Favor, and Apple TV’s Amazing Stories. Clearly still influenced by her Russian studies of tragedy, many of Sharzer’s works are somewhat darker takes on society and technology. “I think it’s the greatest literature ever written,” she said, “I spent some time in Moscow while in college and just took a deep dive into the literature.”

That’s not to say that genre stories must have a rigid framework. “You are playing with expectations, but also trying to subvert where the audience might think it’s going,” she added. “You’re trying to surprise them within the context of the genre. I enjoy those kinds of games.”

On the anthology Ryan Murphy and Brad Falchuk produced TV series, American Horror Story, Sharzer wrote episodes including “I Am Anne Frank: Part 1,” “The Name Game,” and “Pink Cupcakes.” In Nerve, a high school senior gets immersed in a dangerous online version of truth or dare. In A Simple Favor, a single mother befriends a secretive upper-class woman who goes missing. In all cases, she pushed the boundaries of genre conventions. 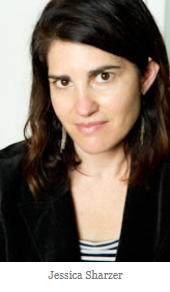 “I don’t necessarily think it’s the job of art to teach or preach lessons, but I do try to reflect our times, even if it’s something not of the present moment. This is also true if it’s a period piece. You want the lens to reveal something about who we are now.” This is particularly true for her Amazing Stories episode, “The Cellar,” which opens the season.

[There are partial spoilers ahead for the first episode of Amazing Stories.]

The story follows Sam, played by O’Brien, where he’s restoring an old Iowa farmhouse and is suddenly transported back to 1919. There, he meets Evelyn, played by Pedretti, who is essentially being pushed into an arranged marriage by her mother, when she simply wants to follow a potential career as a singer.

“It was fun to look back at a time where women didn’t enjoy the kinds of freedom and upward mobility we have now. And, this wasn’t that long ago. It’s about 100 years earlier and the choices for women were so limited. That was an interesting way to talk about how women are still limited in the film industry,” recalled Sharzer.

Because there are so few female writers and directors in the industry, the right take on the story was particularly important to Sharzer. “I don’t want to stuff a message down anyone’s throat. I don’t want it to feel like medicine. In TV or movies, first and foremost, it has to be entertaining. Then, if it can have a social message or commentary built in that feels organic. I’m all for it, but I don’t start there.”

Within these parameters, the struggle was also not to make the love story too predictable. “You want to do it in a way that feels surprising and comes from character development, rather than the mechanisms of the plot. That was something we argued about and wrestled with in the TV writers’ room. What ends up coming out is what people really view about love.”

Sharzer added that “those values and beliefs ended up coming out in the writers’ room.” Personally, she was more focused on the pessimistic side while other writers were more focused on the optimistic nature of love. “In the end, both characters discover they’re better suited in other worlds, even if that means making a sacrifice.”

“For me, it was more about both of them finding their place in the world and less about career. It was about not feeling at home in your own life. Both were a little lost and trapped in their current states. They bonded, fell in love, and were able to give each other this new life in an unexpected way.”

This particular episode idea actually came from Spielberg. “I think mine was the only episode that came directly from him, so this had been an idea he had been kicking around back when the original Amazing Stories was made in the 1980s. That was a really great gift because I don’t know if I would have come up with anything like this on my own. It has more innocence and romanticism about it.”

She continued, “But the great thing about being a TV writer is that you get to work through someone else’s voice, other than your own. So getting inside Spielberg’s head for a little while and trying to figure out what he wanted from that idea was a really exciting opportunity.”

The TV series, meant for four-quadrant family viewing, was designed for everyone. “The original Amazing Stories series was beloved by younger people. My generation grew up on that show when they were teens, and we wanted that audience again.”

In the current series, viewers may notice some Apple products, such as the new iPhone, a weather app, and headphones, but Sharzer said the company actually told them to downplay any product placement rather than feel like an infomercial.

“They’re [Apple] a new company in the streaming world. It’s a really exciting place to work and they have a huge appetite for doing cutting edge, interesting, varied programming. I’m currently overseeing a project that’s being developed in their International division that’s a really exciting Asian-set epic.” 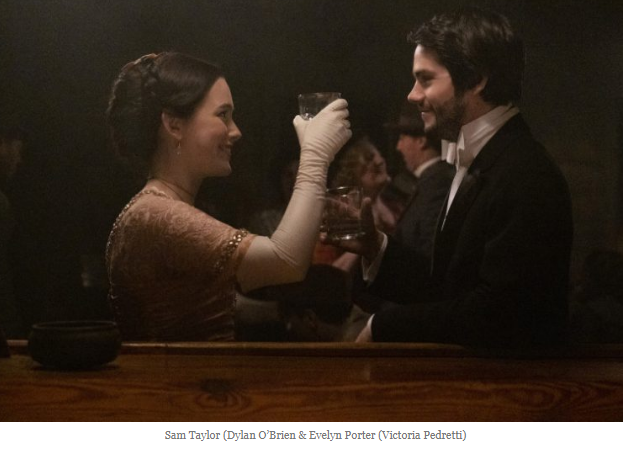 A CAREER IN TELEVISION

With experience writing for Apple and FX, the screenwriter credits her longevity on simply being able to take notes as a writer in Hollywood. “I think being able to take notes and adapt to the team around you – producers, directors, executives – is a group effort, even if you are the only one with your name on the cover page. There’s a lot of money at stake for everyone involved. If you approach it like you’re the only expert, I think you’ll have a short-lived career in Hollywood.”

She added that there is also a “note behind the note,” meaning you need to examine the scene the note is in, even if the note itself doesn’t appear to help the story. “Even if the project doesn’t work out, I want people to think I took the notes and did my best.”

In addition, screenwriters also need to work rather quickly. “A lot of newer writers take two years to write a screenplay and if you’re going to be a professional writer, no one is going to give you two years to write anything. You have to learn to discipline yourself, sit down like it’s a real job, inspired or not, and turn out material. Even when I’m working from home, I try not to work from home. I treat it like a job.”

While working in the television field, Sharzer also wants new writers to understand that you are there to help, not re-create a show. “No one has hired you to come up with a better version of the show. You’ve been hired to make the life of the showrunner better and easier. That’s how I approach it. It’s the same thing with movies. When the director is hired, it becomes the director’s movie, and that’s hard for writers to accept.”

She added, “At the end of the day, there has to be one person to say yes or no, and that’s the director’s job. That’s something I remind myself even when I get notes I don’t agree with. It’s the director’s movie.”

1. Consider their dream job and work backwards. This way, they’re at least moving in the right direction as they begin their 10,000 hours of writing to hone their craft.

2. Write stories you love rather than trying to please the market. “Whatever the trend is now, when you finish your script, the trend is going to be something else. Trying to second guess the market is a fool’s errand.”

She tells her students to list their favorite movies, TV shows, and books, then look for commonalities. “Is every story a certain genre? Is every story about an underdog? Is every story an ensemble rather than a single lead? Those are the kinds of questions I ask before I write anything. What would I write that would fit on the same Netflix row as those shows?”

In addition, she still learns various aspects of the screenwriting craft from her time as a teacher. “As a writer, you’re always wrestling with the same set of tools. That doesn’t change as you move forward in your career. It’s the same stuff, so for me to review the structure of a screenplay or how to break act breaks. The exercises I do with my students are also for me. They always ask great questions. It helps me remind myself of what really matters and makes my writing better.”

Removing the romanticism from the writing process, Jessica Sharzer says the Malcolm Gladwell 10,000 hour rule has some merit to it. At the same time, when she feels somewhat stuck, she gives herself challenges as a screenwriter. “I won’t let myself off the hook. You have to give yourself deadlines even if you have a full-time job.”

“If you can only write 10 pages a week, then in 3 months, you’re done with a script. That’s fast, actually. Give yourself those hard deadlines. If you miss a week, you owe those pages next week. If you hope to get paid one day, take it seriously, even when no one is paying you. It took me years to develop this discipline, but over time, I learned how to commit to deadlines, expectations, and pivot when somebody isn’t happy with my work. I’ve had people throw out entire drafts and say, ‘Start over,’ but you have to be willing to do that.”

To do a page one rewrite is a daunting task, to say the least. The screenwriter advises writers in this situation to “think of the opposite.” She elaborated, “Start the character in the opposite position. If the character gets everything they want by the midpoint, what’s the opposite of that and what would that change do to the story? It may not be right, but it may unlock something by swinging the pendulum in the other direction, so you can open your mind to other possibilities.”

She’s also not precious with the page. “I’m also not afraid to throw things away. The writing phase is the cheapest phase. If you throw away a screenplay, aside from time, you haven’t cost the production anything. It costs a pad of paper to change your mind. It’s the easiest and cheapest phase to make changes. In production, it’s harder and harder. In the editing room, then, you’re limited to the footage you have. If you’re lucky enough to get reshoots, those are targeted to one problem. You have to identify the problem and fix it in the most surgical way.”