“Get Your Script Remembered”

“Get Your Script Remembered” Rachel Shukert on ‘The Baby-Sitters Club’, ‘The Handmaid’s Tale’, ‘GLOW’, & ‘Supergirl’:

“I’d always been a film and television buff,” said Rachel Shukert. “I started my career in theater as a playwright and actor. That’s what I thought I was going to do because it seemed accessible,” said the Omaha native who grew up in the theater scene.

“I never thought about being a writer because I never realized anyone did that because all the plays we did, the writers were long gone. So I didn’t realize it was something you could do.” When Shukert went to NYU, this view changed. 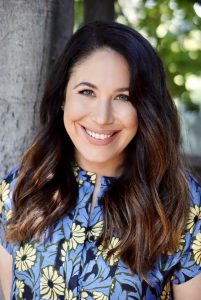 As a writer, she’s known for working on Supergirl, GLOW, Cursed, The Handmaid’s Tale, and Netflix’s The Baby-Sitters Club, where she’s also been producing since 2019. Across the board, she’s well known for crafting a compelling female voice.

“My generation is perhaps the first generation to have prominent female playwrights. Maybe that’s not fair to say, but it’s more about awareness that that is something people need to pay attention to,” she added. “As a woman, it did not occur to me as a girl in Nebraska that women could do that.”

“Very few directors, very few writers were women. I didn’t have a lot of role models, but I did find myself connecting to characters. Some of these characters came from Tennessee Williams (A Streetcar Named Desires, Cat on a Hot Tin Roof). I would read these plays over and over again.”

“That was my way in. Figuring out how to transfer my voice and my thoughts into something like that.”

Red Band Society was Shukert’s first staff job thanks to a friendship with Creator Margaret Nagle (Boardwalk Empire, The Good Lie). “That was kind of a fluke,” she joked. “I feel like I got lucky. I had been writing a lot, in theater, in magazines, and I had published four books, so I was experienced, but I lucked into getting staffed.”

She described this first job as a “long learning curve” as writing alone versus writing in a room are quite different. Red Band Society was canceled after a season, but with a writing credit on her resume and time to write a new sample, she found herself an interview on the series Supergirl.

The spec script that helped her land this job was an original story called Wendy Darling. “It was an imaginative story about Wendy from Peter Pan. She had grown up and after she came back from Neverland, and became a nurse in WWI. She was living in this [unworthy place] and gets dragged back into the past. It was a revisioning sequel.”

For this pitch, Shukert had somewhat of a step ahead of other scripts because readers already had some idea as to who Wendy was, so they didn’t need much backstory. “When I’m hiring, you’re reading so many scripts, probably 300-400 submissions, so having a hooky idea would get my attention.”

She continued, “You find yourself reading yet another cop drama spec or another half hour about dating in LA, even with great writing, they kind of blend together. Some voices are undeniable, but a hooky concept that people can grab really helps you get noticed. It’s just about getting your script remembered.”

“I definitely seem to write about women,” she said, when asked about her collection of work in hindsight. “All of my shows – and right now I’m working on The Handmaid’s Tale which is tonally different from The Babysitters Club – they’re all about women with projects.”

Within these projects, the shows focus on interpersonal dynamics, friendships, relationships, and “women with ambition,” which she believes is the “connective tissue of her work.” On a show like GLOW, where there are essentially 14 female leads, the show is all about character. “I think it’s less difficult to differentiate characters from each other, in terms of their points-of-view, because it’s important to be specific about who you are writing about.”

She continued, “If you think about it, you know 14 people in your life and they’re all different and unique. The bigger challenge with a cast like GLOW – and with The Baby-Sitters Club where we have 7 regulars – is just finding the time to service all those characters and giving them all something substantial to do.”

Since each show is limited with time, it’s vital to have crucial moments for each character. “You have to find time for each character to shine. What is compelling about those characters?” It’s also crucial to outline all of these arcs logistically, particularly with main characters (Alison Brie, Betty Gilpin, & Marc Maron).

“We wanted to talk about each character, their arc, their trajectory, and then we wrote those up in little season bibles. We would put those on a big board, almost like a map for the season.”

For The Baby-Sitters Club, the episodes are all loosely based on the book series from Ann M. Martin. “The rule is that each episode had to have a title from the actual book and there needed to be this shifting narration, so this might be Claudia’s episode, and we would figure out how the other characters fit into that story, or had their own stories around it.”

In terms of tone, the series is more modern than the books which take place between 1986 and 2000. “We updated the way the girls talk, the relationships with the parents, new families they’re in, but we really wanted the best part of the books – friendship, community, positive lessons – and preserve that.”

“I think all movies are for everyone,” she said. “I try not to think about what’s for women. You need to fill out your female characters as characters, the way you would for men,” she said, in regards to the dangers of cosmetic changes without depth. “Don’t just swap out a woman in an action movie.”

“Don’t simplify characters. It’s done to not seem sexist, but then it becomes sexist. Like if a woman has a flaw, that makes her not relatable. But that’s crazy because flaws make you relatable. But anytime you swap a character without depth it would be bad storytelling.” She continued, “Flesh the character out. Make the story work. Writing compelling characters. I tend to write about women because I am one, but I don’t think it’s inherently different to write a good male character.”

As for writerly advice, Shukert would tell you “everything is possible” and “nothing is possible.” To expand on this, writers should believe everything is possible, while producers are more keen to see the natural limitations of budget. Regardless, she adds, “Let yourself think as big as you can when writing, then make adjustments when your show gets picked up. Don’t be inhibited in the beginning, and once you know your limitations, that can actually be freeing because it’s like a jigsaw puzzle. Sometimes the limitations help.”

“With a novel, you can have these flights of fancy, a scene can happen in someone’s head, you can linger in a place for a long time, there’s no rules but in television or film, you have this long piece of string. It’s gone on before and it can go on after, but your job is to figure out what’s the most interesting piece of string from here to here. What’s the snapshot of this scene?”