There are many screenplays available online, but one in particular has some terrific lessons in it regarding the streamlining of a story, and what decisions are made between the page and the screen that can be particularly instructive to writers.

That screenplay is Groundhog Day, the second revision by the late (and hugely lamented) Harold Ramis, which can easily be found on the Internet: http://www.dailyscript.com/scripts/groundhogday.pdf

Read the script, and then watch the movie. There are dozens of changes, big and small. There isn’t room here to list them all, so let’s pick a few of the more significant ones.

From a purely nuts and bolts standpoint, the film’s credits find Danny Rubin—listed on this version of the script as sole writer–as “story by” with final screenplay by Mr. Rubin and Mr. Ramis. I cannot claim to be anywhere near the development process of Groundhog Day, but it’s clear that a productive meeting of the minds happened, resulting in a film that grossed over $70 million in 1993, and a script that is ranked 27th among the 101 greatest screenplays of all time by the Writers Guild of America.

As Danny Rubin himself points out in the foreword to Paul Hannam’s book The Magic of Groundhog Day: Transform Your Life Day by Day, “Everybody was applying the concepts from Groundhog Day to their own lives and disciplines, everyone seeing themselves in the movie and the movie in themselves.”

Danny Rubin is a very funny writer, and there are a lot of great joke lines in the screenplay, along with a lot of fun, cathartic and outrageous scenes in which Phil Connors, the weatherman cursed to relive the same day over and over, reacts to and exploits his situation.

But a good portion of them did not make it into the final theatrical version. As writers, when we formulate a massively catchy concept like a repeating day, we tend to want to make sure that all the logical permutations of our premise are shown, with no stone unturned.  It’s what might be called the “what would happen?” syndrome. In the what would happen world, sometimes, (and maybe in this case as the screenplay was being reworked), the premise takes over the story and becomes the raison d’être of the piece. Again, these scenes in the screenplay are goofy and endearing. but, somewhere along the line, somebody decided that every possible silly result of Phil’s curse was not what Groundhog Day was about.  In fact, Groundhog Day is about the self-centered Phil (Bill Murray) finding redemption through the open hearted Rita (Andie MacDowell). It’s a romance. It’s a story about two people, not about a premise. A fine piece of advice for screenwriters.  (The movie never even mentions how many days Phil might be reliving. The screenplay hints at an actual number.) 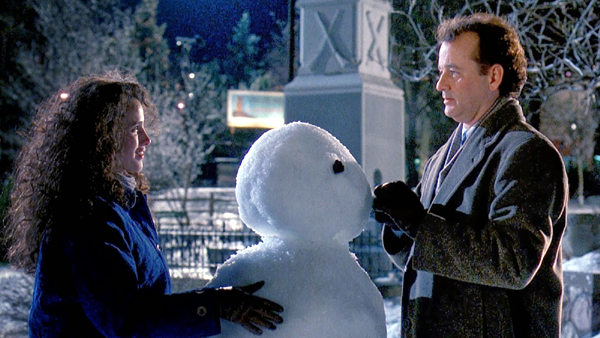 To that end, the movie version, once Phil realizes he can exploit the day for his own purposes (in the scene when he drives recklessly with two drunken locals, gets thrown in jail), cuts a bunch of Phil’s “acting out” scenes and does a quick one-two-three on his pranks. First, he seduces Nancy by memorizing her personal information, then he robs the armored car in one fluid motion based on his precise knowledge of the repeating day (in the screenplay it is a comical staged robbery that does not refer to his working within the day’s details), then he takes his scantily-clad date to the movies while living out his Clint Eastwood Man With No Name fantasy. From that point on, it’s the Phil and Rita show, as he tries to use his newfound power to seduce her, too, and eventually comes to the realization that helping others is where it’s at.

The screenplay also has sidebars about kids in a classroom and reading fairy tales and kissing a frog prince. All perfectly acceptable thematic symbols, but completely gone from the movie version, aside from one stray “princess” line from Phil.  Here again, a very interesting decision was made between script and screen. It would seem that it was ultimately determined that Phil and Rita themselves represented all the fairy tale romance we needed, and that drawing parallels between them and an actual fairy tale was unnecessary lily-gilding.  The action of the story and its protagonists tell us what we need to know—a great lesson for we screenwriters who may want to heap on the symbols. Similarly, the script opens with an image of hibernating groundhogs. The movie opens in the sky, the weather being something Phil thinks he controls. The latter centered in character, the former centered in symbols. And since Phil has the same name as the groundhog, that symbolism is already firmly in place.

The script ends with some narration describing how important it is to value every day. This was understandably cut from the film version: if we have not received this message from the unfolding of the story itself, we are in trouble! (Another lesson: watch the tendency to let narration explain what we have already gleaned). Finally, a coda in the script brings back the recurring joke with Ned Ryerson, the pushy insurance salesman. It’s a small but important change when the movie moves that back a bit, resolves Ned in an earlier scene, and ends the film with Phil and Rita alone, in love.  Their story, their ending. Keep the story focused. 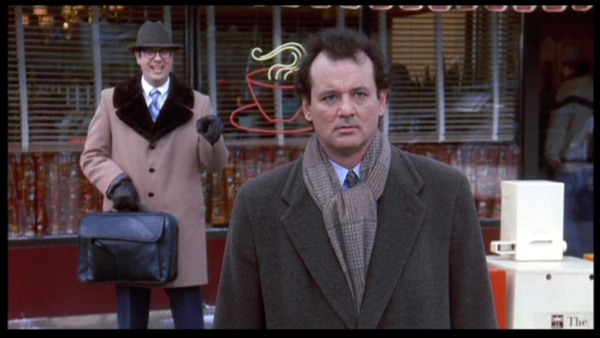 Ah, but now we save the absolute best for last.

In this version of the screenplay, Phil has wronged a woman named Stephanie, who enacts the curse that lands Phil in the repeating day. In the movie version, as we are all most likely aware, there is no Stephanie. No externally placed curse.  Phil simply awakens in his Groundhog Day predicament without explanation. Since the screenplay never resolves Stephanie’s role, it might have been that removing her from the story was merely a judicious way to avoid including her.  It might also have been a conscious decision to simply have Groundhog Day happen, rather than be brought about by anything Phil specifically did. This possibility is also borne out by the film version, which declines to set Phil up as anything but an egotistical jerk, taking out several pages of screenplay in which he is established as a kind of a frat boy slob—and thereby moving the action to Punxsutawney within the first six minutes, shaving several pages off the set-up.

No matter what the motivation, the decision to cut out any reason for Phil’s fate was a stroke of genius. If Phil had done something we could identify as the one, stupid thing that brought about his curse, then we could put ourselves above him. We could point to his misconduct and wait for his comeuppance as a storyline outside of our own experience. When, instead, Phil simply wakes up in Groundhog Day, he is every one of us. He is all the times each of us has slipped into arrogance, uncaring or, really, the ultimate sin in the film version of the story, complacency. We leave the final, theatrical version of Groundhog Day feeling, even if only for an instant, that the worst thing we could ever do is not value every single moment in which we are blessed with being alive. This is the “seeing themselves in the movie and the movie in themselves” of which Danny Rubin speaks.

Studying what stayed and what went in Groundhog Day’s transition to the screen contains real, quantifiable lessons for our own screenwriting technique.  But, in the end, however the estimable Mssrs. Rubin and Ramis and the entire team responsible for this remarkable film got us there, we will always be grateful.