How Has The Character Of James Bond Evolved? (Part 2)

This is the second part of our series on the evolution of James Bond and his immense cultural impact. It all began in the imagination of Ian Lancaster Fleming, a prolific British writer, and Naval Intelligence Officer.

The sophisticated spy has been walking the earth since 1953, first splashed on the pages of Ian Fleming’s twelve novels and two short-story collections. Dying only eleven years after the release of his first book, Casino Royale, Fleming couldn’t have foreseen the colossal influence his stories would have on the world. But the stories began with Fleming’s OWN story. During the firestorms of World War II in 1939, Admiral John Godfrey, Director of Naval Intelligence of the Royal Navy, recruited the 31-year-old to become his personal assistant. Godfrey soon assigned Fleming the codename 17F and sent him to Spain to orchestrate a mission called Operation Goldeneye. Launching sabotage operations against the Nazis while maintaining an intelligence framework in the event of an invasion, this led to a collaboration on writing the blueprint for the Office of the Coordinator of Information, which turned into the Office of Strategic Services and eventually the formation of the CIA. 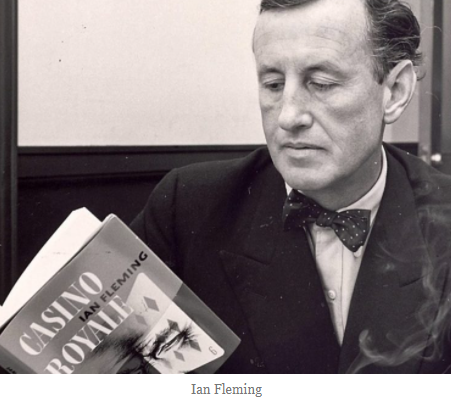 Fleming’s fascination with espionage only grew stronger, but so did his phobia to commitment as his wedding to a pregnant Ann Charetis was approaching. Edging towards retirement and wanting to distract himself, he collected the stories swirling around in his mind. At a party, he whispered to a friend: “I am going to write the spy story to end all spy stories.” And then he did, hidden in his Oracabessa Bay estate in Jamaica, which he called Goldeneye.

Inspired by H.C. McNeile’s Bulldog Drummond tales, he wrote just two months out of each year—January and February—and listened to the waves while daydreaming on the beach. When he got too hot, he went inside to clack on his typewriter, always insisting his maids and staff address him as “The Commander.”

Reinhard Denke, writer of the screenplays Bigtime and Sex, Greed, Money, Murder and Chicken Fried Steak, said, “Fleming, a thoughtful, wildly curious, complex man, battled his own menacing demons; alcoholism, addiction, and fear of growing old. Fleming carried on conspicuous affairs with the wives of Jamaica’s ex-pat elite, tempting fate and his own safety. He purportedly put away a bottle of gin and smoked up to seventy cigarettes a day. His profligate disregard for his own health led to his premature death at fifty-six.

The Bond Fleming envisioned was autobiographical. Bond was, like Fleming, a heavy drinker, and smoker, a womanizer with enormous appetites. The Bond of Fleming’s books was also sadistic, resentful, he dispatched his enemies with overkill.”

Producer/Writer/Director David H. Steinberg, who wrote the screenplays for American Pie 2, Slackers, National Lampoon’s Barely Legal, and is currently the Executive Producer and Showrunner for the Netflix-streaming No Good Nick, stated, “I know you’re supposed to say Sean Connery was the best James Bond—and he certainly was the coolest of them all—but I grew up with Roger Moore and the idea that James Bond could be deadly AND funny really spoke to me. Comparing the two, Moore makes Connery seem stiff and so self-serious. And that’s what I love about the franchise—it teaches you it’s okay to not take itself so seriously. And this may be controversial but my #2 is George Lazenby. He’s the only Bond to essentially break the fourth wall (‘This never happened to the other fellow.’), and I love a character who’s aware of the conventions of the genre. I’d also say that the evolution of Bond tracks the evolution of writing for film in general. At some point, it just wasn’t enough to have the character go through the motions.” 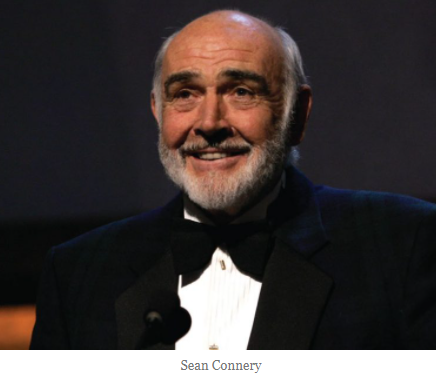 Writer/Producer/Director Matt Nix, and Creator of the USA Network series Burn Notice and The Good Guys and The Gifted on Fox, holds his own truth: “Least favorite…while I think Daniel Craig is an excellent actor and did a great portrayal, I don’t really like the trend toward making Bond more ‘real.’ They may be better movies, in a sense, but in making Bond too specific he loses the timeless quality that makes him Bond. A kid watching the Daniel Craig version of Bond today isn’t going to understand the character the same way people have since the beginning of the Bond films. He becomes a very particular guy with a very particular story and set of issues. And part of the magic of Bond is that for generations, people have been able to watch these movies and understand that the character is a mask that is picked up and put down by different actors. No one asks why Bond never ages or develops liver disease from his drinking. When we turn him into a ‘real’ guy, we lose that. I think what’s fascinating about Bond is the fact that he CAN be played by such different actors because he’s an archetype more than a character per se.

Every spy character, no matter how realistic or stylized, is seen in terms of Bond. You can write a Bond-redux character or you can write the anti-Bond, but if you work in the spy genre you can never escape the shadow of Bond.”

Adaptations have run rampant over time. Among them: A BBC documentary series called Omnibus: The British Hero, the James Bond Jr. children’s spin-off cartoon, a South African radio broadcast based on the Moonraker novel, five more radio broadcasts for BBC—You Only Live Twice, Dr. No, Goldfinger, On Her Majesty’s Secret Service, From Russia With Love and Die Another Day—with charismatic voices intimidating Bond and the villains, illustrated comics printed by mega-publishers like DC and Marvel, authorized novelizations by eight additional authors, parodies and spoofs like 1967’s Casino Royale with David Niven, Mike Myers’ Austin Powers series, Get Smart and, of course, a storm surge of videogames that became a gargantuan tidal wave crashing across platforms like Nintendo and PlayStation. First-person shooter games were never the same when Nintendo 64 released GoldenEye 007, which has burned into every 1990s kid’s memory. Everything together, the franchise has grossed over $20 billion.

“Moore’s interpretation was mild until he broke out with The Spy Who Loved Me,” reflected IndieScene CEO Shawn Dawes. “As Dalton took over the franchise for his two films, it felt like a shift in narrative wherein the focus turned to the storyline rather than the 007 character. Pierce Bronsan reclaimed the rogue playboy starting with Goldeneye and throughout the next three films including a subpar reviewed Die Another Day. Daniel Craig was then selected to re-vamp and basically remake the James Bond franchise, this time creating a gritty character that truly became an underdog you root for at every turn. Where will 007 end up? We’ll see after No Time To Die. But rest assured, the next 007 won’t disappoint.”

Matthew Helderman, Founder, and CEO of Buffalo 8 and Co-founder of media financing firm BondIt Media Capital, observed this revolutionizing element: “I’m partial to Daniel Craig, which I have been given some guff from friends in Europe who are purists to Sean Connery and Roger Moore as the ‘real James Bonds,’ but for me, Daniel Craig re-invented the character with Casino Royale and for the past fifteen years, he has been such an exciting James Bond both because of the way he’s approached the character with a more steely exterior physically and emotionally while also collaborating with Sam Mendes to make, in my opinion, two of the most exciting and cinematic Bond films of all time.” 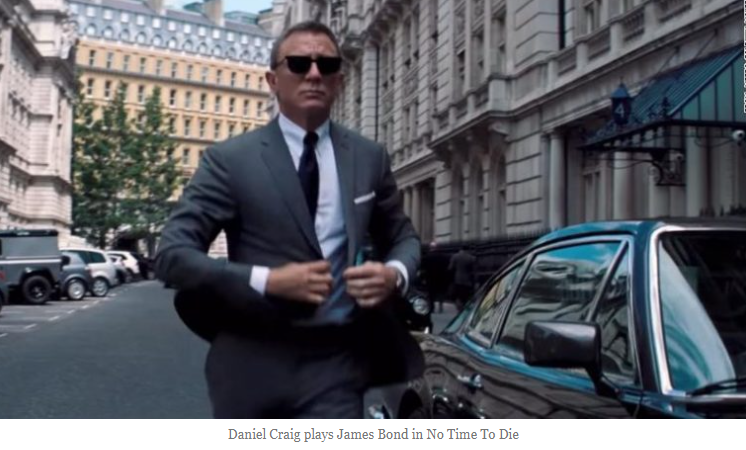 “It’s really interesting the way the character evolved with the way movies and the world evolved, said Rebecca Berrih of Elysian Fields Entertainment. “During the Sean Connery-era, James Bond is more macho and arrogant. Roger Moore is all about gadgets and fighting the Russians, which was the idea of the time. Daniel Craig dynamited the whole character; he is still sure of himself and is so strong he is also human and vulnerable. He is heartbroken when Vesper Lynd dies as Sean Connery barely registered Jill Masterson’s death in Goldfinger. Daniel Craig’s era is darker, realistic, more personal, and emotional, very much the way Chris Nolan made superhero way more realistic with Batman Begins and then with The Dark Knight.

Mary Aloe, Producer at Aloe Entertainment, (Bruised, Worth, and Wander), touched on the influence of women in anything related to the Bond franchise.  “As an American girl/woman, I grew up with James Bond inspiring me—that even in the toughest situations, there was a way out. Never say never, good versus evil. Connery was and always will be THE James Bond, to my sisters who are a decade older than me, my oldest even named one of her sons after Sean. I loved him too but I grew up and went to the theaters seeing Roger Moore and Pierce Brosnan and, of course, Daniel Craig now. The evolution of equality for men and women has had a reflection on Bond in some way. From my perspective, the women have become more and more powerful in the Bonds; not just hot 10’s props next to a very sexy Brit 007. While they are all still beautiful, there is more purpose for them to work with or against Bond—more equally. This is just my perspective as a woman. That being said, my favorite Bond…hmm a toss-up between Moore and Brosnan!  One thing I can say; the new Bond, from what I hear, will mark the real evolution.”
No Time To Die, Craig’s final Bond film, will be released in 2021. As for who will step up to the mantel afterward, keeping in mind all the controversial candidates that have surfaced over the years, there are rumors of Tom Hardy, Richard Madden, Henry Cavill, but no one knows for sure.

Denke counts 007 and Ian Fleming as the inspiration to go into the movies. “One might argue the Bond franchise has stronger corporate branding than even the Walt Disney Corporation; the Aston Martin DB5, smoky European casinos, Anthony Sinclair suits, martinis, Q-branch, eccentric villains, Ken Adam’s extraordinary production design, exotic locales. One can argue who is the better Bond, but the truth is that franchise is so strong it has survived strong and weak actors and will continue. Those films are everything movies should be. They take us into a unique world you don’t want to leave.”