Since its purchase by Disney and the success of The Force Awakens, the Star Wars franchise has had a resurgence in popularity. Before this, however, the iconic series’ reputation had been tarnished by the controversial prequel trilogy, which began with 1999’s Episode I: The Phantom Menace.

While writer/director George Lucas’ return to his galaxy far, far away was a box office success, many viewers found themselves disappointed, and The Phantom Menace has slowly earned a reputation for being the low point in the Star Wars saga.

Aspiring screenwriters are often advised to study cinema’s greatest scripts for inspiration. But vital lessons can also be learned from scripts that aren’t so good. And with that in mind, let’s take apart The Phantom Menace and see what not to do.

Taking its inspiration from the Flash Gordon serials, the 1977 Star Wars captivated viewers with its simple but instantly iconic world, in which the valiant Rebels fought against the evil Empire – a conflict which could be understood right from the opening scene.

The opening crawl of The Phantom Menace, however, discusses “taxation of trade routes” and the congress of the Republic endlessly debating. 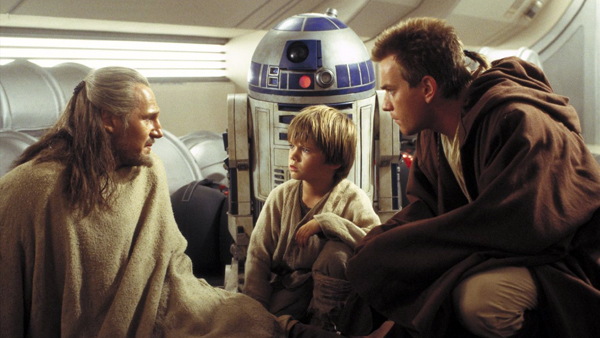 This makes it clear that this is a very different tone for the Star Wars galaxy. And indeed, the film is heavy on plot details, often at the expense of dramatic stakes. The Coruscant scenes in particular, set in the Republic Senate and the offices of various figures related to it, see much discussion of peace treaties and trade embargoes, and other inherently undramatic concepts. This seriously stalls the film’s momentum. Unlike the original trilogy, this isn’t a film where the heroes simply fight the good fight against evil. It is one where they take it to a committee first.

This isn’t to say that politics should be kept out of sci-fi. But the original Star Wars films were primarily family films, for the kids as much as for sci-fi fans. And with The Phantom Menace, George Lucas neglected to convey the same spirit of adventure and wonder needed to enthrall a new generation. It’s an important reminder that writers should keep in mind who it is they are writing for.

As a result of this complex set-up, The Phantom Menace is very dialogue-heavy. The Senate hearings and surrounding scenes feature too much focus on discussion, thereby breaking the much-quoted rule of “show, don’t tell”.

Here’s an extract from one of those scenes:

PALPATINE is pacing as Capt. Panaka enters. EIRTAE and RABE stand to one side.

…the Republic is not what it once was. The Senate is full of greedy, squabbling delegates who are only looking out for themselves and their home systems. There is no interest in the common good… no civility, only politics… it’s disgusting. I must be frank, Your Majesty, there is little chance the Senate will act on the invasion.

Chancellor Valorum seems to think there is hope.

If I may say so, Your Majesty, the Chancellor has little real power… he is mired down by baseless accusations of corruption. A manufactured scandal surrounds him. The bureaucrats are in charge now.

What options do we have?

Our best choice would be to push for the election of a stronger Supreme Chancellor. One who will take control of the bureaucrats, enforce the laws, and give us justice. You could call for a vote of no confidence in Chancellor Valorum.

He has been our strongest supporter. Is there any other way?

There’s no time for that. The courts take even longer to decide things than the Senate. Our people are dying, Senator… more and more each day. We must do something quickly to stop the Federation.

This is a slow scene, bogged down in telling us political details that are ultimately irrelevant. Not only that, but this is how the film lets us know the stakes: we’re constantly told that people are dying on Naboo, but never shown this.

The same mistake was made earlier on in the film. When the heroes are stranded on Tatooine, their motivation for leaving the planet is to inform the Senate that Naboo’s citizens may be being slaughtered. But by failing to show us this, the film fails to convince us of any urgency.

The 1977 Star Wars, in comparison, has very few scenes like this. The only comparable scene of bureaucratic discussion is punctuated by Darth Vader strangling one of his officers – clearly showing us his evil, whilst the threat of the Death Star is firmly established by the visible destruction of Alderaan.

Similarly, The Phantom Menace’s script tells us that Anakin Skywalker and his mother Shmi have it bad as slaves. But not one single incident makes their lives look difficult. If anything, they have a rather cozy house in which to tell us this.

In contrast, the original Star Wars shows us Luke finding his foster parents dead and their house a smoldering wreck, which visually establishes the evils of the Empire.

Writers can learn from this the importance of visualizing the problems facing characters and their world. Here, the failure to put Anakin’s difficulties onto screen makes it much harder to care for him as a character. Which brings us on to the film’s biggest problem…

The Characters Are All Boring

Perhaps the most damning element of The Phantom Menace is how uninspiring literally every one of its characters is.

For starters, there’s no clear protagonist, with Anakin being the obvious choice, but only appearing forty-five minutes in. Perhaps Obi-Wan Kenobi should be the lead; fans were, after all, excited to see Ewan McGregor’s take on the character made famous by Alec Guiness. However, watch The Phantom Menace and describe Obi-Wan’s personality. It’s difficult, as he has no defining characteristics, no clear arc, and sits out a big chunk of the plot as the even less interesting Qui-Gon explores Tatooine.

The stale dynamic between Obi-Wan and Qui-Gon demonstrates how indistinct they are. They’re paired together from the start, but there’s never any sign of conflict of personality between them.

Compare this to the eager young student/wise old master dynamic of Luke and Ben Kenobi, or the way Chewbacca acts as both a target for Han Solo’s quips and his moral compass. Or Finn and Rey’s bickering, with him trying to hide the truth of his background from her. With Obi-Wan and Qui-Gon: absolutely nothing but service to the plot.

When Anakin is introduced, the script makes some effort to get us to sympathize with him, but as mentioned above, it doesn’t commit to actually showing us this. The film is more interested in whether he’ll win the podrace than the difficulties of life as a slave, and we don’t get any emotional depth which can compare to Luke’s frustration at being isolated on Tatooine in A New Hope, followed by his grief at the Empire’s slaughtering of his family.

It’s the same with Queen Amidala. In this script, characters serve plot functions rather than stories about them as people. As a result, there’s no reason for us to like any of them. Developing interesting, distinct characters and letting them guide the story, rather than vice versa, should be a priority for any screenwriter.

The only character who really makes an impression is Jar Jar Binks – and that’s not exactly a good impression.

List as many quotes as you can from the Star Wars franchise. You’ll probably manage a fair few, from iconic moments like “That’s no moon” and “Chewie, we’re home”, to comedic quips like “Let the Wookiee win” and “Oh, you’re cold?” Star Wars’ snappy, memorable dialogue has played an important role in the franchise and its characters securing their places in pop culture. 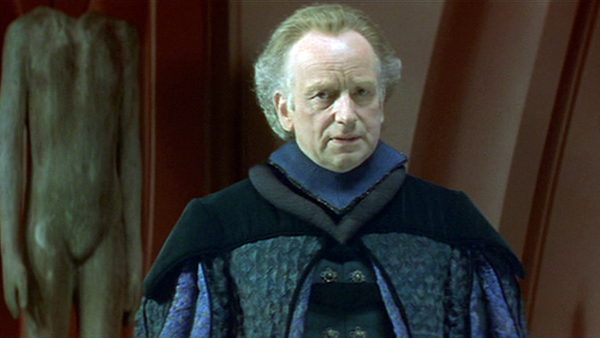 And yet very few of those lines will be from the prequels; fewer still from The Phantom Menace.

The dry tone of the plot is mirrored in the dialogue, which only makes the film’s dialogue-heavy sequences more of a drag. The script lacks energy because it lacks humor, only increasing the inability of the characters to keep the viewers’ interest. The main attempt at comic relief is Jar Jar Binks’ endless clumsy antics, which are generally regarded as more annoying than entertaining.

If anything, you’ll remember the lines that stick out because of how bad they are, such Anakin’s first line to the girl who’ll one day be his wife, as “Are you an angel?” Although to be fair, that relationship has already been made awkward before he’s opened his mouth by the age difference between them, though that is a casting problem rather than a script one.

A redraft to spruce up the dialogue could have made a big difference in keeping viewers’ attentions. The take-away from this is that some memorable lines with a sense of humor can determine whether or not your script sticks in a reader’s mind.

Very few scripts are entirely watertight in terms of plotting. But when the decisions characters make are so obviously, noticeably moronic, it damages the film’s credibility.

Why does Qui-Gon take Watto on his word that no one else in town has the ship parts needed, and why the complicated set of deals to secure those parts? What exactly is the point of the mission to capture Viceroy Gunray, and why does the Queen lead the mission? And why does Qui-Gon bring the nine-year-old Anakin into this battle with him and only then tell him to find a place to hide?

The answer: to get the characters into place to bring about the next set piece. There are issues like this throughout The Phantom Menace, and a likely reason is Lucas’ insistence on having complete control over the script. Had he invited a co-writer on board, problems could have been identified and the script as a whole made smoother.

When writing – and, perhaps more importantly, when re-writing – question all your characters’ decisions. If they’re making odd choices simply because of where you want them to end up, this could seriously damage a reader’s immersion. In such a case, you’d be better off revising your story to ensure that both story logic and character motivation make sense.

But more than anything, The Phantom Menace lacks the sense of fun found in its predecessors. All the problems we’ve explored come together to make it, on a fundamental level, simply not enjoyable.

Perhaps if it had captured the spirit of the original trilogy, its many sins may be forgiven. But as much as it wants to fill in gaps in Lucas’ mythology, it simply fails to play to existing fans.

There are so many problems with The Phantom Menace’s script that it’s really difficult to appreciate the movie. It is possible, however, to learn from its mistakes, and I hope you’ve picked up some screenwriting tips from what Lucas did wrong.

By contrast, the more successful Force Awakens was full of little nods and knowing moments – moments that cemented it as not just a movie set in the Star Wars universe, but a Star Wars movie.

Similarly, the recent Rogue One was not only a prequel, but we went into it knowing how it would end. Yet rather than being marred by this same inevitability, Chris Weitz and Tony Gilroy’s script captures the sense of fun and adventure of the 1977’s Star Wars, and gives us interesting characters we can care about.