Mine the Material for Something Great

“I was always really enamored with entertainment, even as a small child,” said screenwriter Liz Feldman, adding, “so much so that at the age of ten, I asked for an agent for my birthday from my parents – not at all aware that’s not how it works.”

Feldman grew up in Brooklyn and did follow her pursuit at an early age, doing stand-up at age 16, and eventually landing a role writing jokes for Nickelodeon’s sketch series, All That. Rather than go to college, Feldman moved to Orlando, Florida to work on the TV series. “I wanted to go to college, but I couldn’t pass up the opportunity to get my career started. I wasn’t thinking I was going to become a writer – it sort of found me.”

Feldman didn’t feel like she learned a great deal from working on the show. “I didn’t have a positive experience, especially in the TV writers’ room. I was the only female writer. I was very young. There was definitely an element of misogyny and sexual harassment that I had to deal with at a very young age.” 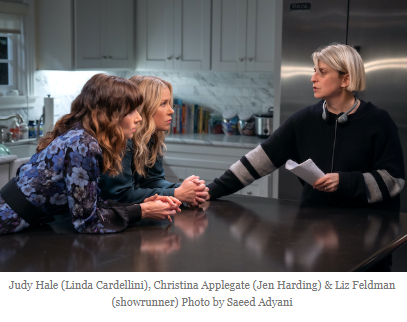 In many ways, this experience caused Feldman to rethink a writing career. She stepped away from screenwriting for a period of time, but after college, when she moved to Los Angeles, she got involved with Groundlings and Second City, where she found her community and voice.

“Through what felt like tenacity, I was able to get a manager, Christie Smith. We started working together when I was 24 and she was 25, and we still work together today. She’s also the executive producer of Dead to Me. We came up in this business together. She’s been my constant and my guide.”

In addition to creating Dead to Me for Netflix, Feldman also has credits for writing on The Ellen DeGeneres Show, The Oscars, One Big Happy, and 2 Broke Girls.

“I was very lucky to get to write for Ellen DeGeneres, who had been an idol of mine,” said Feldman, “and still is. I was at a crossroads at what I wanted to do and what kind of writer I wanted to be and what my voice was, and I was lucky because we had a simpatico thing about us – or at least that’s what I like to think.”

Feldman said her former boss was very generous, often taking her under her wing. “She pushed me to become a better joke writer and not to settle for something that’s fine when you could mine the material for something that’s great. Many of my building blocks, or my ethos as a writer, as a boss, as a showrunner, comes from the work ethic while working with her.”

Working on a daily talk show (which Feldman describes as “a totally different beast”), there’s very little time to put towards work. So, rather than doubling down on time, Ellen’s team would present versions of jokes at 11 am, get feedback from Ellen, then revise, revise, revise. 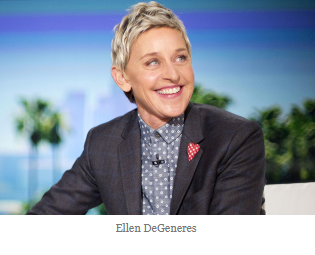 “She would mark it up, give her notes, then – with me – she would say, ‘Oh you can beat that.’ And, oftentimes, if not every time, I literally would have to sprint back to my office to get behind my computer and quickly think how I could beat the joke. It was certainly a real pressure cooker.”

Back at her desk, she would think of other ideas that might fit in or around the subject matter, then quickly explore those different directions. “I was maybe well suited for it because I come from an improv background, of having to think on my feet. That probably put me in a decent position to do that joke, but it’s really about pushing yourself to dig deeper into your own perspective on whatever subject matter you’re writing about.”

“The difference between a great writer or decent writer is that they’re never satisfied. They continually work at it and etch away at the joke, at the dialogue, at the monologue, to see what’s the best possible version. Ellen is a perfectionist and so am I, and I think if anything, she’s given me permission to be like that.”

Among the many, many jokes Feldman has written over the years, there are certainly more that have fallen short compared to those that are home runs, as any writing career. Learning to deal with rejection and not take things personally is what can make or break early careers.

“I think you have to accept that rejection is going to be a part of your career – a huge part – the majority of it. I know a lot of talented people who realize pretty quickly that they didn’t have the skin to take that rejection. I don’t think everybody does, to constantly put yourself up to someone else’s judgment. It’s a really vulnerable thing to keep doing.”

She added, “As a writer in the business, you have to be comfortable being vulnerable. It’s almost a cliche – it is a cliché – that I’ve heard ‘No’ more than ‘Yes.’ Everybody goes through this. The people who I admire the most, the creators, the writers, the actors at the top of their game, they’ve all had their misses. It happens to everyone.” 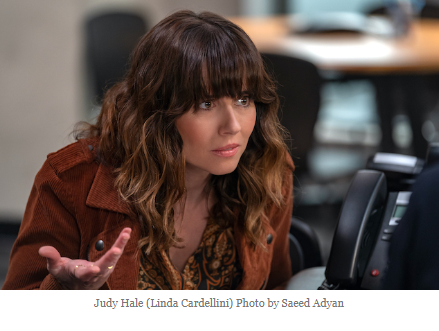 The screenwriter mentioned a book called The Four Agreements by Don Miguel Ruiz, in which she thinks about from time to time. “One of the four agreements is: don’t take anything personally. It’s hard to do that because rejection feels personal, but it never is. It’s always about the situation, the broader politics, and it has nothing to do with your ability and your talent. That’s how I try to handle it.”

Feldman has written for the Oscars on multiple occasions. In her assessment, among two-hundred jokes, three might make it on the show, but those are jokes worth celebrating. “A little goes a long way. It can really buoy you,” she said.

Now, in a position as showrunner and creator, Feldman thinks back on her journey and will try to pass along praise as often as possible. “If someone is doing good work, I need to tell them because I know what it will mean to them because I know what it meant to me. Knowing that Ellen thought I was doing a good enough job on her talk show to write for the Oscars was a huge boost of confidence.”

When Feldman originally pitched the idea for Dead to Me, she came in with the full story outlined. “It’s a good exercise, to try to visualize your show far into the future. You need to find the legs of your show before you’re asked to,” she said. “I wanted to tell a story that’s a little more complicated than comedies are allowed to be.”

“If you are hoping that this show will be a multi-season show, it’s useful to think of what those seasons can be ahead of time. It helps shape your vision. I don’t even know how Dead to Me came to me, but when I got the concept in my mind, the rest of that first season fell into place, but it had to – I was pitching it and I had to say something.”

This also helped her come up with the ins and outs of the characters. “Which characters are essential? You can come up with characters that look and sound great, but a lot of times you’ll pitch a bunch of characters and then realize you don’t need them or they don’t function or you can’t build stories around them.”

As for her writing team, Feldman looks for people who pop out on the page. “You read the writing first before you meet [the writer]. It takes a lot for the words on the page to three-dimensionalize themselves. It takes a certain caliber of writer to do that, especially in comedy. People in comedy are the worst audience for comedy because we see every joke coming. If I’m reading someone’s script and I laugh-out-loud, I’m most likely going to sit down with that person and want to meet them.” 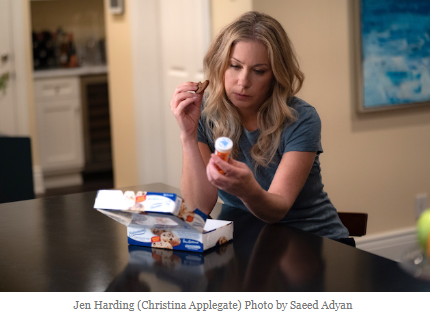 At this initial introduction, the screenwriter is actually looking to see how this potential hire will fit into her writer’s room – which includes her personal dynamic with this new person, the dynamic of the room, and what that particular upcoming season might need that it’s currently missing.

“I really have to feel comfortable with the person. Do I want to be around this person for 10-12 hours a day? That’s just a mixture of personality, so it’s on me as much as it is on them.” She looks for hard workers, sometimes more than talent, and someone “to work incredibly hard even if the show is doing well.”

“I’m drawn to writers who want things good as possible, who keep asking hard questions [but] also kind and enjoyable to be around.”

“We don’t come up with the twist and then figure out how to get there,” said Feldman. “We really start from a place of ‘what are these characters feeling and going through?’ So often, that leads you to where the twist or turn reveals itself. I always want to answer the question, ‘Would the character do this? Is this coming from the authenticity of this character?’ The answer has to be yes.”

“One of the great things about writing streaming television (and this is perhaps controversial for your magazine), but I don’t think about A story, B story, C story. I don’t think about structure in the traditional way, but I had to adhere to such a specific formula for network television – it’s in my bones – but the draw of making a show for Netflix is the de-structural freedom. We think about unifying elements, what that means for the characters, what does that mean for them together, and we then approach it like that, the story unfolds itself.”

In this organic writing style, the focus of the piece is always about their relationship. “Sometimes, it’s more Jen-heavy (Christina Applegate). Sometimes, it’s more Judy-heavy (Linda Cardellini), but we allow it to be organic in that way. The North Star is the friendship between Jen and Judy. Ultimately, I think it’s one of the reasons people have taken to the show, based on the aspirational nature of this friendship. So, every episode should have some reflection of that.”

As for a final bit of advice, Feldman has finally let some advice she heard at an early age sink in. “When I was twenty years old, I saw Ellen speak at a panel. Her show had just been canceled, so it was around 1998. She was asked for advice, and said ‘Don’t try to be the next so-and-so, try to be the next you.’”

“That was profound because I wanted to be the next Ellen. I took those words to heart. I did get to meet her. I did say to her, ‘You’re Carol Burnett and I’m Vicki Lawrence and you don’t know that yet. But, listening to her, I don’t think I followed that advice for years, but when I allowed myself to tell a story like Dead to Me, which comes from a really personal, vulnerable place, (including subject matter I’d rather not talk about) when I force myself to go there, I think my best work has come out.”