“Own What You Write. Stand By Your Taste.”

“Own What You Write. Stand By Your Taste.” Advice From Zach Cox, Manager At Circle Of Confusion:

Zach Cox has been at Circle Of Confusion for over 12 years. He started as an intern in the Fall of 2006 and became a manager by the fall of 2010. Zach has an unquenchable thirst for character-driven stories regardless of genre and believes great storytelling is a gift that can be honed, but not outright taught.  If it were entirely teachable, he would be a screenwriter and not a manager. Zach spoke about what it takes to become a working screenwriter.

There are dozens of management companies representing screenwriters of all stripes. Circle Of Confusion originally became known for big-budget genre films – action, horror, and action, representing big names including the Wachowskis and Simon Kinberg. As they progressed, they expanded into other areas of film and television. We asked Zach what separates Circle Of Confusion from other companies.

“There’s a lot of cross-over, but screenwriters should look for a manager that has the time to invest and really believes in you as an artist,” said Cox. “A good manager would not circulate your work around town with one hundred percent certainty that you’re a good writer.”

“It is contagious. If you pitch a screenwriter that you really believe in, other industry people tend to fall in line. The positive energy is infectious. Your job is to make the industry think it’s getting something special such as a particular voice or a potential movie to be made,” added Cox.

It’s vital that screenwriters align creatively and professionally with their managers. Screenwriting talent isn’t the only parameter that managers will sign you on, although “the cream will always rise to the top,” according to Zach. It’s not good enough for a screenwriter to sign with a manager as it is to sign with the right manager for them.

Circle Of Confusion holds themselves accountable to a level of taste, making Zach Cox very picky with the types of screenwriters he signs.

Many emerging screenwriters wonder when is the best time in their careers to look for a manager. Does it boil down to writing a certain number of screenplays or a timeline? Cox doesn’t fully subscribe to either of these goalposts. “If you believe you’re ready, you are, as long as you’ve put in the hours. When a writer believes ‘this is the culmination of everything I’ve been working on’,” it’s time to approach managers.

Circle Of Confusion receives hundreds of requests daily from screenwriters seeking representation. We asked Zach what attracts him to a potential client. “For me, it always starts with the voice. Is there a specific point of view in the material?” he said. Like all managers, Cox has a heavy reading list, so he immediately recognizes when something stands out. Having the thought of “we have to make this tomorrow” or “we can’t make this but I enjoyed the read,” piques Zach’s interest. Writers should remember that managers are accountable to their clients first, and to potential clients second. 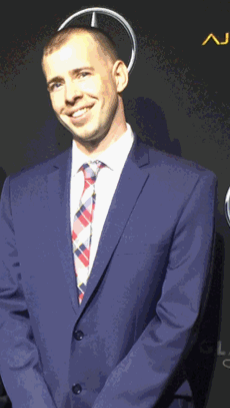 Managers must balance a unique writing voice with the sellability of a project. Ideally, these qualities should be present in the same writer. Screenwriters should understand the difference between a passion project that demonstrates their writing skill and a commercially viable one.

“The wild concept or the wild execution allows me to take chances. I read and watch around fifteen hundred things in a year. I think if you’re looking for your first break, newer scriptwriters should focus on something a little more out there, to stand out and get in the game,” the manager advised.

There are a variety of ways for screenwriters to attract the attention of Circle Of Confusion. The majority of Zach’s new clients are industry recommendations. This is typical for most agents and managers. Circle Of Confusion is also one of the few companies that accepts queries from unrepresented screenwriters. He also considers contest winners (especially Creative Screenwriting Unique Voices Screenplay Contest) and other screenwriting organizations for referrals.

Zach will read the first 10 – 15 pages of every submission in order to make a decision. “I should be engrossed in the story and visualize it in order to keep reading.”

The proportion of screenplays that excite Cox is 5 – 10% The hard passes are around 15-20%. The overwhelming majority are in the middle – that is adequate, but without a defining spark.

The overall quality of screenplays that Zach reads hasn’t necessarily improved or declined over time. “There is a greater number of writers who can write a well-structured screenplay. You can learn that stuff from a book. Nobody’s ever bought a screenplay because it’s well-structured. There needs to be something special there. Few people have those natural gifts.”

“Some writers can tweak dialogue so it sounds real, but fresh and interesting at the same time, and through it, create very interesting scenes and moments without being expository.”

Working on your screenwriting craft goes without saying. Since writing is an art, deciding what screenplays are good is very subjective. It’s also important that newer screenwriters are willing to play the game – politics, personality and ego. Screenwriters also need a degree of malleability with their projects, but not to the point where their visions aren’t realized.

Personality is a key factor in becoming a successful screenwriter. “Sometimes people liking you ends up in a screenwriting career.”

Cox also suggests, “let the industry subsidize your dreams. Do something that’s a little more commercial at first to get in the game. Once you start to deliver, your name will organically start to carry weight. At that point, you can work on your dream projects can become more of a reality because you’ve gained trust.”

Once you’re signed by Circle Of Confusion, it’s vital to nurture your business relationships. It doesn’t matter how frequently you touch base so long as the lines of communication are always open. “The most important thing is that at any given moment, you’re on the same page, meaning you’re working on the same goals. If you’re a screenwriter, the only thing you have is your time. So spend it wisely.”

Make a conscious decision with your manager whether you’re writing a spec script for a producer or yourself. Make sure you both agree on what you want to write next. If you’re not writing anything, relationships can sour. “Sometimes screenwriters need to recharge their creative energies, but other time they struggle to come up with new ideas.”

It’ still the Golden Age of TV. Think beyond a career goal of wanting to get staffed on a TV show.

There are over 500 TV shows currently on air. Not all of those shows require staff writers, Not all of the shows will be a good fit for you. Some of those shows are written by the creator. “Don’t be too focussed on getting staffed. Diversify your portfolio a little bit. It may be time to shoot your short or write that feature spec to get noticed.”

And don’t worry too much about your age. If you’ve been writing over the years and perfected your craft while pursuing another career, you still have stories to tell. “It’s on the page. If it’s quality writing, I don’t care how old you are. I’ve seen a teenager sell a script as well as someone in their 80s,” exclaimed Cox.

Many emerging writers believe that managers read everything that comes their way and they will get hired because their work is better than everybody else’s. This is not entirely true. “Don’t try to break a wall or write a great, derivative genre film to break in. You need to tell a story that’s never been told before.”

Writers’ block can be offset by Zach offering some IP, screenwriters can work on until they can generate new ideas. If a writer is on assignment with strict deadlines, writers’ block isn’t a luxury they can afford. Cox will sometimes ask writers in that situation to forward him an unfinished draft for feedback. “At that point, you have specificity in how to make it better.”

If there’s no deadline, Cox suggests writers come up with 5 ideas a day. “It could be a character or a simple idea like a motorcycle gang. It doesn’t have to be a fleshed-out pitch or logline. Do this for a week or two.” Hopefully, this should spur a writer’s creativity.

Following, or predicting, industry trends can be both a blessing and a curse. Clearly, screenwriters should be aware of the material that’s out there. Cox considers where an original idea might fit in rather an advising screenwriters what to write next. He also looks at the format. “If it’s a big, epic world with a a large scope and there’s an over arching plot or character arc, it’s probably a TV series. If it’s small it could be a web series. If it’s a big character or a clean logline, it’s probably more of a movie.”

There are still more buyers in TV than in film. “Because the pendulum has swung so hard towards TV, everyone has acknowledged there is a bubble that will eventually burst. There will always be room for movies. Not as many at the studio level, but more than ever in the indie film and smaller studio space.”

There are very few barriers to making a film now. You can film and edit a movie on your phone. “Movies will always be made. Only the way in which we view movies has changed.”

There is no algorithm that guarantees screenwriting success. Zach Cox gave his final pieces of advice.

“Own what you do. Stand by your taste. Write whatever you believe is good and people will eventually catch up.”

Develop your core brand. “You can still write that quirky thriller or comedy in your downtime, but keep writing what you’re known for. Keep writing what’s going to make you a living. But you’re a writer so you can always write your way of being pigeon-holed. You control that.“