Profile Of The Most Important Stanley Kubrick Films

Fearless. Brilliant. Innovative. Perfect. Genius. Five words to describe legendary director Stanley Kubrick, which do not begin to describe his impact on movies and culture.

He made sixteen films in his four-decade career — thirteen features and three documentaries — joining the ranks as one of the world’s greatest directors. Regularly making the top slot in “Best Directors of All Time” lists, Alfred Hitchcock, Martin Scorsese, and Orson Welles often come second, third and fourth. His thirteen features — Fear and Desire, Killer’s Kiss, Lolita, Spartacus, The Killing, Paths of Glory, Dr. Strangelove or: How I Learned to Stop Worrying and Love the Bomb, Full Medal Jacket, A Clockwork Orange, Barry Lyndon, The Shining, 2001: A Space Odyssey and Eyes Wide Shut — have all been considered masterpieces in one way or another.

Let’s look at three Kubrick films that have left cinematic marks on the world:

After finishing up Dr. Strangelove, a brilliantly unique black comedy about the Cold War, Kubrick unveiled “the proverbial good science fiction movie.” That vision ultimately became 2001: A Space Odyssey, but the journey started four years before its 1968 release. MGM, initially reluctant to finance a science fiction film, was eventually convinced by Kubrick to use a Super Panavision 70 camera with the ultra-widescreen Cinemera format. This combination — filmed with an anamorphic lens and a wide aspect ratio, seen in theaters with three synchronized 35mm projectors beaming onto an enormous, curved screen with a 146-degree arc — would be the supreme filmmaking technique to capture the sprawling, infinite blackness of outer space. 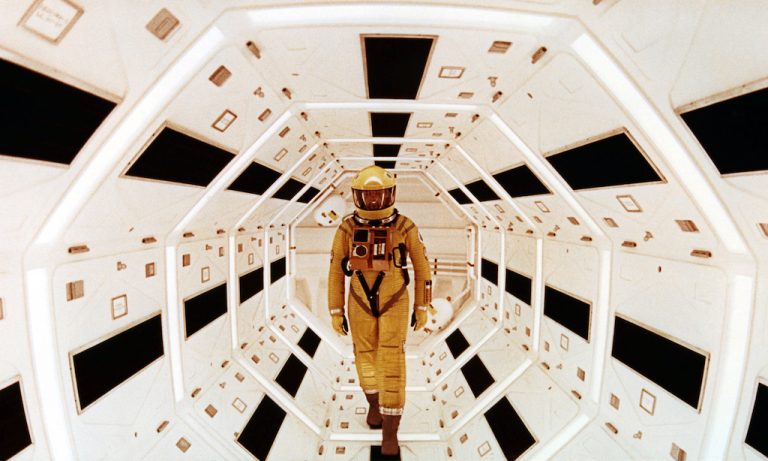 “Kubrick was known for his meticulousness and for his attention to detail,” said art director and production designer Juliana Guedes (The Pill, Lupita, Meathook.) “He had such a clear vision of 2001: A Space Odyssey that he hired three production designers to create the world where the story unfolds. Because the film was made during the race to the moon, Kubrick wanted to make sure that the design set contained [the rare mineral] atheneite. To achieve this authenticity, he brought together a team of specialists in the astronomical, aeronautics, and aerospace fields to design all the details in the interior of the spacecraft, making sure switch panels, communication devices, and display systems were as accurate as possible and wouldn’t look outdated. He wanted in some way to “predict the future.’”

Detail, accuracy, and composition have always been Kubrick’s priorities in craftmanship. The 2001 screenplay, written by Kubrick and Arthur C. Clarke (inspired by The Sentinel, Clarke’s short story) took bits and pieces from the original work and expanded its horizons. Clarke built off the screenplay and novelized that story, which he published along with the film. Wanting to avoid the “typical space movie,” Kubrick’s focus on imagery with minimal dialogue and a soundtrack of classical music was the trademark of 2001.

Guedes continued, “One of his production designers, Harry Lange, had worked for NASA and spent two and a half years designing this masterpiece and his designs required security clearance by the agency. Kubrick also reached out to many corporations and furniture manufacturers and created a big product placement tie with these companies’ submitting concepts of how their products would look decades later. Kubrick did a lot of studying and researching himself, looking at the design of the 60s sci-fi films, but his starting point with the design of 2001 was a living room that changed colors in The Hall of Science at the 1964 New York’s Fair.”

Although not fully appreciated at the time, another masterpiece Kubrick conceived three years after 2001 in 1971. A violent, brutal, bizarre, unhinged visual mindscape opened even the most innovative minds into another world of creativity, transcending cinema thereafter.

“A Clockwork Orange created a new language of violence and social commentary that transcended popular art,” reflected Inspired Minds podcast host Jeff Watson. “Based on Anthony Burgess’s 1962 novel of the same name, the hyper-stylized film was a revolutionary step for Kubrick with his unflinching look at ‘ultraviolence’ and destruction. Soon after its release, Kubrick himself pulled the release from Britain, and several other countries as well, after it was cited as having inspired copycat acts of violence. Much like Paddy Chayefsky’s prescient Network, A Clockwork Orange foretold a future of sociopathy and malignant narcissism that were unthinkable at the time.”

The dystopian crime film set in a futuristic Britain dealing with a wide array of themes, everything from governmental and corruption to psychology and juvenile delinquency, pierced audiences’ eyes with some of the most intense imagery ever seen on film. Emphasizing the “Ludovico Technique,” a type of aversion therapy where the subject is forced to watch disturbing images through an apparatus while under the influence of a drug called Serum 114, ignited both adoration and outrage. For some, it was pointless and repulsive. For others, however, it was a masterwork of genius.

“Burgess’ source material was written in reaction to the growing field of behavioral psychology,” Watson said. “Specifically, I’m talking about Russian psychologist Pavlov’s work with operant conditioning and his famous salivating dogs. This conditioning raised questions about the nature of free will which birthed the theme of the film. The score by early transgender advocate Wendy Carlos wedded Beethoven to the eerie sounds of the Moog synth to create a feeling of unease and tension. As with all of Kubrick’s films, every shot is intentional, and nothing goes to waste. The movie opens as Kubrick slowly pulls back from Malcolm McDowell’s titled bowler and peacock eye to reveal the white room of the Korova Milk Bar.  At this moment, the audience is aware that they are going to experience a new kind film.”

Two features and sixteen years later, after Barry Lyndon and The Shining, Full Metal Jacket surfaced in 1987. This was a surprising turn for Kubrick, who usually covered a genre once and had already directed Paths of Glory thirty years earlier. Perhaps making an exception to the rule, as Paths of Glory was about World War I and labeled as an “anti-war movie,” Full Metal Jacket explored the Vietnam War in an unusual two-part structure. Some critics claimed cultural insensitivity surrounding Vietnam, while others praised its unusual two-part structure. The stark difference between the first and second half almost presented two separate films. The first half, an intense study of bootcamp with themes of military brainwashing and mental endurance, the second half an explosive war epic.

“I’ve been a Kubrick fan since I was little and saw The Shining,” stated Thuc Doan Nguyen, writer of Scent of the Delta, a feature film to be directed by Adele Pham and starring Tiffany Pham. “I’ve seen that movie a lot. I made myself watch Full Metal Jacket, as part of my study of Vietnam War movies. Of course, that one line in the movie has plagued me my whole life  —  ‘me love you long time.’ I wrote a whole Esquire Magazine article about it and talked to tons of other people and how they experience life with those five words looming around every corner. This influenced passages of my screenplay for Scent of the Delta. Kubrick has influenced my filmmaking studies, as well as provided me something to push back against that has made me create more material.” 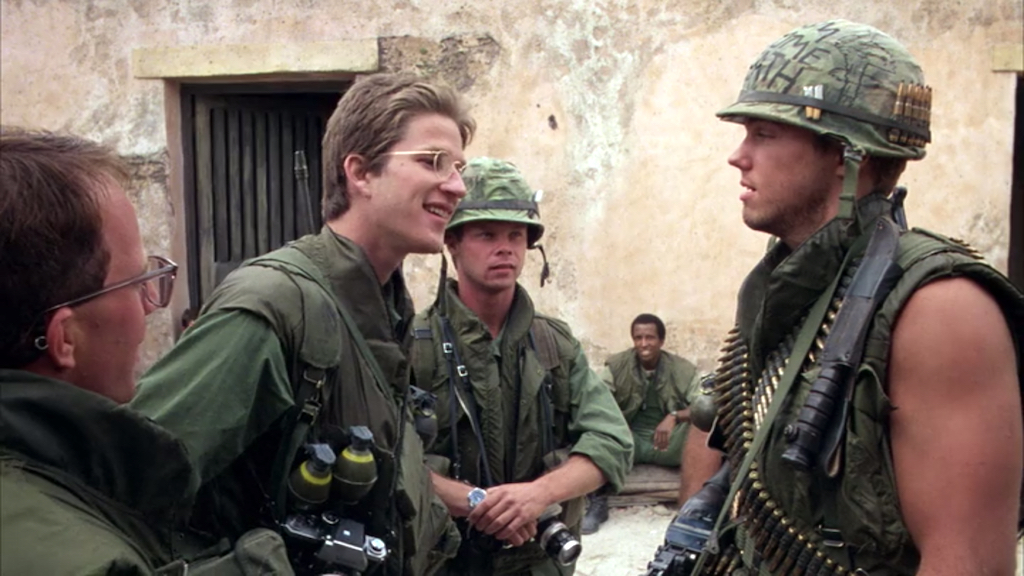 Based on a semi-autobiographical novel called The Short-Timers by U.S. Marine Corps veteran Gustav Hasford, Full Metal Jacket — like 2001 — had a similar foundation in the sense that its source material came from someone well-versed on the topic. It can’t be argued that Full Metal Jacket set the battlefield for future war films like Platoon, Saving Private Ryan and Black Hawk Down. As with all of Kubrick’s work, underscoring the true artist that he was, another thread weaving through every film is the elaborate use of color.

“One of Kubrick’s most impressive and distinct details in all his work is the use of color,” noted Guedes. Red, blue, yellow, orange, green, and black and white are present in almost all his films and are indicative of his vision and attention to art direction, costumes and set design and how visual elements can tell us so much about a story. In 2001, this can be seen on many of the sets when they brilliantly mix the coldness of a black and white set with just a hint of color, whether present on the Olivier Mourgue ‘Djinn’ red chairs at the Hilton Lobby or on Keir Dullea’s red space suit or the blues, greens and light yellows on the spacecraft’s command center or Hal’s yellow and red eye lens. The film’s design excelled in such a way that it became a statement for contemporary design and design innovation.”

“I saw the Kubrick exhibit when it came to LACMA and absorbed how Kubrick used the colors green and red to signify moods and future actions,” said Nguyen. “I noticed his use of easter-eggs too. I also watched Room 237. I was just talking with Scent of the Delta’s director about how we could emulate the opening shots of The Shining in our film — with our lead driving in a car, about to begin a journey. I think many filmmakers have adopted this opening. Kubrick’s color palettes will also affect the look and feel of Scent of the Delta, for sure. I’m definitely a Kubrick fan in regard to his deliberate use of film coloring, delay and suspense.”

“There are many favorite movies that I have of his, but all for different reasons,” stated director Marcus Nispel, The Texas Chainsaw Massacre (2003), Frankenstein (2004), Pathfinder, Friday the 13th (2009), Conan the Barbarian and Exeter. “Look at 2001. Nobody knew what space would sound like, what it would feel like. It doesn’t sound like anything. 2001 informed how all space movies should be. It informed the pattern that all other space movies followed and it’s such an important film. I can tell you what makes Kubrick outstanding is that, in every genre, there is only one percent of films that are really, really great. I think it’s true for most businesses. He has always managed to be in the top one percent of whatever the genre was — horror, science-fiction, war — you name it. He nails it, even in a dystopian future.”