We caught up with the busy Aaron Mendelsohn to discuss the importance of asking questions about your characters, common mistakes new screenwriters make, and the most important question you can ask about your story. Recognizing that his technique could benefit other writers, including his students, Mendelsohn started teaching his 11 Questions method as a master class. The response? So positive he decided to turn it into a book: The 11 Fundamental Questions: A Guide to a Better Screenplay.

Of your 11 questions that you pose, which do you think is the most important that a writer needs to hit, especially in the first stages of an outline and/or draft?

They’re all pretty important, but Question #3 – “What is the Central Idea?” – stands out a bit from the others, in part because it’s not as obvious.

Billy Ray, with whom I serve on the Writers Guild of America West Board of Directors, gave me the idea for this question. He felt it was important that every story have a Central Idea, which is essentially a theme or notion that is tested in every scene.

For instance, the Central Idea for The Matrix is: “Neo can only be the One when he believes he’s the One.” For Selma: Martin Luther King knows Selma is the key to the Civil Rights Movement.

The Central Idea is sort of like a thesis you’re testing out, that binds your story together into a cohesive whole. I find it invaluable.

Some screenplay books focus on structure, while others focus on building a character. In your book, you not only include questions about structure, but also about the main character. Was that purposeful?

Absolutely. I used to be a very concept-driven writer, and as a result my characters would often get the short shrift. Answering questions about my characters has forced me to really think about the people who live in my story and imbue them with complexity and dimensionality. The result has been a dramatic improvement in my character building.

Your book, though detailed, is also a quick read. Was that the objective?

Yes. I really wanted the book to be something you could quickly glance at as you started your story-breaking (it’s great for the rewriting process too). A method that could be easily digested and memorized and recalled – and wouldn’t kill too many trees if it was printed out.

Is there an example from your own writing life where these questions — or at least one of them — has saved a script of yours?

They’ve saved a bunch, actually. I’ve found that when I employ the question-asking technique, I generate a stronger first draft and receive fewer notes from executives. The method has also greatly improved my pitch writing. I credit the 11 Questions for helping me craft the drama series pitch I sold to Spike recently. In particular the Fatal Flaw question helped me nail down the arc of my central character over the course of the show.

You teach writing. So what are some common mistakes that screenwriters make? What would you like to see more of in screenplays? 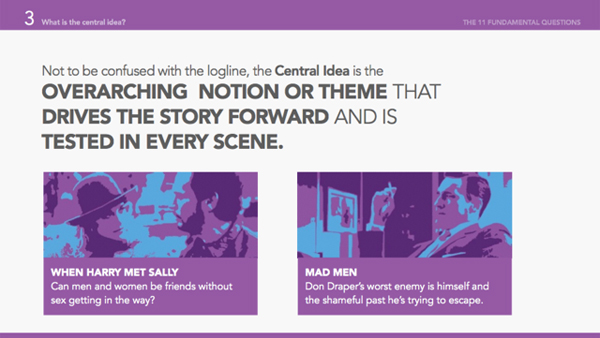 Newer writers tend to be very concept-driven and, as such, don’t focus enough on their characters – exactly how I used to be! Subsequently the voice of their characters tends to shift, and their goals are often unclear.

I also encourage my students, during the outlining phase, to come up with supporting and antagonistic characters who will enable and challenge their central characters. I find that newer writers tend to under-populate their scripts.

I also find that newer writers often eschew the outlining process in order to “get to the fun part” and jump into their scripts. This usually leads to problems down the road, particularly in the Second Act.

The 11 Questions method can help head off a lot of those problems – but only if the writer answers each question truthfully and substantively.

In your book, you mention a lot of great movies and TV shows. What are some screenplays that you would recommend to writers for them to read?

I’m always talking up classic screenplays like The Godfather, Citizen Kane and Casablanca (great supporting characters in all three, by the way), but I’ll often add in a few of my personal favorites like Quiz Show, The American President, The King’s Speech, and Ex Machina. Also any screenplay written by Shane Black. His scripts are such a pleasure to read.

Which TV and movies are a must-see/must-watch for screenwriters?

I think Good Will Hunting is a great movie to watch because it shows how vibrant, naturalistic dialogue can really come alive onscreen. And the pilot for Breaking Bad is a master class in rising tension, emotional highs and lows, and all around superior storytelling.

What are you working on now?

I’m just coming off of the animated feature Princes for Warner Bros. and the drama pilot Bad Medicine for Spike. Next up is a romantic comedy for Hallmark called Like Cats and Dogs.

And no, the dog will not play basketball.

One would assume that having a slew of writing credits film, TV and new media projects, as well as being a professor of Screenwriting at Loyola Marymount University in Los Angeles, would mean that Mendelsohn would have the breaking story process down to a science. However, you know what they say about assuming…

“I’ve always struggled with the story breaking process,” says Mendelsohn. “I’ve never been one of those guys who can just see the whole story in my head. I found, over the years, by asking myself a series of story-related prompts, like ‘What’s the call to action?’, ‘What’s my central character’s fatal flaw?’, that I was able to stimulate ideas and construct stories that were far better than when I would just whip something out or jump right into the script.”

Eventually this process coalesced into Mendelsohn coming up with eleven specific questions that he would roll out every time he broke a new story or pitch. “Sort of like an eleven point stress test,” he says. “This method helped my story breaking immeasurably, and I saw a noticeable uptick in sales.”

Mendelsohn found that his method was equally effective at breaking story for pilots and series pitches, as well as books and plays.

The response to the book has been equally positive, with acclaimed writers/producers like Chris Brancato (Narcos) singing its praises. “Asking questions of your own material is the key to successful rewriting. Aaron encourages us to not only consider his fundamental questions, but to ask others as well, the end result being a better script.”