My sister is an actor. For decades she was best known for her femme fatal role in the first movie ever directed by Clint Eastwood: Play Misty for Me. That led to thirty years of bad girls: Women in Cages, Women in Chains, and u-name-it. In recent years however, thanks to her role as Lucille Bluth in the incomparably biting and hilarious Arrested Development, she has been able to show off what we in the family have already known she had: powerful comedy chops.

She got her start in a ‘60s CBS soap opera, Love of Life. She told me that during her two years on that show she must have poured ten thousand gallons of martinis, as lazy writers so frequently give actors fake action that is not action at all, such as mixing drinks, eating food, driving around in cars, chatting in offices. These are merely excuses for the actors not to act out the story but instead to narrate it via dialogue.

They’re not called talkers, they’re call actors. The word ‘drama’ comes from the ancient Greek word meaning ‘to do.’ When the director is ready to shoot she says “Lights, camera, talk?”

I don’t think so.

The last word is “Action!” 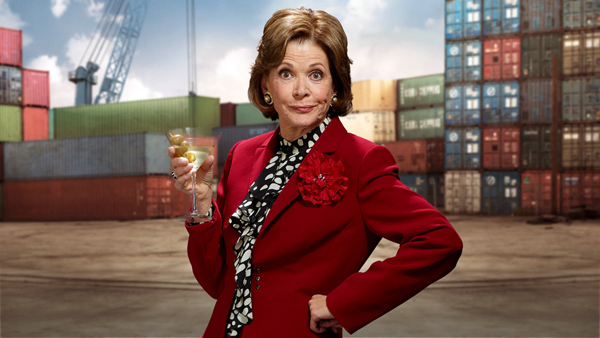 Several years ago I read the script for the George Clooney movie The American. Beyond the scattered smooching and shooting, it’s mainly actors sitting around in bars, restaurants, cafes, and driving around in cars, talking, talking, and talking.

Merely by avoiding lame, limp venues, writers can imbue their scenes with vitality and allure. If you have a scene set in a coffee shop or some similarly lackluster setting, contemplate simply changing the location. It may very well lead not merely to background that is more engaging but also to significant expansion of character.

I collaborated on a police/action/melodrama/thriller years ago that dealt with a cop who happened to become also a best selling author. He is in conflict with his superior officer. As I explain in my book Essentials of Screenwriting, the script suffered from too, too many scenes in the latter’s office. There was too much time spent with two guys sitting on opposite sides of a desk arguing with each other.

My writing partner and I made up a list of alternative locations where one or another or several of the scenes could play out other than that office. One of these was a swimming pool. Is that genius out of Shakespeare? Of course not. All by itself it’s no big deal, but in a screenplay nothing is all by itself; everything is part of the whole picture. 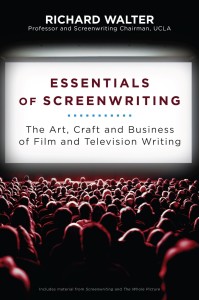 The notion of a swimming pool suggested to us that the older officer was overweight and had a heart condition; he’d been ordered by his doctors to exercise. He had taken, therefore, to swimming daily, and it is at the pool that the cop/author catches up with him. It’s much more interesting for the two of them to be conversing as one of them swims and the other walks up and back alongside, shouting his end of the conversation. Additionally, due to his success as a writer, he’s wearing six hundred dollar Magli loafers, and is constantly drying them against the leg of his pants as he moves along, fearful that the splashing chlorinated pool water will spot the shoes.

Actors love having these kinds of physical quirks assigned to them.

The key issue between the men is that the superior officer is unhappy with his adversary’s newfound wealth and the independence it offers him. It’s hard to rein him in and keep him under control as a cop. He wants the writer to retire from the force. The writer, on the other hand, maintains that, despite his success as a writer, he is still just a regular cop, and he wants desperately to remain a cop, as that life offers, among other rewards, the source for his novels.

One can see that simply changing the setting led to substantial enhancement of tale and character issues.

A script written in a UCLA screenwriting class involved a couple who work in the same office. Over the course of the tale they meet, court, and marry.

It opened in the office at the water cooler. The couple meet, sip water, and schmooze. Is that exciting? Is it dramatic? Isn’t it two actors merely reciting dialogue?  Is this a radio show or a movie? 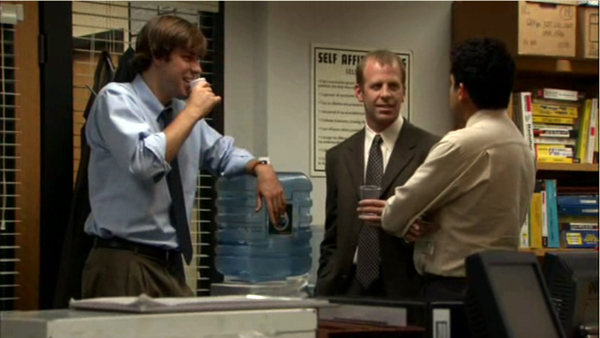 I suggested the writer move the scene to another venue. She chose the underground parking garage. Is that astonishingly creative? Certainly not. But from this simple modification it led to a bounty of creativity.

The woman in the scene is dressed to the nines, elegantly coiffed, sporting a dazzling manicure. She approaches her car, as she’s about to drive off to represent the firm at an important meeting. She discovers there’s a flat tire. She hasn’t got time to wait for the Auto Club, and so she begins to change the tire herself.

At this point the male love interest happens along. He stops and offers to help.

“You don’t think a woman is capable of changing a tire?” she asks him.

“This is what the women’s movement has come to?” he responds. “You won’t let a man help you change a tire? You’re about to go off to represent our company at an important meeting. But in a moment your outfit’s going to be smudged and you’re going to break a nail or two.”

All the while this exchange takes place, they are wrestling together with the tire, struggling with the wrench and the lug nuts.

This is not exactly the auto chase in Bullet, but it is action. Isn’t it a superior way for the couple to meet and engage one another? Isn’t it a whole lot better than yakking around the water cooler?

I recommend, therefore, that writers train themselves to hear a little bell or buzzer sound in their head every time they think ‘coffee shop,’ ‘office,’ or ‘car.’ A simple change of venue can engender substantial improvement in a screenplay’s most fundamental aspects.