Pixar Animation Studios have built a reputation for telling compelling, engaging, family-friendly stories since 1979. They have combined their highly-successful storytelling with equally innovative animation. Soul is co-written by Pete Docter, Mike Jones, and Kemp Powers. Docter and Powers served as co-directors. Jones began his career as a journalist. He was the former Managing Editor of Filmmaker Magazine and later became the Executive Editor of IndieWIRE. He currently serves as Senior Story and Creative Artist at Pixar and has worked on Toy Story 4, Incredibles 2, and Coco. He later joined Variety and covered film festivals. “I love watching films with strangers. I loved hearing where they were emotional with what they were watching. I loved watching a film take its audience across a whole rainbow of emotions by the benefit of structure.” 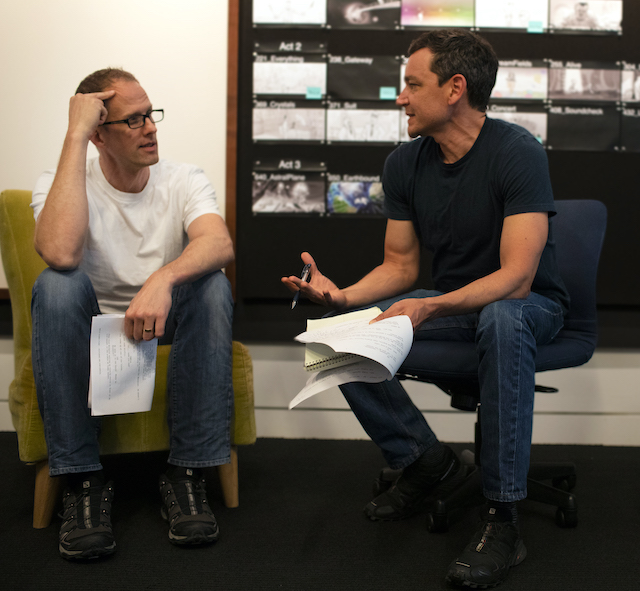 Unlike many film studios that rely heavily (or exclusively) on existing IP, Pixar differs in that its films are entirely original generating a pure story from scratch. “A Pixar film exists because a character creates the entire plot,” began Jones. “They create the story from their own doings, through their flaws and wants.”

Pete Docter’s idea sprouted over twenty years ago when his son was born with what appeared to be, a developed personality and sense of self. He approached Jones with the idea that eventually became Soul.

Docter wanted a film, “beyond time and space and had its own personality.” Soul also utilized contrasting settings to depict gritty New York City and the cosmic planes. It was mainly set in the pre-life, or The Great Before, where new souls are nurtured, trained, and assigned to humans to give them their personality. Docter and Jones were cognizant of the fact that this fantastical setting alone could not drive the story engine.

Jones, “gave Pete [Docter] a framework of characters that could generate conflict and drive the story,” he continued. “The characters in the Pixar universe typically start in a world they believe is fine, but something happens that changes it irrevocably. Their desire to get their old world back changes their world.”

The filmmakers at Pixar always begin with a story that speaks to them personally.”When we pitch our ideas to directors, we ask them where do you fit inside of that in terms of their history or upbringing.”

A personal hook always allows writers and directors to develop a gut instinct for the story, because, “They have to live in that story for over four years.” Jones admits that most of Pixar’s movies aren’t created for kids. They are created mostly for themselves.

The complex worlds of Soul require deliberate exposition to establish the parameters for the audience. The audience doesn’t need to be burdened by too many rules of each world. Jones was more focused on the story and creating obstacles for our main character, Joe Gardner (Jamie Foxx) who had to navigate which obstacles he could and couldn’t overcome in the Great Before. It was about establishing Joe’s emotional arc.

“We needed Joe to re-evaluate the importance of a fulfilled life and pursue it. Our goal was to find the best place he could do it and this is what we came up with. All the baby souls are running around trying to figure out what their personality traits are. They were essentially kindergarteners playing and trying to figure out who they were and what they liked. We didn’t want too many limitations other than some teachers and counselors, who were all called ‘Gary’. The Great Before was an open world that Joe is confused by.” That is until he meets 22 (Tina Fey), a precocious soul who was in search of the spark that gives life meaning and purpose.

On the other end of the spectrum was the astral plane of The Lost Souls. These were unfulfilled old souls who had lived life and become trapped in their own regrets. They wander aimlessly until they are reunited with their old bodies to hopefully find their spark.

“We needed Joe to visit both of these worlds,” said Jones. The plane to the world was provided by a jaded 22 via a sink. This is where he convinces 22 that life has purpose and meaning. She has spent centuries at the You Seminars and Personality Pavilions where new souls collect their new personalities a la carte as steps that she is ready to go to Earth (The Great Beyond) and find a human. She is driven by fear and frustration as she watched the other souls depart for Earth while she was left behind sans her spark.

These worlds might boggle the average viewer as they kept track of the rules and parameters of each world. The Soul team didn’t want to get bogged down by the rules but rather sought entertaining ways to get around them and move Joe between the worlds. “We try to subvert the logic of the story worlds with entertainment and humor. This happens in many Pixar movies,” added Jones. Of equal importance, they also needed to construct an alternate real-life world in New York City where Joe Gardner plays jazz piano – his true passion.

The writing process of Soul was a conveyer belt operation of screenplay pages shuffled to story artists to draw them, five or six pages per artist.” The artists figure out where they can cut dialogue in favor of action. Excessive talking in animated characters is boring to watch.” Dialogue is preferentially cut out in favor of an eye moment or a gesture.

Despite being a family film, Soul touches on a range of existential themes ranging from the inspirational, aspirational, spiritual, and philosophical. Joe is at a crossroads in his life. He’s a middle-school band teacher who’s offered a permanent job with benefits just when he’s offered a chance to play with Dorothea Williams (Angela Bassett). The safe option will ensure a spiritual death for Joe.

Fulfillment is attainable even if somewhat unrealistic at times. “Joe comes to understand the meaning of his life through his art by pulling out all the stops and removing distractions.”

Surrounding the central theme of fulfillment, Soul also mines the notion of passion, purpose, spark, and inspiration to set you on your path to what you will do on Earth and get you excited. 22’s spark was to eat pizza for a fleeting moment. Joe’s was to play jazz piano.

22 eventually went to Earth with Joe to experience his life. She didn’t try to change him, but rather help him find the spark that instigated him to go on the audition with Dorothea Williams.

Life isn’t about the success or failure of his ambition to play the piano. “Life is about building smaller moments which give it depth and meaning.”

This is illustrated at the end of the film when Joe finally lands his dream audition with Dorothea Williams. He’s excited about it, but realizes that he’s not as excited as he thought he might be. It’s about the steps in the journey to get there. “Pete and I were talking about this notion very early on in the movie.” A fulfilling life is a series of stepping stones rather than a destination. 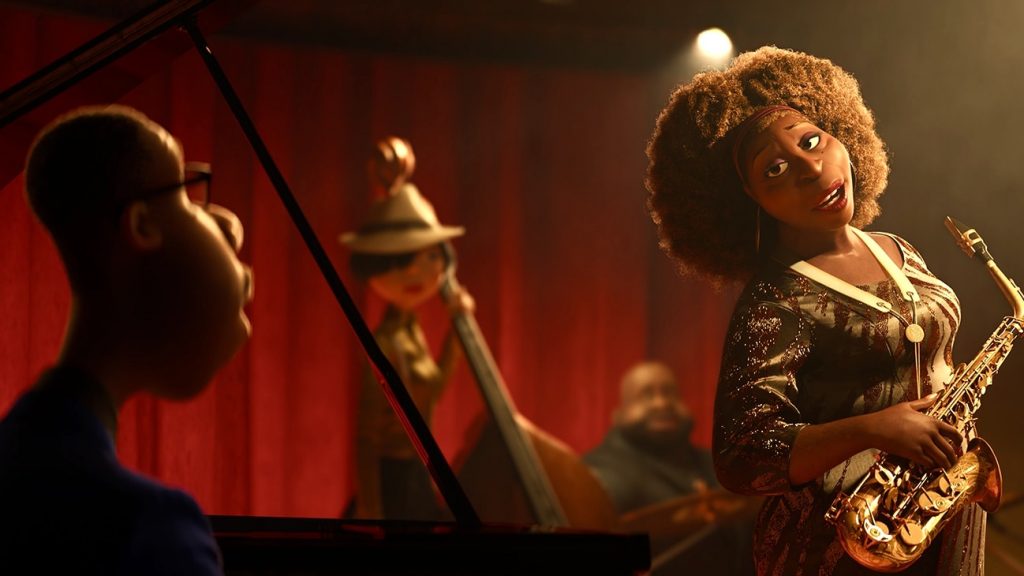 These themes of biblical proportions cannot easily be distilled into a two-hour movie. Furthermore, younger audiences might not easily grasp them. They just want to laugh and have fun. Jones and Docter carefully modulated the tone of Soul to appeal to the childish sense of wonder and to a thinking adult. If the plot point became too heavy they offered some levity to diffuse the tension. “Pete Docter is a student of animation who grew up with Bugs Bunny and Mickey Mouse. He’s a wonderful goofball who isn’t simply going to make an earnest movie about the meaning of life.” That is why Pixar hires comedy and drama writers rather than slapstick cartoon writers. Jones entered the Pixar-verse as a drama writer.

Pixar can make a movie that’s realistic and very funny. Jones admits, “What’s really hard to do is to add emotional dramatic weight to it. That’s what Pixar looks for in writers.” The beauty of Pixar’s films is that they are not only family-friendly, but they can also resonate with the same audience for decades. “I would love a kid who may not be aware of the lofty philosophical concepts to watch Soul and have fun. Then they can rewatch it in their teens or their twenties and suddenly those concepts have an entirely new perspective to them.” That’s why Pixar films have such longevity.

Mike Jones can identify with both the characters of Joe and 22 on a personal level. “I have the cynicism of 22 and the desire of Joe.” He had a particular vision of what screenwriting success looked like earlier in his career. He also had preconceptions of what fulfillment felt like rather than deriving it from writing. “We all have ego, ambition, and desire.“