Liz Tigelaar is a writer/producer with a stellar resume in the TV writing and producing space. Her credits include Casual (2015-2017), Nashville (2013) and Bates Motel (2014). She recently developed Little Fires Everywhere for Hulu, starring, and executive produced by Reese Witherspoon and Kerry Washington and based on Celeste Ng’s best-selling novel. She sat down with Creative Screenwriting Magazine to discuss her creative process.

We asked Tigelaar in the sea of material available to her, what attracted her to Ng’s New York Times best-selling novel. “First of all, it was set in the nineties when I came of age. So I felt very connected to the time period.” There were so many themes in the book that struck a chord with the showrunner to make the show a perfect fit. “I love family dramas, mother-daughter stories, and relationships between women.” She was also adopted, so this storyline was also resonant with her. There are so many unknowns in the lives of adopted children that are taken for granted by others. “There’s a natural searching and longing you have engrained in you.”

In a nutshell, Little Fires Everywhere is about motherhood, and how mothers give everything they can to their children. “I also explore how blind some mothers can be to the damage they cause to their children.” Little Fires richly explores motherhood more expansively than comparing biological mothers to adoptive mothers. “There are mothers you’re born to and the mothers you seek out and find along the way, for better or for worse,” continued the showrunner. 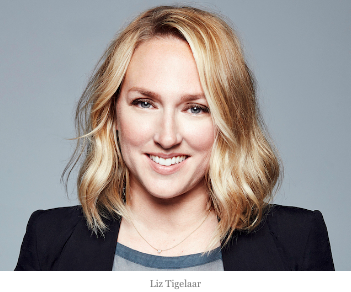 The show doesn’t neatly fit into a single genre. There are dramatic and comedic elements. “It’s a complex family drama with a huge element of mystery and social commentary,” according to Tigelaar.

For those of you have watched the series, the first episode of Little Fires Everywhere opens with a somewhat enigmatic scene. The Richardson house is burning to the ground and Elena Richardson (Reese Witherspoon) is seemingly happy about it. Celeste Ng’s novel opened with a similar fire scene, but in the TV series, “We leaned into the mystery of it even more. We don’t know what’s going on in Elena’s head.”

Smiling at this destruction is certainly a bizarre reaction to something that represents home, motherhood, and prosperity – everything that Elena values is inside the walls of the burning house.

Mythologically, fire represents the destruction of the old which no longer serves us to make way for the new. It’s a catharsis. Tigelaar references Izzy Richardson [Elena’s daughter] (Megan Stott) who also has a perverse fascination with fire. “It can seem like total devastation and destruction, but out of that something grows that’s even better,” added Tigelaar. She continued that these storylines were ironically written during the horrific fires in Malibu.

The Malibu fires threatened the writer’s home at the time and she had to explain the potential loss to her son. She felt it was the loss of innocence and security that home represents.

On another level, Tigelaar asks, “What’s the loss during a big fire?” This forms the bedrock of the TV show.

Transforming a novel into a TV series is fraught with many challenges. But not in this case. “We had initial meetings with Celeste about some ideas I had in how to approach the adaptation. Many of these ideas she came on board with and was really excited about.” This gave Liz the confidence to proceed with the adaptation knowing that her instincts were closely aligned with Celeste Ng’s.

“We loved the story. We thought of it as Celeste writing the song and we did a cover of it. We’re bringing it to a new medium and giving the story a chance to transform and deepen because we have more time. Celeste’s book will always be the beating heart of the TV show.”

Mia Warren’s (Kerry Washington) character was a departure from the novel. In the TV series, Mia was a black woman, while her race wasn’t indicated in the book. You could only assume that in both versions of Mia she was a struggling, working-class, laywoman who drove a crappy car. “Kerry’s version of Mia’s experience added a new thematic dimension to the TV show.” The writers and Kerry were mindful to truthfully depict this relationship – how Mia responds to the town, to rich people and how she raises her daughter. 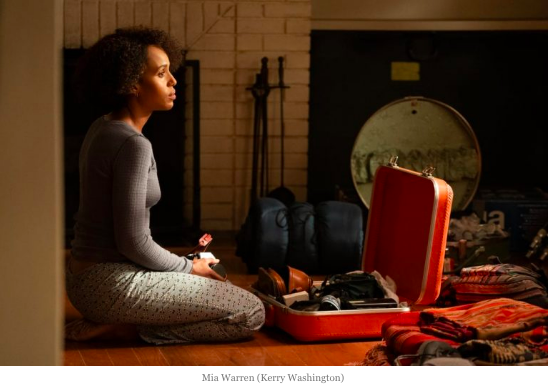 The Bebe Chang (Lu Huang) – Linda McCullough (Rosemarie DeWitt) relationship had to be brought up in the television version of Little Fires Everywhere. “We took our time getting deep into the machinations of this story  to see how this plot was going to unfold.” This gave Bill Richardson (Elena’s husband) (Joshua Jackson), Mia, and their children in the show richer character arcs than in the novel.

Izzy’s sexual orientation was also further explored in the series than in the novel. “Izzy could be gay, or perhaps struggling with her sexual identity at a time when everyone is coming of age, and how stifling that might be with Elena as her mother in a small town which expects children to be an extension of your parents.” The show was already so diverse and intersectional, so embellishing this plotline felt natural.

One key area Liz Tigelaar grappled with was how to make the moments in the book even more interconnected in terms of how one plot point feeds into another. “I think of the photograph of Mia and Pearl (Lexie Underwood) in a museum and how could we take that idea and start a snowball chain reaction that could develop a momentum that could take us to the end of the series,” added the writer.

Tigelaar wasn’t concerned with appropriating art. “You’re putting something new into the world.” This was a key theme in the show. You take something familiar and make it less recognizable,” so the audience enjoys it.

Despite its heightened dramatic flourishes which sometimes straddle the comedic, “We wanted the tone to be truthful. We referenced Killing Eve a lot in the writers’ room,” according to the showrunner. The creators also referenced Friday Night Lights to ensure that the kids’ stories felt grounded and rich.

The prickly, sometimes adversarial relationship between Mia and Elena is the main thrust of Little Fires Everywhere. “We discussed the non-binary nature of the relationships between women. You can have a complicated relationship between Mia and Elena where they are magnets that paradoxically both attract and repel each other.” Mia is holding a mirror up to Elena, and on some level, Elena is doing the same to Mia. Elena lives this ordered life and Mia does not. “When Mia enters her life and shows her another way of doing things, it’s incredibly unsettling to Elena.” We all want to believe that we’ve made the right choices in our lives and don’t like them challenged. 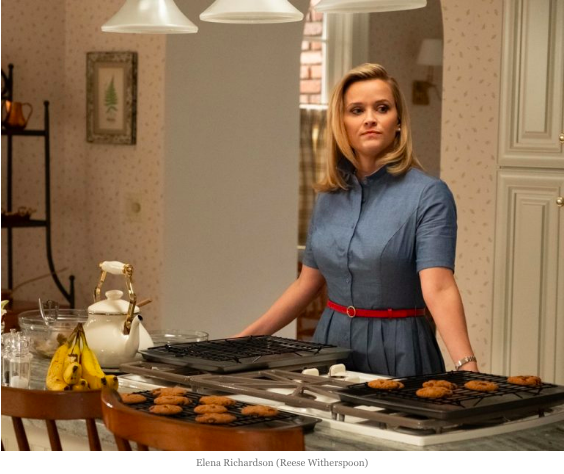 On many levels, Mia doesn’t want to change or even believes she needs to. Despite enjoying her Bohemian lifestyle, Mia believes she’s the perfect mother. “Elena forces Mia to confront the damage she’s doing to Pearl by telling the truth and bring them closer together.” The beauty of this character dynamic is that neither is the hero nor the villain. There is considerable overlap.

Little Fires Everywhere covers well-trodden terrain – small town with big secrets, big house, perfect suburban life which conceals deep sadness. One of the things that makes the show unique is that this is primarily about motherhood. It veers far beyond the boundaries of making lunches and taking kids to sports practice.

“Nancy Won, one of our writers said, ‘Whenever you write a show about mothers you have to add something else,’” said Liz. They aren’t superheroes, spies, or have high-powered careers. They’re just mothers. ‘The spine of this show is about becoming mothers and being mothers.” This topic has often been shunned in the TV writers’ room because writers are trying to talk about other things happening in your life – crazy dating, weird jobs, juggling family.

Little Fires Everywhere was mainly staffed by female writers. They had an inclusive diverse background with regard to class, race and life experience. “One of the things that felt vital to the show was their experiences of daughterhood and motherhood.” Despite the diversity in backgrounds, there were many commonalities that stood out to Tigelaar (a white woman) in the writers’ room. Apart from informing Mia’s character, “We also explored the concept of White Fragility.” This theme emerged in the TV writers’ room to add even more layers to Mia’s character.

Tigelaar references a scene in the TV show where Mia does Pearl’s hair to go to the prom despite them both being unhappy with each other. This allowed the show to explore the differences between how black and white mothers talk to their daughters during conflict. At one point Mia says, “‘You don’t make the choices. You have the choices.’ This became an anthem of the show,” declared Tigelaar.

The transformative experience of making Little Fires Everywhere was almost a bigger joy for the showrunner than the show itself. “It changed my way of thinking,” she mused.

The TV writers’ room was also staffed by one male writer, Harris Danow. Paradoxically, “He writes teenaged girls better than anyone I know,” declared Tigelaar. “Danow hugely influenced the creation of Izzy, Bill, and the male siblings.” The point to be made is that a show about women can’t and shouldn’t be staffed at the exclusion of men. “Everyone made a valuable contribution to the show.”

Liz Tigelaar advises that emerging TV writers of the necessity to collaborate. “You have to be additive. Everybody is getting a ball, catching the ball, and tossing the ball. You have to dive for the ball even if it’s not a perfect throw. You can’t drop the ball.”

“You’re building on the kernel of what another writer started. You’re doing it with interest, passion and wanting the best for the idea as you build it into a bigger idea.” That’s how the TV show can succeed.

Apart from the camaraderie and teamwork in a TV room, writers also need to be comfortable with being safe vulnerable enough to bring their life experiences and perspective to the process. They need to have level openness and trust to thrive.