Quentin Tarantino’s The Hateful Eight had a notoriously difficult route to the screen. In January 2014, barely two months after the writer/director had announced he was working on a second Western after 2012’s Django Unchained, an early draft of the script leaked onto the internet and caused Tarantino to abandon the project. It was only after a live reading of this draft that he decided to get things moving again, and by the end of that year, cameras had begun rolling in Colorado – using a significantly different script.

Coinciding with the film’s release, The Weinstein Company published the final script online. Though there are some minor differences, this script almost exactly matches the version of the film released theatrically. Now that both scripts are easy to find, it’s worth comparing the two of them and considering to what extent Tarantino’s rewriting process created a stronger film.

Despite Tarantino making a big deal out of his rewrite, however, the changes in the first half of the script are minor; it is nevertheless worth reading the two side-by-side to understand how the numerous small changes in scene order and dialogue work to enhance tension, narrative flow, and character development.

In the second half, however, three important scenes were significantly rewritten – the poisoning which takes place at the midpoint, the reveals at the end of act two, and the final confrontation – all of which changed in ways relevant to the film’s central theme of truth, secrets, and lies. 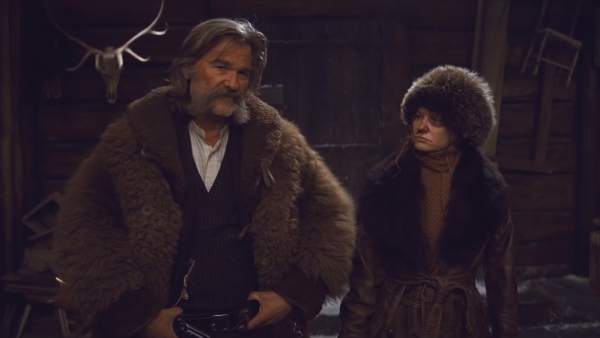 Tarantino fans may have been surprised that the first death in The Hateful Eight doesn’t occur until just over halfway through the story. After a long time has been spent setting up the nine (not eight!) shady figures sitting out a blizzard in Minnie’s Haberdashery, Major Marquis Warren (Samuel L. Jackson), a black bounty hunter, shoots and kills racist Confederate General Sanford Smithers (Bruce Dern) – the midpoint that finally gets the action going.

But as this first murder was occurring, somebody poisoned the coffee, and only Daisy Domergue (Jennifer Jason Leigh) saw. How do we know this?

In the original script, we don’t. The action carries on continuously after the killing; over the following four pages of conversation, the viewer would receive hints in the form of Domergue turning down a cup of coffee and looking on anxiously as her captor John Ruth (Kurt Russell) takes a drink.

But these are so subtle that viewers could easily miss that there’s anything going on. A crucial error made was that the script’s directions give information to the reader that would in no way be communicated to the viewer; not only do they tell us that “Domergue has a secret” but that four characters “get into an extended and spirited discussion about the legality of what just transpired” without giving any way of this being clear on screen. It’s so uncharacteristically unclear that it gives the impression Tarantino knew redrafting was needed.

And redraft he did. The final script adds some structural devices in order to signal what’s going on. Immediately after Smithers’ death, Tarantino gives an extra chapter title: “Domergue’s got a Secret”.

This chapter begins with a flashback to twenty minutes earlier to see the coffee being poisoned, in which a narrator (played by Tarantino himself) explains to us:

Fifteen minutes ago Maj.Warren shot Gen.Smithers in front of everybody. But…twenty minutes ago, something equally as important happened, but not everybody saw that.

You see, while Warren was reminiscing with Smithers about his boy…

And the only one to see ‘em do it, was Domergue.

This results in one of the most suspenseful scenes in the film, as along with Domergue, the viewer is urged to closely watch the coffee pot, begging Ruth to either drink or not drink depending on whichever character they’ve decided is the more hateful. Letting us in on Daisy’s secret allows for a very effective take on Hitchcock’s classic ‘bomb under the table’ analogy.

Voiceovers may be an oft-misused tool in the screenwriter’s arsenal, and indeed the introduction of the narrator at this point in the script is rather clunky; it does leave the reader wondering whether there could have been another, third way for Tarantino to get this information across, such as seeing Daisy watch the poisoning at some point during the earlier sequence. But what this approach does achieve is a firm structural break between the scene about Warren and Smithers’ confrontation and the scene about the poisoned coffee.

Oh, and that direction about the “extended and spirited discussion”? It’s transposed almost word-for-word into part of the voiceover. Perhaps Tarantino always suspected it would come in useful.

The second significantly altered scene comes at the end of the second act, when Warren and Chris Mannix (Walton Goggins), supposedly the new Sheriff of Red Rock, try to work out who poisoned the coffee, which has by now killed two men. 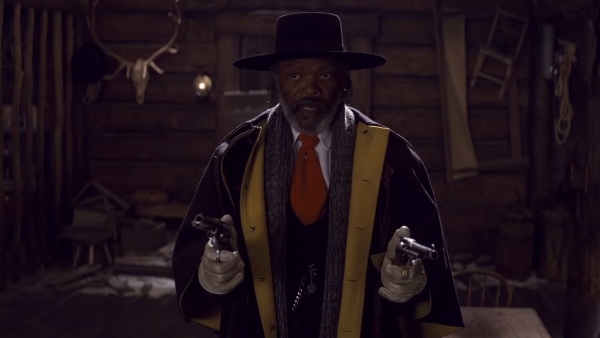 In both drafts, the reveal here is followed by a flashback sequence in which the Domergue gang – Mobray, Bob, Joe Gage and Jody Domergue – prepare their trap. But what exactly the reveal is differs.

In the original draft, Warren suspects both Bob (a Frenchman who is supposedly looking after the Haberdashery in Minnie’s absence) and Daisy are in cahoots with the poisoner, but can’t find any way to prove it. He threatens Daisy using a game of Russian roulette, hoping she’ll give up the name of her co-conspirator. Eventually, Joe Gage admits to having poisoned the coffee.

It’s a rather limp ending to Warren’s turn as a detective, having only uncovered one of the gang, meaning that when we return to the present after the flashback, not much has actually changed. It also means that the viewer finds out about the four conspirators – including Jody hiding in the cellar – before Warren does, which cheapens what should be the perceptive, problem-solving bounty hunter’s time to shine.

In the final draft of the script, however, things play out differently. Warren finds evidence to condemn Bob – in this draft, he’s Mexican rather than French, and Warren knows that Minnie never let Mexicans into her shop. He deduces that Bob’s story about being left in charge cannot be true.

It’s a twist that makes clever use of both Warren’s intelligence and the racial tensions that have been at play throughout the story. Confident that Bob is lying, Warren shoots and kills him, leading to Jody appearing from the cellar and shooting Warren. Mannix attacks Jody, and Joe Gage attacks Mannix. The conspirators are revealed. Warren and Mannix have been in their trap all along, which creates a much clearer dramatic turning point.

The consequences of this turning point can be felt throughout both versions of the film’s final chapter, in which the difference between the two scripts is most notable. In fact, the ending of the original script is by far its weakest sequence.

Daisy and Joe Gage reveal that they are part of the Jody Domergue gang, and they claim that there are fifteen more gang members waiting in Red Rock to rescue Daisy. There is some tension drawn out of Warren and Mannix remaining unaware that Bob and Mobray are members of the gang, and that Jody is in the cellar, but this is very similar to the tension that permeated throughout act two – nothing has happened to seriously shake things up.

It’s not until the last two pages of the script that events finally escalate; the bandits reveal themselves and a shootout occurs, killing everyone. Though reminiscent of Reservoir Dogs, the abruptness of this shootout, and the way it denies all character and thematic development any conclusion, leaves the reader feeling cheated.

The final script, however, spreads the violence over the course of its last chapter. It helps that Warren and Mannix are already aware of the gang, allowing this chapter to be about how they deal with everyone being against them.

Warren coerces Jody out of the cellar by threatening to kill Daisy, then immediately shoots him. Because there’s time to linger on it before the next killing, Jody’s fatal shooting has much more of an effect than in the original draft – a comical effect for the viewer, due to the ease with which he was dispatched after being set up as a criminal mastermind, and a tragic effect for Daisy, angered by the loss of her brother.

This hangs over the tense dialogue that follows, as a more-hateful-than-ever Daisy tries to turn Mannix against Warren using the threat of the fifteen extra men – again, the story hinges on something which may or may not be true. 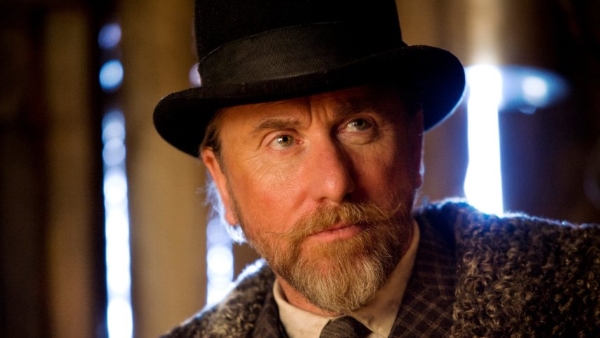 The real improvement to this closing chapter comes in allowing Warren and Mannix to work together in their final moments. After deciding not to believe the fifteen men are real, Mannix kills Joe Gage, but is shot himself. Warren and Mannix, now both heavily injured, are left to deal with Daisy, which they do by hanging her – finally giving her the justice she would have received had John Ruth got her to Red Rock.

Warren declares that he “may have misjudged” Mannix; the two old soldiers had previously fought on opposite sides in the Civil War, but have now overcome their racial tension. The film’s other main theme, that of truth and lies, is also given a suitable conclusion here. Mannix had previously introduced himself as the new Sheriff of Red Rock, a claim which had been repeatedly disputed, but as he hangs Daisy, he proclaims:

As my first and final act as the Sheriff of Red Rock, I sentence you, Domergue, to hang by the neck until dead.

And Warren has no argument with that; whether Mannix ever really was the new Sheriff doesn’t matter now, only that justice is being done.

After this, Mannix requests to see Warren’s letter from Abraham Lincoln. In the original draft, this letter only appears in the opening sequence, and is never drawn into question, but in this draft’s second act, Warren reveals the letter is a fake created to earn him the trust of white men.

In his dying moments, Mannix gains comfort from the letter he knows is false. The lies which got Mannix and Warren onto the stagecoach with John Ruth in the first place have come full circle; their differences overcome, the two men indulge each other’s lies – a wholly more satisfying moment to close on than a sudden pile of corpses.

So, what can we learn from comparing the two drafts?

The importance of dramatic, game-changing events at a script’s turning point.

That a script will end more satisfyingly if the ending draws its themes to a close.

And, perhaps most importantly, that even a double Oscar-winning writer of Tarantino’s caliber can get away with making these mistakes in an early draft, as long as they’re addressed in the rewrite.