The Art of Self-Promotion for Writers

Excerpted in part from 'Real Screenwriting: Strategies and Stories from the Trenches' by Ron Suppa:

Face it folks, we screenwriters can be as invisible as a polar bear in a snowstorm. Out of sight, out of mind. If they can’t see you, how can you expect them to respect you? (“They” being the agents, producers and studio honchos) The challenge, as in any business, is to get brand name recognition — for yourself as well as for your work. What will entice the buyers to access your proverbial portal to find good screen material? What will separate you from the ever-swelling mass of writers registering screenplays with the Writers Guild? In a town where perception is everything, the answer is clear: the power of marketing, promotion, publicity and public and media relations.

Much is made about the value of toiling for years in the Hollywood trenches before “making it.” Those at the top call it “paying your dues.” Baloney. Directors become directors by directing, producers by producing. Rarely do they work their way up the food chain. There is no glory or career edge gained by laboring in obscurity while honing your craft. Hone it right out there in the limelight and let those at the top pay for every comma splice and run-on sentence along the way. After all, you’re already a damned good writer. You know it and your family and friends do too. Now is as a good a time as any to let the secret out. And who is going to do that? You, that’s who. In the beginning at least, you must be the agent that gets you an agent, the manager that gets you noticed. It’s as much your job as the writing itself.

I learned this lesson in my salad days as a producer. I had carried good scripts under my arm, some with name talent attached, but lots of wanna-be producers were running around town with the same MO. In the end, it wasn’t so much the money spent on script options or the genius of my agents that helped me along; it was my decision to hire a publicist. Within weeks I had a coming out story in the trade papers, listing my projects and goals. I was regularly quoted in Army Archerd’s column or noted in George Christy’s party lists. Suddenly, producers and development executives I’d never met greeted me like we were old friends. I had become a member of the club by giving the impression I already belonged. In six months I was offered a three-picture deal at Fox. I had offices on the Universal lot within the year. I’m not saying I didn’t have good scripts that deserved those deals, but they weren’t getting much traction until my new personal visibility opened the door for them.

Name recognition can lead to industry awareness, respect, writing assignments, higher pay and greater creative control over your career. Think, “what can I do today; what friends can I make?” Put yourself out there, where the action is. It’s not why you became a writer, I know. You want your work to speak for itself, I know. It’s unseemly for an artist to promote himself, right? But while it may be true that the meek will inherit the earth, strict adherence to that philosophy won’t get you very far in Hollywood. Truth is, the image of the writer as a shy, retiring recluse no longer fits our job description. It’s a new business in a new time, where scripts take a back seat to concept, casting and celebrity worship. And we writers would do well to modify our battle plan to better equip ourselves for life in this hostile and alien environment.

First, accept the basic lesson of corporate America: do only that which only you can do! The more business-savvy new-agers among our lot have gone way beyond the age-old support group of agents and lawyers and now regularly employ researchers, assistants, personal managers and publicists. They manufacture careers and issue press releases to keep the rest of the business informed of our battles and triumphs. They employ twitter, facebook, instagram and other social media to gain public awareness. This isn’t just ego. It’s smart business.

Remember Joe Eszterhas? He was just another screenwriter with a beard when he leaked his private war with his then-agent Mike Ovitz onto every fax machine in town. He stayed in the scandal sheets by marrying the cast-off wife of the producer of his movie who had dumped her for the star, Sharon Stone (who subsequently dumped him). Makes good copy, doesn’t it? That’s the point. His brand name value contributed to multi-million dollar deals for his pitches and treatments, even in the face of downright flops for the movies he eventually penned. 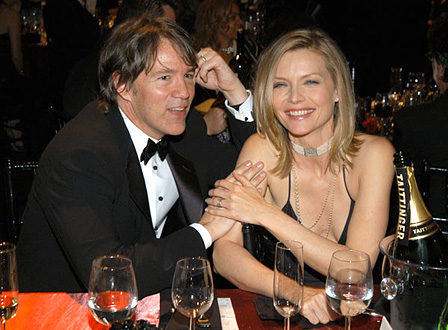 Or how about David E. Kelley? He may be a prolific and talented writer, but why was his face such a magnet for the camera during award telecasts — bypassing other talented showrunners, such as Aaron Sorkin, Steven Bochco, David Milch, Vince Gilligan, or John Wells, seated nearby? Could it partially be due to his wife, the beautiful Michelle Pfeiffer, seated next to him? That’s publicity value. That makes for ratings. That almost makes writers seem glamorous. And it doesn’t hurt when he walks into a room to negotiate a new series concept.

Bruce Vilanch, a writer previously unknown outside certain limited show biz circles, wrote a documentary film called Get Bruce! starring himself as a talented gag writer for the stars. It got him on talk shows. His asking price as a writer soared. He scored his own square on Hollywood Squares.

Take this test. Name a screenwriter, anyone. Should be a snap, this is your chosen field after all. Maybe you’ll say Sorkin or Gilligan, sitting atop today’s hit list, especially since I reminded you of them above (see how it works?). Or maybe you’ll say William Goldman or David Mamet, but isn’t that due somewhat to their fame writing about writing? If you do know the name of a pure screenwriter, it’s likely an accountant’s dream such as Lethal Weapon’s Shane Black (who maintains press-appeal though his scripts haven’t scored big since selling The Long Kiss Goodnight for $4 million in 1994). Or maybe it’s an instant media hit such as Callie Khouri or Diablo Cody who struck the media mother lode by being attractive young women who came out of the box with box office darlings like Thelma & Louise and Juno respectively. Yet I’m betting most will fall back on notorious writer-directors, such as Quentin Tarantino or Oliver Stone, or writer-director-stars such as Woody Allen, or movie stars who write (and win Oscars for it), such as Matt Damon & Ben Affleck — those “and he writes too!” writers who appear on talk shows, merit profiles on ET and Extra, and have their love life scrutinized on TMZ or in Vanity Fair or People magazine.

So, okay, you’re convinced. But you also can’t act, direct, or marry a movie star—at least no one yet will let you. Hang in there. A little personal makeover is in order. I’m not saying you should shell out $100,000 for a full-page ad in the Sunday NY Times. There are baby steps you can take to get started. But before you rush out and hire a publicist or invite reporters from Daily Variety or The Hollywood Reporter to lunch at the Four Seasons, remember that it helps if you have done something worth shouting about. While a little media coverage is priceless (literally), journalists usually require something newsworthy to write about.

Even if you have done something of interest, you may have to stand up and wave your arms around until somebody notices you. All journalists love a good story but don’t expect them to come hunting you down for one. Fame comes most often to those who seek it. Of course, you have to give them something to write about. There is no marketing magic that can turn a mediocre talent into a hot ticket. First, you’ve got to have the goods. Your talent is your best selling point. But knowing how to communicate that talent to others will help you get the assignments and recognition that your work deserves. Ask, as if you were profiling yourself, what’s so impressive about you? What is your image, your signature accomplishment? You’re a writer—find a good story hook, like the real life trials that inspired your film or TV show. Maybe you have a personal story that complements the one you’ve written. Or perhaps you’ve taken a maverick approach to your craft or to sold your script in an unusual way. Remember that writing those compelling stories with great characters is only the first step in getting those “A” list assignments and industry recognition.

Have a script in production? Ask the unit publicist for your film or the studio or network publicity department to be sure and include you in their electronic press kits, press junkets and on-set interviews (they may simply forget about you if you don’t). Make their job easier by providing any interesting story history, film biz anecdotes, or heart-warming personal vignettes that make for good copy. If your film makes it to a film festival, be there, hobnob, and offer yourself for interviews and seminar panels. Be animated, positive, and quotable. Create a little controversy when you speak. Be a devil’s advocate. Create your own news; Fox News does it all the time.

Maybe you can send a ready-to-print version of your recent sale to your alumni newsletter or to a publication that focuses on the subject matter of your script. Be sure to accompany it with a bio and a nice black and white 8 x 10 (an informal one with you and the star or director is best). See if your school or university can use a luncheon speaker from the film world for one of their scheduled functions. Book yourself as a celebrity guest on a local cable talk show. Offer your services for a charity affair or participate in a community or industry panel that addresses issues you may have drawn on for your script. Testify before a congressional committee!

Knock yourself out, but be prepared to move fast. The time to act is when your story is still a current event—a week after your freelance Law and Order: Criminal Intent has aired or your film has left the theater is often a week too late. Second chances are for lottery players.