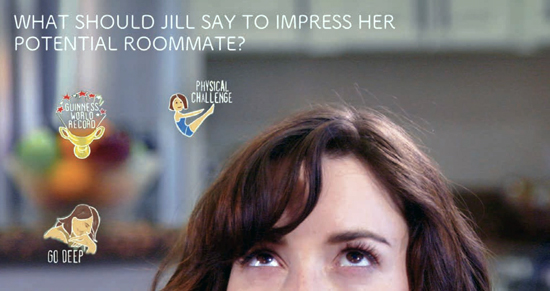 Interactive movies, television, and ads are here to stay. While Netflix’s Black Mirror: Bandersnatch thrust the medium into the mainstream, storytellers have been creating this type of content for decades. In the ’70s, it was participatory role-playing games like Dungeons & Dragons. The ’80s brought the Choose Your Own Adventure books, and more recently, video games incorporating narrative choices like those from Telltale Games found great success.

Now as a new wave of television and film producers start making choice-driven entertainment for the first time, how does one evolve from writing linear narratives to providing a meaningful level of choice for an audience? Here are five things creators need to keep in mind to make successful interactive content.

1) Give viewers a clear role

Any main character, whether protagonist or antagonist, needs a clear role and objective (think of Luke Skywalker’s drive to destroy the Death Star, or Darth Vader’s desire to protect it). When viewers know exactly who they are “playing” and how they’re expected to participate, they have a reason to care and to choose one path over another. This helps viewers invest in the story emotionally and feel they have a real stake in its outcome.

It’s not just about engagement and “stickiness,” but about emotional connection to the content. When viewers buy-in on an emotional level, they are more likely to stay with your story to the end.

When trying to determine if a choice is meaningful enough, ask yourself if the options presented will create conflict in the viewer. Conflict makes choices emotionally impactful and meaningful. It also makes viewers wonder what would have happened if they had chosen a different path. This investment, in turn, inspires replayability and also drives conversation with the viewer’s friends about the differences in their choices and the results.

To ensure compelling options, avoid clear and easy answers, choices that are just two ways of saying the same thing, and arbitrary choices—go right or go left, for instance. To help you track the choices your viewers make and where each choice takes the story, consider creating a branching narrative map, like this one.

3) Make sure the viewers’ choices count

The choices a viewer makes should have an impact. Key to delivering on the promise of truly meaningful choice is showing viewers that their decisions had a real effect in shaping the story and characters.

Immediate feedback after a choice has been made is crucial, both in the interface—via a button or sound or animation—and in the story itself. Just like when a user clicks on a website link and expects to navigate to that destination swiftly, so must your interface and story respond to the user’s selections. Most importantly, make sure the final outcome of the story is actually shaped by at least some of the viewer’s choices. They have invested time and attention in your content, and you must pay them back by letting them feel it was worth it.

When presenting choices and branches in a story (the point at which the viewer makes a decision that takes the narrative in a specific direction), make sure the flow of the video remains smooth and seamless. Immersion in the narrative is key, but things like clunky interfaces, long awkward pauses or choppy editing will pull viewers out of it. When a choice is presented on-screen and the viewer is making their decision, let characters keep talking or let the action continue in the background. Pay careful attention to the way you edit the branching points after a viewer’s choice. It’s key that the “fork in the road” is not noticeable.

5) Make it interactive from start to finish

This may sound basic, but it’s important to keep in mind that you are creating an interactive experience and need to deliver on that. The audience has agreed to participate. They are leaning in and waiting to interact with your characters and story. If you don’t deliver with choice and interactivity, they will slide back into a passive viewing experience. Start the interactions early and keep them coming!

By following these five tips, storytellers, producers and narrative designers of any background can bring meaningful interactivity to their entertainment projects. The future of entertainment is choice-driven. Don’t be left behind.