The Rarity of Rug-Pulls in the Modern Era of Entertainment

Pulling the rug out from under an audience is tricky work these days. We’ve all seen so many hours of entertainment, even the casual viewer has become well-versed in narrative structure, the tropes of Hollywood storytelling, and genre clichés. For a screenwriter, trying to write a screenplay that will surprise an often jaded audience becomes a particular challenge. With the term “been there, done that” ringing in everybody’s ears, can any movie or show’s narrative truly surprise? Are rug-pulls the rarest of the rare in narrative these days?

Especially difficult is the lot of the procedural or mystery writer. Trying to surprise an audience with the revelation of the killer or culprit surely must be one of the most problematic tasks in screenwriting. After all, by the time the average child finishes elementary school, he/she will have seen 8,000 murders on TV alone. Imagine the number for those who’ve graduated from college! Trailers, advertisements, and online chatter make surprises even more difficult. Unless you live in a cave, it’s hard to view any movie or show with zero expectations, to say nothing of spoilers cueing you into the twists, turns, and endings. Spoilers have become their own veritable cottage industry on blogs and websites like Twitter, Reddit, and TheMovieSpoiler.com. (BTW, from here on out, there will be spoilers. You saw that coming, right?) 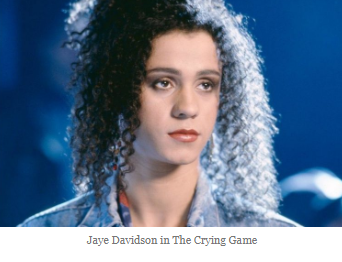 Not too long ago, keeping rug pulls a secret was wholly possible in pop culture. The revelation that the Planet of the Apes (1968) was actually Earth, that Darth Vader was Luke Skywalker’s father in The Empire Strikes Back (1980), and that Dil, the female lead in The Crying Game (1992), was actually a man, belong to an era long before the Internet made the world one big water cooler share. The Crying Game is of particular interest, as its rug-pull about Dil (Jaye Davidson) was kept secret by critics and audiences for months before the Academy let the cat out of the bag by nominating the unknown Davidson for their Best Supporting Actor Oscar.

If the Internet was as prominent in 1992 as it is now, that film would’ve likely been spoiled before it made it out of test screenings. Today, when filmmakers like Quentin Tarantino implore critics and audiences to keep secrets, as he did after the Cannes premiere of Once Upon a Time in Hollywood and its unexpected third act, the leaks can’t help but spill out anyway. That last half hour, with the rewritten history of the Manson family murders on Cielo Drive, still stunned audiences, but its rewriting of the fate of Sharon Tate still managed to be bandied about everywhere online before the film opened nationally in August.

Rug-pulls are not the end-all in any medium, but the difficulty in making the element of surprise truly work in storytelling has become part of the pressing challenges for anyone in show biz. That’s one reason Rian Johnson turned the whodunnit on its ear in 2019’s Knives Out. Sure, people might have expected a murder mystery concerning just who offed Christopher Plummer’s rich patriarch in the movie, but Johnson knew he’d have to make his story work harder than that. Thus, the filmmaker revealed just 30 minutes in that the character took his own life. The core of Johnson’s mystery focused primarily on newer, twisty mysteries within his story that would occur in the second and third acts. 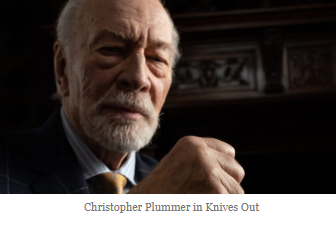 Because surprises are getting harder and harder to do, procedurals on television have been forced to rely less on “a-ha!” moments, and more on other factors in their storytelling. These days, most detective shows concentrate on character or style, even twists in the narrative that have little to do with the crime being solved in the final moments. In most shows, ‘character is king’ anyway, but it’s even becoming more and more prevalent in procedurals. Shows like NCIS, Blue Bloods, and Hawaii Five-O spend as much time on creating the story of their ‘work families’ as they do in developing their crime yarns.

On some shows, the eccentric characters sleuthing become as thorny as the crime itself. That’s true of procedural comedies like Brooklyn Nine-Nine, soapy teen fare like Veronica Mars, or HBO’s truly bizarre new miniseries The Outsider. The premium cable channel’s latest is adapted from a Stephen King mystery, and the personal peccadilloes of the two lead murder sleuths (Ben Mendelsohn and Cynthia Erivo) are almost as mysterious as the seemingly supernatural crimes that they’re investigating. The oddities in The Outsider don’t stop there as its stylistic choices make for as many surprises as those in the narrative. The strange angles, the incredibly close shots juxtaposed with far-away ones, and the unrelentingly tense music, are all working to make the miniseries feel mysterious even if its doppelganger storyline seemed obvious from the pilot. 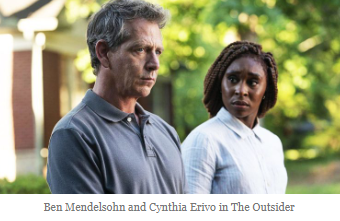 Horror movies are having even more trouble finding new ways to skin the proverbial cat. Perhaps that is why there are so many reboots and relaunches in the genre. Use what’s worked before, seems too often to stand as the conventional wisdom guiding studios rather than trying for a story that’s truly fresh and surprising. The Turning, that opened this past weekend was wholly predictable in its jump scares, stock characters, and set pieces. The only genuine rug-pull found in the movie was the abrupt, non-ending that failed to resolve the mystery or the horrors experienced by Mackenzie Davis’ nanny character. Choosing to not tell what happened is a rug-pull, sure, but that kind isn’t exactly encouraging.

In his famous screenwriting how-to book Save the Cat, the late Blake Snyder wrote that there are only so many stories to tell and only so much time to tell them. He was correct, reminding us that even the most surprising stories are still going to check very well-known boxes and inevitably fall into the construct that most two-hour movies or a one-hour TV episode must follow to use its time wisely. Still, even finding the wiggle room in those boxes is complicated.

One of this season’s most surprising hits is Parasite, another film best to watch without knowing much about it. Rarely have rug-pulls been as shocking, effective, and successful as the one well into the second hour of the black comedy’s running time. Does it help that the film is foreign, and therefore its build at the box office and popularity within the public discourse has grown slower and more steady than an American film? Indeed, though its success ultimately has more to do with the storytelling than its timing on the national stage. The fact that its rug-pull is so unexpected, yet entirely logical within the story’s framework, is wonderful if rarer and rarer in cinema these days. 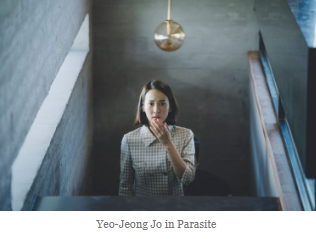 The success of Parasite proves that storytelling can still mine ginormous surprises and not be spoiled in the discourse before broader audiences get their chances to experience them. However, in an age where communications can travel everywhere within seconds, and audiences are bombarded with amusement, it is a constant challenge for any storyteller to surprise and delight. Maybe the bigger surprises lie more in how the variables are mixed together – character, plot, style – more than a singular twist or turn.

In the 18th century, Voltaire exclaimed, “Originality is nothing but judicious imitation. The most original writers borrowed from one another.” That was true then, and it’s certainly true now. Every writer has perimeters. Every storyteller has only so many ways to move a story along. The challenge is to make the journey seem as exciting as the destination, especially if we know exactly where we’re going.

Jeff York was named one of the International Screenwriters Association's Top 25 Screenwriters to Watch in 2018. He has written 12 movie screenplays, two TV show treatments/pilots and two plays. His works have figured in the finals of 71 screenwriting contests and counting. He's been a Screencraft Fellowship finalist twice.  After 20 years in advertising, running a couple of creative departments, and winning almost every industry award, Jeff took his lifelong love of going to the movies and decided to take a crack at writing a screenplay. It was a character-driven horror movie...