So much of good storytelling is about cause and effect, set-ups and payoff, motives and consequences.

Consider for a moment: if there are two separate story paths that exist in each script we write, then there is a story engine – a consequence mechanism that drives each and they are quite different from one another:

The Plot Line moves forward when we ask the question: “What happens next?’

The Emotional Line advances when we ask, in contrast: “How will my characters react to the next turn-of-events?”

Every story begins at the same place. The story always starts with a status quo – life as normal – until the Inciting Incident occurs. Then suddenly, something changes and our characters begin their journey by reacting to it. Nothing happens without the Incident and that subsequent and necessary Reaction.

The model is always: 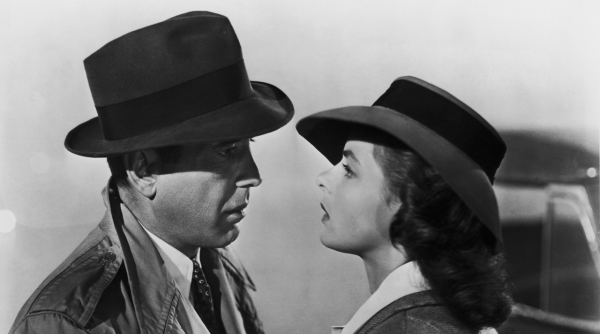 For example, in the movie Casablanca, Rick is happy running his little café “not sticking his neck out for anyone” (status quo) until his old flame Ilsa arrives with the guy she dumped Rick for (Inciting Incident). Rick’s old wounds are ripped open (emotion) and he must eventually decide what to do about Ilsa, the letters of transit, and of course, those ever-present Nazis (reaction/consequence).

The Incident starts the ball rolling. We have an emotional reaction to this event which produces a physical action, which in term elicits its own emotional response down the line and the requisite action that follows.

In this way, emotions are always the motive for what we do and consequences are the results of acting upon those motives.

If we’re honest with ourselves, we all have our own hot button issues to which we react in predictable ways. It’s only human nature. For example, some people get sad or angry when they receive a rejection to a submission, while others double down emotionally and get back to work. Conversely, some people are elated and celebrate when they get a piece accepted for publication, while others become worried that they won’t find a supportive audience. And still others might simply acknowledge the fact and get to work on the next piece or writing.

So, somewhere in the cobweb-covered vault we call the human psyche, there must be a rule book inside all of us.

If you doubt it, ask your spouse, partner or your parents the following question:

“When I am [sad/angry/frightened/threatened], what do I usually do?”

But be prepared to be surprised. We, as people, hardly ever see ourselves as others see us. Your parents or partners’ answers may surprise you.

In the end, we’re all predictably different…and so must our characters be.

As the writer, you should never be surprised by the way your characters act in your stories. Each character is unconsciously designed by you to react in a specific and predictable way. This is natural and necessary because the emotional change we seek in our protagonist at the end of the story – the very thing that makes the character-driven story so powerful and relatable – occurs at the very moment that s/he breaks out of their old pattern, and creates a new rule – and identity – for themselves.

Storytelling masters like Michael Hauge and Christopher Vogler talk about this rule change being a return to the very essence of who a character really is, a kind of stripping away of the emotional protective layer that life forces us all to create as we grow and react to the world and its punishments. This change is what brings our hero one step closer to self-realization and their true nature.

So…let us turn this vague concept into something concrete and useful.

Let’s take a look at the inherent rules you have given to your characters in your current work.

Below is a blank chart that shows the various possible character archetypes in your story along the top and the emotions that they are likely to go through in the course of the story listed along the left side. Both the names and emotions can be easily changed to fit your current tale.

In the appropriate box, write the rule that this character will follow when confronted with this emotion. For example in the first box would go the answer to, “How does the hero react when s/he is hurt” The boxes should expand to fit whatever notes you want to include.

Complete as many boxes as you can. Empty boxes may indicate that more thought may be needed to enhance your understanding of the character.

Beware: You may think that there are nuances and subtleties in the way a character would react to, say, being hurt, depending on the cause, but if you look deeper you will find the controlling reaction should always be the same – until growth takes place and that particular rule changes. 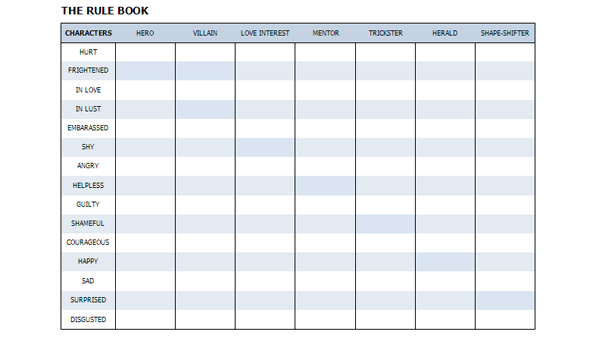 Once completed, you will have a snapshot of the emotional range of your story.

This is your canvas.

This is where you will deepen your story.

Use as many colors and techniques as you can.

These emotions, taken as a mosaic of the character’s psyche, supply dimension and depth to the narrative, leading us to understand who that character is, why s/he must change and what they have the chance of becoming.

By completing your own Rule Book chart, you will be able to see the similarities and differences in your characters. Some of these differences will suggest plot points, twists and turns you can use that you might not have seen before.

And by understanding the emotional rules of your main characters, you’ll be able to create the most powerful and dramatic emotional journey for your hero.

And isn’t that what we all came to see?

Once you’re finished making the initial pass, we can start having fun!

Look at any missing boxes. Are these emotions that your character should have or are they not important to the story? Try putting yourself in the character’s shoes – based on what you know of them already, how would these emotions make them react? If you used someone you already know as an inspiration for the character, imagine them is a similar situation. Remember, the more you know about the character, the better they will respond to what you want them to do.

Now, highlight the characters that have similar emotional reactions. Do you have characters that overreact when angry or shame-filled? Or ones that recede into the woodwork when feeling shy? These characters might share qualities that make them potential allies – they have something in common and this might be useful in upcoming scenes. However, while it might be interesting to have two similar people reacting the same way in the same situation at the same time, it might not make for good drama. Play with it for a while before you commit to it.

Now look at those characters that have emotional responses that are completely different.

This can play out in a couple of ways:

The characters could be complementary, such as one that needs to be cared for when hurt or frightened and another who is happiest when caring for others. This creates a natural bond – and may be something you hadn’t realized before. They can make for strong allies.

However, characters can also clash and be naturally adversarial if their emotional responses do not complement, such as when one is deeply embarrassed when confronted and another is abusive when angry. This creates organic conflict on an emotional level and has the potential for exciting drama.

What makes this character relatable? What will the producer find endearing, interesting and/or vulnerable about this character based on their emotional response? This is vital because your ability to attract an audience depends upon making this connection, especially with the major characters.

Based on your chart, which characters are driven to move forward but are emotionally held back by something? This illustrates their basic humanity and builds that audience-protagonist connection.

In what ways do the emotions of any individual character seem to contradict each other? That is to say, in what ways are your characters broken? We like our characters, especially the Heroes and Villains to be a bit like broken toys, walking/talking puzzles with a couple of pieces missing.

So, in what way are they strong yet helpless? Happy yet have real shame issues? Frightened yet courageous? This is the real nature of a human being – a collection of contradictions that fight for control in our lives. Through this, the reader will be able to see something of themselves in the characters. Seeing those missing pieces put into place makes for satisfying storytelling. And it’s what makes a dedicated fan.

At the heart of every character-oriented story is the emotional arc of the hero – that profound change that makes all the conflict and turmoil in the second half of the script worthwhile. And this chart shows you the way to create that. If, say, your hero’s main emotional stumbling block is that she can’t get past her anger, then the change is:

… and each trial that she faces from the First Plot Point through to the Climax peels away at that anger – layer by layer – like the leaves on an artichoke to reveal the true nature that lies at the heart of every character. (Keep in mind that we’re looking for an artichoke here and not an onion: a weak character is one that has nothing deeper than anger to sustain them and it just doesn’t work.)

Similar arcs for the other emotions we’ve talked about would be:

Play with this awhile and you’ll see how it can deepen your understanding of your characters. The more you know about how they can react, the most fully you can write them.

The Next Step: The next task in the process of understanding characters is to chart out the way each character relates to one other, highlighting and developing the potential conflicts and contradictions we’ve discussed here.

These, then, are the tools we can use to build the conflicts throughout the story for both our plotline and our emotional arcs.

Remember: creating three dimensional characters in your story gives the audience someone to identify with and root for. It creates that vital, emotional bond between the writer and reader, whether it’s a script reader doing coverage on your work or a producer considering the script for his/her next project.

And it makes your writing a deeper and more authentic expression of who you really are!