Villains And Their Functions In Stories

“…But when the tragic incident occurs between those who are near or dear to one another—if, for example, a brother kills, or intends to kill, a brother… or any other deed of this kind is done—these are the situations to be looked for by the poet.”
- Aristotle, Poetics

When Aristotle wrote his seminal text on the elements of drama, he advised storytellers, over 2,500 years ago, to keep the conflict personal. Shakespeare certainly knew how to do that, as the many family-centered betrayals in his work demonstrate. And Disney certainly knew about Shakespeare, hence the “brother kills, or intends to kill, a brother,” angle that fuels both Hamlet and The Lion King ended up spawning two villains for all time: Hamlet’s treacherous (and murderous) uncle King Claudius and Simba’s treacherous (and murderous) uncle Scar (voted the Number One Disney villain ever by The Huffington Post.) 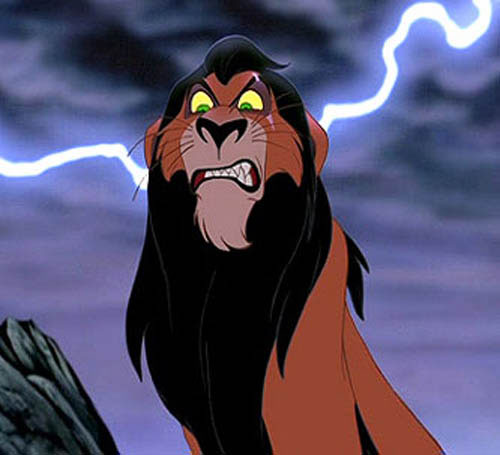 The original screenwriters of the 1994 animated The Lion King, Irene Mecchi, Jonathan Roberts and Linda Woolverton, used the comeuppance of the villain Scar in a different way than Shakespeare used Claudius. Though both characters murder the protagonist’s uncle, in Hamlet, the titular character must kill Claudius in order to put his own soul to rest.

Simba, however, must not directly kill Scar in order to show us that he is the more worthy leader. Here is one way to use a power-mad and largely out-and-out evil villain in a way that helps us tells a more cinematic hero’s journey tale. Simba’s adversary is as awful as Simba is good, and because of the tale’s more mythic structure, this distinction between hero and villain works well.

Our expectations for clues into the causes of Scar’s dysfunction are not fueling our adrenaline on the way to the outcome. However, for Simba to attack Scar in a vengeful rage, as Hamlet does Claudius, would undercut the reason Simba needs to be better than his adversary. Hamlet is killed by Laertes because of the vengeful action he takes against his father, and it is Laertes making peace with Hamlet even after this act of violence, that rounds out Shakespeare’s tragedy. In neither case does the protagonist make peace with the villain, who is there to provide an outlet for revenge, whether acted upon or not.

Let us remember that we speak here of villains and not anti-heroes. Tony Montana and Tony Soprano are bad people doing bad things and making us question our identification with them. It is not only that they are the protagonists of their stories that makes them distinct from the designation of “villain,” but also that, because they are the main characters, any good person coming into opposition with them is, by definition, not the main character.

A protagonist on a journey of inner growth and change (which career criminals like Montana and Soprano are not) must come into that opposition with a true villain that represents the opposite of the essentially good hero. (And we can anticipate a debate over Breaking Bad’s Walter White here—who is, overall, a good person doing bad things and therefore can come into direct opposition with villains far more villainous than himself!)

In Jordan Peele’s Us, we find a very intriguing spin on the function of villains in a script. In fact (spoiler alert), the villain here turns out to be the very protagonist in whom we had invested our sympathy. However, along the way, the person we take for the villain provides some valuable lessons for another way to approach villainy, and that is to ensure that the “bad” person in your story holds up a mirror to those tendencies toward badness that your protagonist carries within (as we all do).

“The best monster movies … allow their villains to have these different layers. You are meant to be terrified … but also to relate to them on some level.”
Jordan Peele 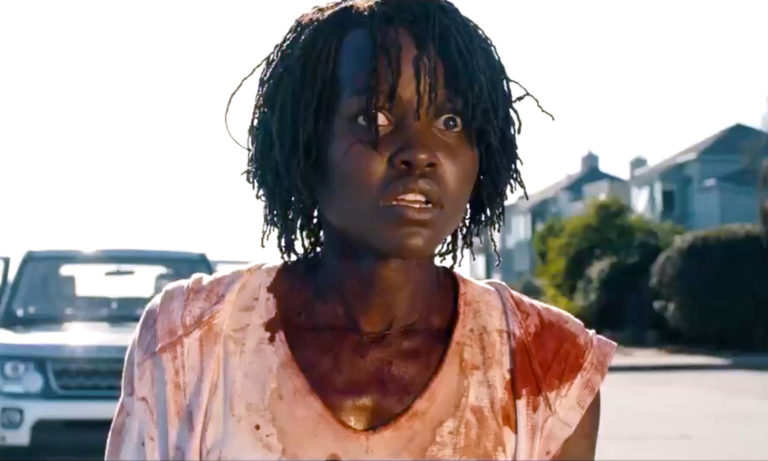 As such, for much of the length of Us (about a parallel race of people kept enslaved underground while their counterparts enjoy normal life in the real world), the righteous anger that fuels the villain (our hero Adelaide’s doppelganger antagonist) feels increasingly like the expression of an injustice that Adelaide somehow spent her entire life ignoring. How true that turns out to be, but the other way around, as we realize that Adelaide herself was the doppelganger and it is the villain of the story who has come back to try and reclaim who she was before the switch. (Yes, it’s as mind-warping in the film as it sounds on the page.)

Yet, within this dichotomy is a wonderful example of how to keep your villains complicated, and not drawn along such clear lines of good and evil.  A layered villain is always something an audience will remember.

And it could be argued that nobody knew about this principle more than Alfred Hitchcock and the various screenwriters with whom he collaborated in his career. By the time Hitchcock got to Vertigo, Psycho, and Marnie, his protagonists went beyond anti-heroes into tragically damaged people who were destroying other people’s lives strictly because of their damaged psyches. In Vertigo and Psycho, Scottie Ferguson (James Stewart) and Norman Bates (Anthony Perkins), respectively, are beyond redemption.

Only in Marnie are we offered the hope of some kind of healing, and even then, Tippi Hedren’s title character is only offered that healing at the hands of Mark Rutland (Sean Connery), a self-confessed “sexual blackmailer.”

But, as Shakespeare said, “What’s past is prologue,” and Hitchcock knew the value of a complicated villain well before the aforementioned films. With screenwriter Ben Hecht, he crafted one of the most agonizingly sympathetic horrible people in the history of cinema: the weak-willed, mother-dominated Nazi Alex Sebastian (Claude Rains) in Notorious. For the uninitiated, Notorious tells the story of Alicia Huberman (Ingrid Bergman), Americanized daughter of a convicted Nazi collaborator who, although she hates everything her father stood for, is pressed into service as a spy to infiltrate Sebastian’s Rio de Janeiro compound–this is in 1946, a year after the end of World War II, when a cadre of Hitler’s followers who will not go quietly are planning a comeback.  Alicia is recruited by government agent T.R. Devlin (Cary Grant), and the two fall in love even as he must essentially pimp her out to Sebastian—a man who once knew Alicia and has romantic feelings toward her.

Taking it as far as it can go, Alicia ends up marrying Sebastian, and when he finds out she is a spy, his guilt over his susceptibility to the seduction, along with his hopeless dependence on his controlling mother, turn him into a simpering, helpless little boy. As Devlin comes to rescue Alicia, Sebastian’s Nazi colleagues realize his betrayal and are clearly moments away from killing him. Sebastian begs Devlin to take him away, too, so that he will not suffer such a fate, but it’s no go. Our “bad guy,” Sebastian walks toward his death, and even though he represents one of the most hateful groups of people in history, we cannot help but feel for what a fool he’s been. And we reflect on his immature need to fall in love with Alicia as his ego-driven Achilles heel. Never has a villain been someone more deserving of his terrible fate, or more of a pitiable little sad sack at the same time.

The Lion King, Us, and Notorious all uphold the tenets of Aristotle’s Poetics, in that they keep the conflict centered on a relationship as close as one can get. The first involves the murder of a brother, the second the murder of one’s own self and the third the betrayal of a husband by his wife. Maybe the story you are developing does not involve such close ties, but if you want the conflict with the villain to pack the same kind of punch as Aristotle suggests, keep in mind that the deeper the connection goes, the better.