What Screenwriters Can Learn from the Oscar-nominated Live Action Shorts

REPOST: It’s a shame that the AMPAS has decided to give out the award for Best Live Action Short winner during a commercial break at the Academy Awards telecast on February 24, 2019. No artist who wins an Oscar should be denied his or her time in the sun. It’s especially egregious given that a short subject winner could give every budding moviemaker hope that they too can make it in Hollywood but hearing from those triumphant could yield some worthy advice or inspiration.

The Academy may cave, as they have all year after floating trial balloons that crash and burn, but if audiences don’t get to hear much from the Live Action Short winner, at least they can experience the work as both the Live Action Shorts and Animated Shorts have been in theaters. And in watching them, the budding screenwriter can learn a lot about storytelling, as well as how to make their own films to break into the industry.

Writing stories trimmed of fat and so simple that they’re easily sellable are givens for any screenwriter. Following such practices in shorts under 30 minutes, as the Academy rules demand, is all but mandatory. Streamlining scenes, trimming dialogue, and narrowing the scope of the narrative – these are all vital elements in a compelling short. 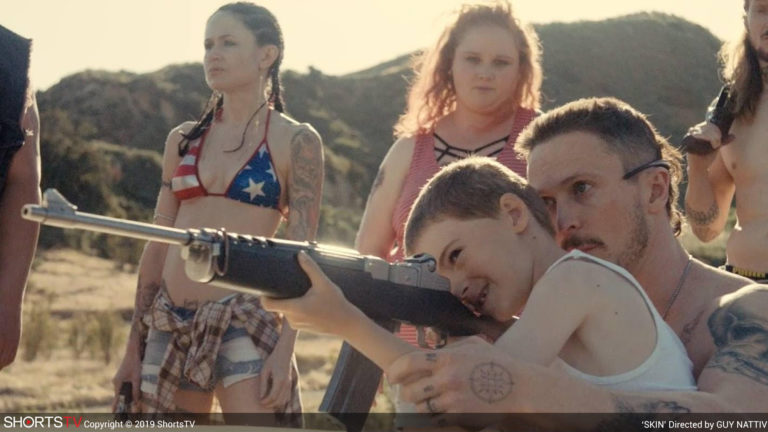 In this year’s sole American entry Skin, filmmaker Guy Nattiv tells his story about a racial conflict spanning weeks in several short-handed sequences. He introduces his main character Troy (Jackson Robert Scott), a sharp young boy, who’s unfortunately under the influence of a reckless and racist father (Jonathan Tucker.) His patient mom (Danielle McDonald) tries to keep a steady hand, but her husband likes to swear, drink, shoot off guns, and carouse as an adult in front of the 12-year-old like he’s one of his gang members. All of this gets told in a matter of minutes.

Nattiv doesn’t waste time on the centerpiece of his film either when Troy watches his dad, and his redneck buds beat up a black man (Ashley Thomas) in a grocery store parking lot. From there, weeks pass as the victim recovers and plots revenge. Meanwhile, Troy’s innocence washes away more and more due to all that he’s witnessed. These scenes set up an ending that’s too on-the-nose, but it still packs a wallop.

Film is a visual medium and the better shorts make the most of the camera rather than words. Wall-to-wall dialogue is hard to pull off in the short form. And if it’s trying to cover exposition, your story’s in trouble. Brevity is always better. Comedies that use such rat-a-tat banter, like the latest animated short Animal Behaviour from Canadian filmmakers David Fine and Alison Snowden, are the exception. The strength in their Oscar-nominated short comes from cartoon animals aping the dynamics of humans in a psychotherapy group session. A lot of dialogue is necessary there to spoof angsty adults and create tension amongst the patients.

More often than not, however, the strongest shorts rely on pictures to speak a thousand words as in Marianne Farley’s live-action short Marguerite. In this moving story, a young, female caretaker named Rachel (Sandrine Bisson) tends to the title character (Beatrice Picard) who still lives in her own home. There Rachel bathes her, dresses her, and manages the small chores that Marguerite can no longer manage. Most of the drama occurs in their subtle movements and facial expressions interacting with one another, especially when the older woman finds out that her nurse is a lesbian.

The Fewer Locations The Better

If you’re a screenwriter, you know producers are always asking for feature-length scripts with minimal locations. If that’s an issue for feature budgets, it’s even more so for shorts. Few locations, and preferably indoor ones, keep production costs down. Way down. As more and more scripters decide that the most impactful way to enter the business is to make their own short film to start with, it behooves each of them to spend as little coin on their project as possible. Screenwriters can write short films with multiple locations, casts, and costuming, but it’s only asking for trouble. Best to show how talented and frugal you are by telling a simple story well that’s not dependent on too much window dressing.

Rodrigo Sorogoyen’s Spanish live-action short Madre (“Mother”) does just that as one of the five up for Oscar gold. Other than a few cutaways to a barren beach – with no actors – the whole of the 19-minute drama takes place in the apartment of a young, divorced mother (Mara Nieto) in Spain. She’s chatting with her mother (Blanca Apilanez), after returning from the market, when she gets a panicked call from her young son (Alvaro Balas). We never see the boy, only hear him on mom’s cell, but he’s in a terrible spot. While vacationing at a French beach with his dad, he’s suddenly left alone. Mom’s reaction goes from being miffed at her careless ex to terror as a predator starts approaching her boy, all while his phone’s battery is dying, all in the course of a 15-minute frenzied conversation.

It’s incredible how much tension Sorogoyen wrings out of the situation, considering his camera does little more than follow mom around the room as she paces in panic. It’s a credit to the strength of the story, and the filmmaker’s POV to put us right in that room with the two women as their world starts to crash around them. And he saved a ton of money too. It is shrewd storytelling and budgeting.

Being Provocative Will Break Through

Want to get people’s attention and make a bold name for yourself? Be as provocative as hell. Shorts have to cut to the proverbial chase so that chase might as well be as audacious as possible. It indeed is a characteristic that four of the five live-action shorts have this year as they all are about child abuse in one way or another. Putting children in is certainly provocative, and some might even say, exploitative, but this year’s crop of shorts may have chosen that theme as a reaction to the #MeToo Movement. All of them are about toxic masculinity in one way or another, and the shorts category tends to be political anyway. 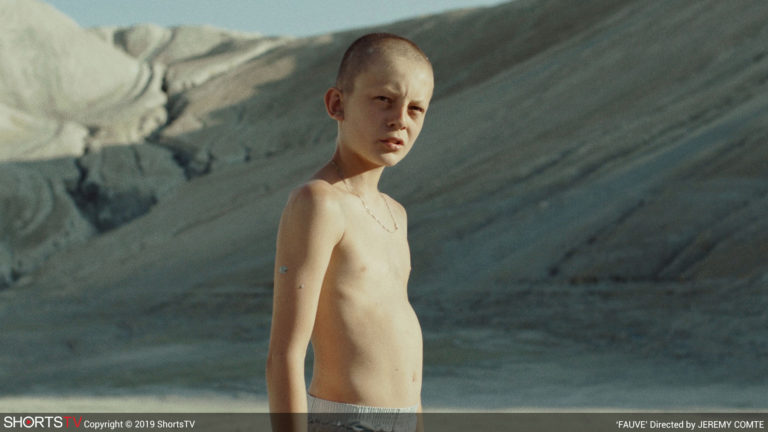 In the 17-minute Fauve, the second finalist from Canada, two friends (Felix Grenier and Alexandre Perreault) venture out together with a teasing, competitiveness to their every move. As their game of bravado and one-upmanship accelerates, they find themselves on a surface mine, climbing up and down the mountainous piles of mined earth at the off-limits quarry. Filmmaker Jeremy Comte may be filming children, but the machismo that infects boys at such an early age is almost epidemic in his subjects. They are reckless, out of control, and mining their own doom in that location and it will haunt you long after it ends.

And as if such topics as beleaguered children aren’t shocking enough, the fifth and final nominee in the Live Action category is Irish filmmaker Vincent Lame’s Detainment, a 30-minute short that has residents of England petitioning to have it withdrawn from the Academy Awards competition. Why? Its subject is the infamous abduction and murder of the two-year-old James Bulger in Bootle, England back in 1992. The case was so shocking and controversial, not only because his abductors were two 10-year-olds, but because their sentencing was deemed far too light.

Not only did Robert Thompson and Jon Venables get sentenced to detention due to their age, but the two were released a scant eight years later on their 18th birthdays. To add insult to injury, the two screwed up royally and landed back in jail. Thompson breached terms of his parole, while Venables got caught with child abuse images on his computer. Lame’s film deals with the interrogation of the two boys after being apprehended and flashbacks to their crimes. It’s all harrowing, very well acted, particularly by the two boys playing Venables (Ely Solan) and Thompson (Leon Hughes), and provocative to say the least. It’s the talk of the five, but will that give it an edge when it comes to Academy voting? My guess is the outlier about the senior citizen may stand apart more for most voters, particularly older Academy members.

Drama Has Its Advantages

Actors will always tell you that comedy is harder than drama, but rarely does the Academy give comedy the same respect in its nominations. The same is true in the Live Action category. Rare is the comic work here, although the Animated Shorts tend to be more balanced between cartoons that make you laugh and those that are dramatic. If a story is a drama, it has a better chance of getting Oscar attention, particularly at the Live Action Short level. Six out of the last eight winners in the Academy Awards category were dramas. And all 15 nominations in the previous three years have been dramas.

All five live-action short nominees this year are affecting and challenging works. Four will make you very uncomfortable, but all five will move you. And for film fans and screenwriters, they serve as lessons in the marketplace, as well as how to get attention in a cluttered world such as show biz.