When Do Screenwriters Know It’s Time For Representation?

Literary Manager and producer Alexander Robb from Insignia Entertainment discusses the convoluted path of screenwriters getting a manager.

I’m gonna take this from another angle. Some folks out there have a misconception of Hollywood as a place where you can have overnight success. Sometimes it seems like talent explodes, and it does, in an almost instantaneous moment. Especially for actors and actresses. But the truth is, most successful people in Hollywood, and screenwriters in particular, have plotted a strategy forward for years in the making. The adage of a ten year overnight screenwriting success has some truth to it.

I mean. Sure you can write a movie script, sell it, get a film made and take off. But the reality is, becoming a professional screenwriter is truly a lifestyle that takes thousands of hours of planning, writing, meeting and selling, over years and years of bridge building, if it’s to be truly successful. And a good rep, whether it’s an entertainment attorney or literary agent or manager, should have a shared idea of the goals each party possesses.

For example, every one of my clients has a strategy. We discuss which creative opportunities to pursue and what we need to do to effectively vet the moment. Sometimes that’s by coincidence and sometimes it’s by calculated creative decisions. And sometimes, it’s both. I love the idea of, “At the crossroads of preparedness and luck, you’ll find success.” But as the industry of screenwriting has evolved, with all of the inner politics and shifts in markets, finances and business models, it’s a massively challenging career endeavor.

While the rewards can be significant, the greater likelihood is that the sacrifice may not be worth the payoff based on the time and energy invested. That’s how difficult a screenwriting career is. Difficult but not impossible. So how that all comes full circle is simple. If you’re a truly dedicated screenwriter with a real vision and voice, regardless of medium, you’re on the right path.

Write screenplays both for yourself and for the film and TV industry. It’s not the kind of industry that can be approached with a casual interest. You have to be all-in. That’s the first step to landing a manager. Once you have endured the grit, persistence and determination, you’re ready for a shot at success. 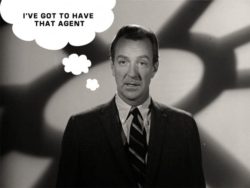 The next step is to be prolific and strategic with your writing, whether it be for film or TV. Selling screenplays and setting them up at film production companies is a different process to selling TV pilot scripts.

The market is like the rising and receding tide of the Pacific. Here’s where we are at the moment. At least this applies to the last few years… If you’re a writer with credits, good relationships, great samples and a solid polish and strategy, it’s easier to pitch TV. But to get there, that’s a three to five-year process that probably takes five to seven perfect TV pilot scripts and bibles, assuming a writer can sell one out of three pilots. If you’re uncredited or only have one or two WGA script deals, you need sales and samples for TV.

For features, a spec script is very en vogue. Film is all about packaging. And the best way to package is with a script. You can pitch talent and filmmakers but for producers and buyers, they generally want a script, or at least a very solid twenty-minute breakdown to engage. All of the previous adds up to a simple idea. Finally, here are some mantras that all screenwriters should live by.