Where Tragedy & Joy Are Present At The Same Time

“Musicals Bring You To A Place Where Tragedy & Joy Are Present At The Same Time” Tony Kushner Talks “West Side Story”:

West Side Story draws strong inspiration from Romeo and Juliet, both of which explore themes of loyalty, family, race, class, and falling in love with someone from the other side. Set in the Upper West Side of Manhattan in the 50s, rival gangs the Sharks comprised of Puerto Ricans, and the Jets comprised of light-skinned folks, battle it out for their turf. Originally from a book by Arthur Laurents, Jerome Robbins, Leonard Bernstein, and Stephen Sondheim, wrote one the most enduring musicals in 1957. Almost seventy years later, Steven Spielberg (Ready Player One, The Post) and writer Tony Kushner (Lincoln, Munich) blew the dust off the famed musical and gave it a new lick of paint. Tony Kushner spoke with Creative Screenwriting Magazine about his intention for the intentions for West Side Story, starring Arian DeDose as Maria, Rachel Zegler as Maria, and Ansel Elgort as Tony.

Sadly, the timeless issues which instigated the original in the 1950s such as racism, xenophobia, poverty, and gender are still pervasive in our society in spite of the progress we’ve made over the past decades. “It’s also timely, regrettably so.”

Much like the tragedy of Romeo and Juliet, West Side Story tracks two star-crossed lovers who can never be together despite their love for each other. “It’s a real tragedy, not a really sad musical,” mused Kushner.

Tony Kushner wanted to convey “the birth of something out of destruction. There’s the possibility of new understanding as a result of the blood that’s been spilt although the cost is very high.” The memorable score of West Side Story invokes feeling of love triumphing over hate. “There’s a reason for hope. There’s a feeling of eternity in any great tragedy.”

West Side Story is a story of one city divided into two; two tribes, two families, as well as the two ill-fated lovers. On a deeper level, the issues illustrated in the film highlight the failure of the civic soul of Manhattan to cater to all its citizens. 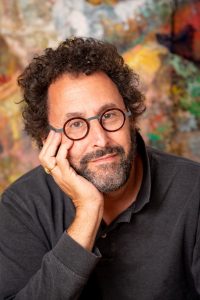 Updating and modernizing a classic story involves walking a delicate balance between honoring the source material and infusing the Kushner/ Spielberg elixir. West Side Story was also made into a film in 1961 which Stephen and Tony watched as part of the development process. “There are moments in our film where we acknowledged things we loved in the original film.”

Given their love of musicals, they weren’t going to stray too far from the original format. “We wouldn’t dream of changing a note of Bernstein’s music or a word of Sondheim’s lyrics, but we did look at the cultural changes over time.”

Team Kushner/ Spielberg also expanded upon things that were alluded to, or not fully explored in Laurents’ novel in their modernisation. “We never thought of it as updating, only expanding.” In some respects, it was truer to the time period because the City was tearing down the neighborhood to construct Lincoln Center which featured in their film.

There were also things that weren’t expressly articulated in the 1950s that are known today. “For instance, Anybodys (Iris Menas) is presented in as a tomboy in the original.” As the years progressed in the collective cultural psyche, the character evolved into one that identifies as male. “We might think of him as the first trans character that appeared in a musical. This captures the fundamentally progressive spirit of West Side Story. We looked at this twentieth century musical with twenty-first century eyes.”

- We honored the original, but also made something new.

The original musical had a different song order. “I was fascinated by choices like the song ‘I Feel Pretty’ sung straight after the rumble.” Blood had been shed, lives had been lost, yet Maria extolls the beauty in the room.

Kushner wanted to turn up the heat for stage audiences after a part of Maria’s life had just died. This sequence appeared in the first act of the original film, but Kushner pushed it into the second act to allow for a longer build-up and a greater dramatic impact. “The original was being careful not to put the audience through too many emotional swings.” The original formats of Westside Story didn’t move audiences so much in the 50s and 60s. After decades in the collective cultural consciousness, Kushner inject some boldness into it. 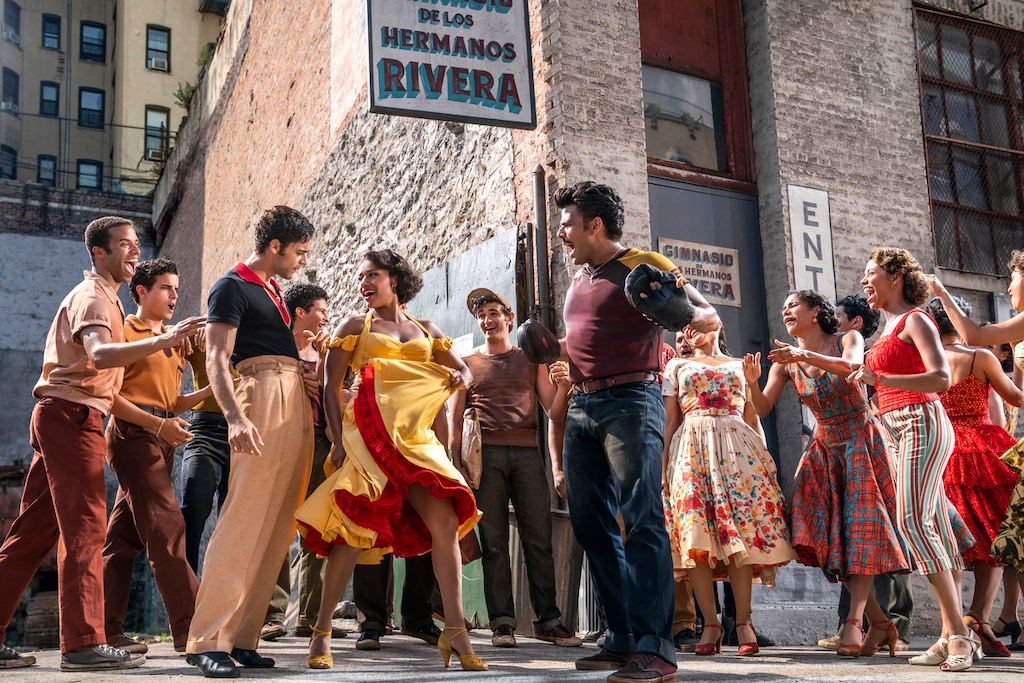 The new version opens with La Borinqueña (The Puerto Rican National Anthem) which wasn’t performed in the original.

Kushner and Spielberg re-arranged some of the overtures to more closely resemble the musical in their vision. “Now that the score was firmly established, we gave ourselves permission to be more adventurous and go back to some of the radical spirit of the original musical.”

The new version added the Valentina (Rita Moreno) character and gave Tony a tougher backstory. Maria was also given a less comfortable home life. “She came to New York and left her father in Puerto Rico.” She also sings an emotional rendition of Somewhere after Tony kills Bernardo. This was sung by Anita in the original film.

Kushner also felt that the character of Doc (Ned Glass) in the 1961 film was more a plot construct than an organic character. “Doc was transformed from an old Jewish man into a Puerto Rican woman who became the character of Valentina.”

Kushner also wanted to further explore the character of Chino (Josh Andrés Rivera), especially after the rumble, so he could see both the Sharks’ and the Jets’ reactions.

They also included more Spanish, much of it without subtitles. The changes were noticeable, but certainly not revisionist.

“This is not your father’s West Side Story, so you need to pay attention,” said Kushner.

Kushner and Spielberg share a special working relationship. They’ve worked together on four projects so they trust each other’s choices and sensibilities. There is also a deep respect. “Every idea that I have Steven elaborates on and makes more complex. I think he’s a storyteller second only to Dickens. He’s in complete control of the narrative.”

Kushner cites the dynamics between Bernardo, Sharks Leader and Maria’s brother (David Alvarez) and Chino, to whom Maria is betrothed before the rumble. The doors are shut and blood is about to be shed. “There’s this moment where Tony’s trying to lift the heavy gate. Chino arrives despite being told not to by Bernardo. Chino helps Tony open the gate and holds it open for Tony to enter.” 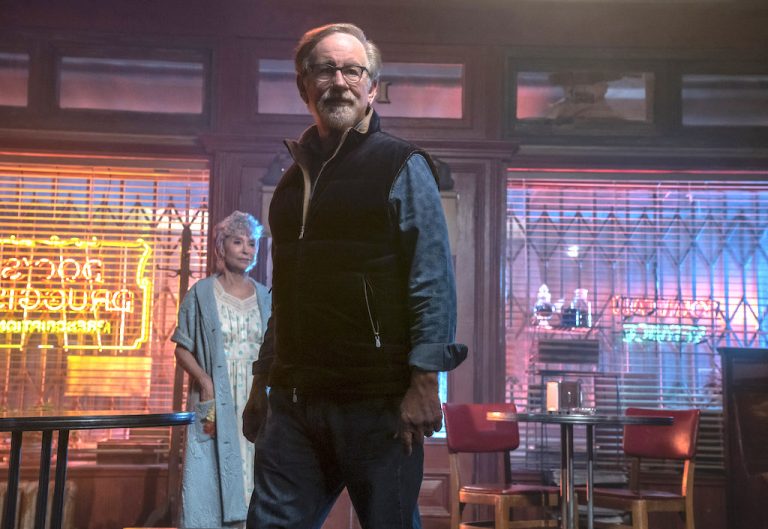 This is a chilling moment when two enemies work together, even acknowledge a kinship. Tony’s about to kill Chino’s best friend, Bernardo, and Chino will eventually kill Tony, so the moment is tense.”This moment highlights a point when things might abruptly go in another direction and turn out differently. That’s what makes a tragedy tragic.”

Steven also shot a ending different to that in Kushner’s script. “I was really unhappy. He let me argue with him at two o’clock in the morning. He made it clear that he knew what he was doing by moving the song ‘Somewhere’ after Bernardo’s death.” There was a romanticized feeling of hope after the tragedy.  “Spielberg held the audience to the harsh truths of West Side Story. Many of the terrible things that occurred have still not been resolved.”

Musicals tell stories in a way that live action can’t. During another musical Kushner wrote, he had the audience in tears. A colleague told him, “That’s not the words, that’s the music.” The post-modernist French talk about “the prison house of language.” Kushner continued, “that the structures of reason are different in music than in words. There’s a hidden part of the heart that’s accessed by music. The music carries you to a unique place that words can’t.“