4 Ways To Create Atmosphere In Your Screenplay

This is the scientific definition of atmosphere – a gas that envelops the earth to protect and contain it. How does this relate to screenwriting? The answer lies in the function of atmosphere and reframing your screenplay as the celestial body. It sets the parameters and limits of your story in terms of genre, themes, character and plot. It structurally defines what the story is and what it isn’t.

Gravity is the force that attracts two bodies to each other – in this case, the story elements. The earth’s gravity is centered by its molten iron core and affected by the moon and other planetary bodies.

The term atmosphere extends beyond the story limits of your screenplay. It is also used to define the mood and tone of your story. These are the non-tangible scaffoldings that reinforce your story by creating a backdrop or setting for the events to take place in. This is not necessarily the location, but more, the accents to those locations.

There are a number of ways to control atmosphere in your screenplay – mainly thorough timing, commonly known as the rhythm or pacing of your story, emotional and mental state and the physical space or locale.

Consider the atmosphere of a classic noir thriller film. It’s typically defined by darkness, shadows, emptiness and extended silence. Although these creative decisions are typically executed by the director, screenwriters should think about how to present these concepts on the page to invoke the desired emotional reaction in the reader beyond what’s being said or where the scene is located.

Let’s examine some common techniques for writers to focus on the atmospheric aspects of their screenplay.

Take a look at the first page of Dan Gilroy’s screenplay for Nightcrawler: 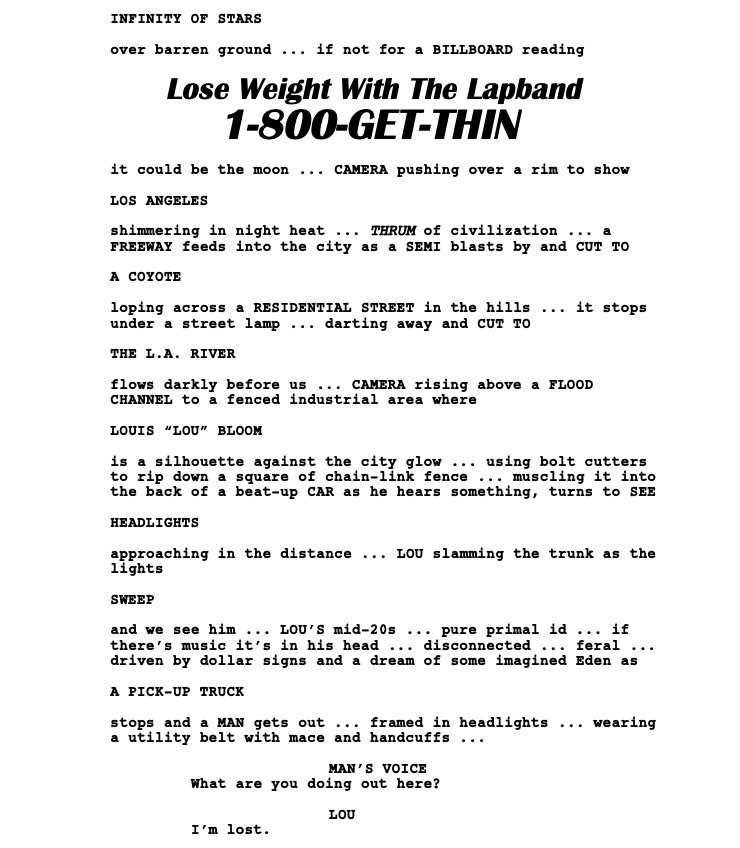 There isn’t a lot happening one hand, but on the other hand, a lot is happening. There is confusion where the opening shots are taken. What does “Infinity Of Stars” mean? The night sky, an observatory, or is it a metaphor? Then we spot a billboard followed by the city scape. The audience has got some of its bearings after a few seconds of cinematic free fall.

Look at the sub-headings – Los Angeles, a coyote, Lou Bloom, headlights, sweep, pick up truck. Typically they are used as locations within a location such as different parts of a house, but not here. They are statements. They focus our attention to get our hearts racing.

The camera is a stalker, an observer, a lurker that could pounce at any minute. Possibly, a participant in Lou’s fate.

The audience is introduced to Lou Bloom (Jake Gyllenhaal) via a sense of creepiness, uneasiness, and impending danger.

The amusing billboard screams in large letters in the screenplay in “that’s so L.A.” font. It’s dark; the sky is mainly lit by starlight. We see a coyote – a resident of Los Angeles considered a untrustworthy trickster, a witch and a predator in some North American tribes. Could it be Lou’s spirit animal or a metaphor for his character?

Lou is in an industrial area waiting for something to happen – an atmosphere of tension and anticipation. He cuts the chain-link fence to enter. This immediately raises questions about his character and his intentions. All this information is presented in the first page and we’re still not done yet.

There are many common locations that inherently create an unsettling atmosphere. They include basements, confined rooms, forests, or big rambling houses away from help if required.

Daylight and Night are distinct times of the day associated with specific types of activity. Someone working on their computer at 11:00 am generates a different atmosphere to someone working at 11:00pm or later. Vampires come out at night. The concept of night and day juxtaposes the underworld and overworld.

Then there are those short-lived extremities of the day such as twilight, sunset, sunrise, and dawn. It’s that murky time when it’s not quite day and not quite night. It’s a time of transition; a time of change. They are associated with sleep, either waking or dozing off and linked to hazy, suggestible, muddled minds. These are short-lived, in-between times that irretrievably link two story elements together. These times of the day have long been used in mythology as the warping of time and harbinger of things to come.

Midnight, and to a lesser extent, midday are critical moments during the day because they bisect it into two parts. Midnight is the witching hour, the becoming (or unbecoming) of a princess, and the start of a new day or era.

These are places character must go to in order to arrive at their destinations. As its name indicates, transit is a temporary time and place. It’s the journey. 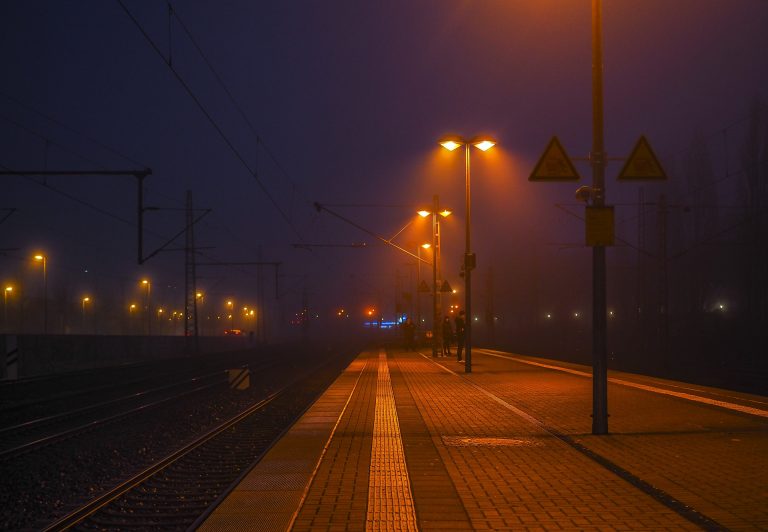 Transit also refers to the holding places such as train and bus stations, airports and other waiting areas. They create an atmosphere of projection and pondering of possibilities and new opportunities as time effectively stands still. It can only resume upon the arrival of a transit vehicle.

Boarding a train, bus, ship or airplane makes these feelings more tangible because they are anchored to common experiences. People are a step closer to their destinations where their goals may or may not be realized.

The next phase is nearing the destination. The excitement is imminent.

Our minds are programmed to associate certain places with specific experiences. A theme park, a resort or sitting at the beach are generally perceived as happy places. Seeing these on screen capture an atmospheric moment without the story needing to progress.

If these places are shifted into a different context their atmosphere changes dramatically. Imagine an abandoned theme park or a barren beach on a sunny day?

Empty spaces that are typically crowded cause confusion, anxiety, and even fear. Why would a major thoroughfare be deserted? These questions challenge our logical minds.

A deserted shopping mall or similar after closing time has a different atmosphere than at lunchtime when there are throngs of people present. Why might there be movement at a mall or a museum at midnight? These questions pique our curiosity.