Award-winning screenwriter Tony McNamara (The Favourite, Cruella) originally told his story of Russian empress Catherine the Great through a stage play format. The play was comprised of two 45-minute parts, with the first focusing on a young Catherine and the second, her older years. Those 90 minutes eventually expanded into the major television series The Great, starring Nicholas Hoult as Peter and Elle Fanning as Catherine, and the series is now headed into its third season.

Full of the wit, dark comedy, and quirky charm that marks all of McNamara’s work, The Great starts off with Catherine’s arrival in Russia and her first meeting with Peter. It follows her through her early days in the palace, her plan to overthrow her obnoxious playboy of a husband and take control of court and country, and the tough attempt to rule that follows. The series earned McNamara two consecutive Writers Guild Awards for Episodic Comedy and its second season ending promises another bawdy round of tomfoolery steeped in satire and timely political commentary to come. 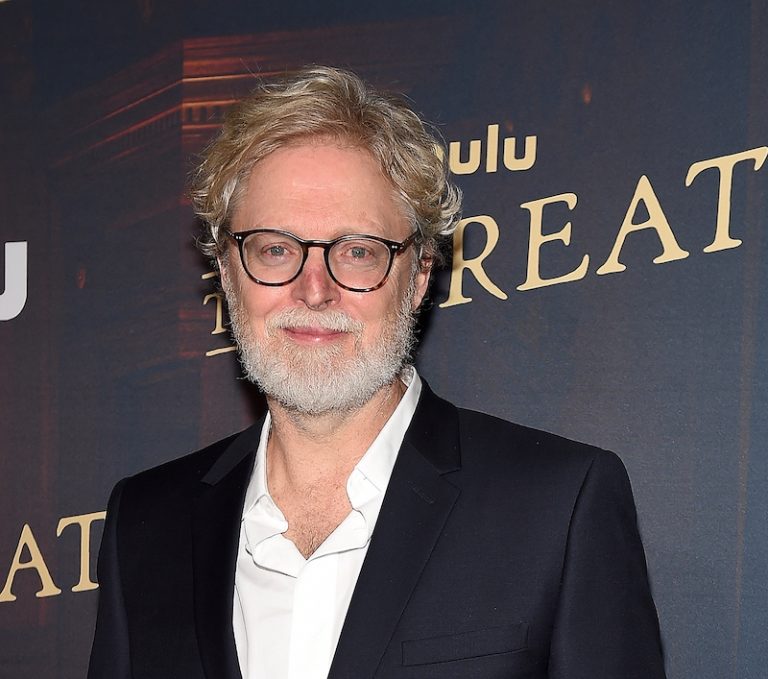 I spoke with McNamara about the continued expansion of his original project, the character progression from season to season, and the opportunities that real-life history offers for the more ridiculous side of comedy.

It’s one thing to develop a play into a movie or limited series – but you’re now about to embark on Season 3 and 30 episodes. Was the original plan to end the show after a shorter run?

It was always the plan for it to be longer, and it always felt like it would be longer – Catherine is trying to take over a country and then run that country. So the story had “legs”; they seemed like good characters in the play and then I added a lot more to the TV show. A good six or seven of the television cast didn’t originally have roles in the play.

From there, I think it was just a matter of keeping on with the characters, finding new situations that challenge them and continue to enlarge the show.

Are all of your secondary characters historical or fictional?

They are basically all fictional, except for Catherine. They’re all made up, even Peter, really. The story is about her and it’s about my version of her. I didn’t want to get into the detail of who she was actually dealing with, I just wanted to use what she did and create the story around it.

How does each season renewal affect your approach to research?

We do a lot of research each season – each season is about a different evolution of Catherine. We research the era around her because we know a fair bit about her now. So we will research the era instead and certain aspects of it. Sometimes we’ll research contemporary things that we think are resonant with her. And then we just organically go from there. As we come up with the story, we’ll think about things like “what was contraception like then” or “what did they do for fun” or “who were the good singers there”…”what was divorce” and so on.

Tell me about your character progression, particularly with secondary characters who now have to take a more central role with upcoming seasons.

What’s great about our show is that we cast a really incredible ensemble of actors who can carry a lot of story and a lot of comedy and drama. Characters like Velementov (the general), who Doug Hodge plays…he’s a great character. He’s an older man and his story is about how he can end his life feeling like he meant something, feeling like he achieved what he wanted to. He’s feeling his age and his disappointment in himself… and his sort of mild alcoholism! So it’s a matter of asking “what is he in our story?” Or, as another example, “what is Elizabeth (Peter’s aunt, played by Belinda Bromilow) in our story?” This woman who loved Peter the Great and now is obsessed with her love for these two people, Catherine and Peter. Who is she loyal to? We also deal with her own aspect of herself, which is political player, and how she metabolizes being a very maternal person with also being a sort of savage politician. 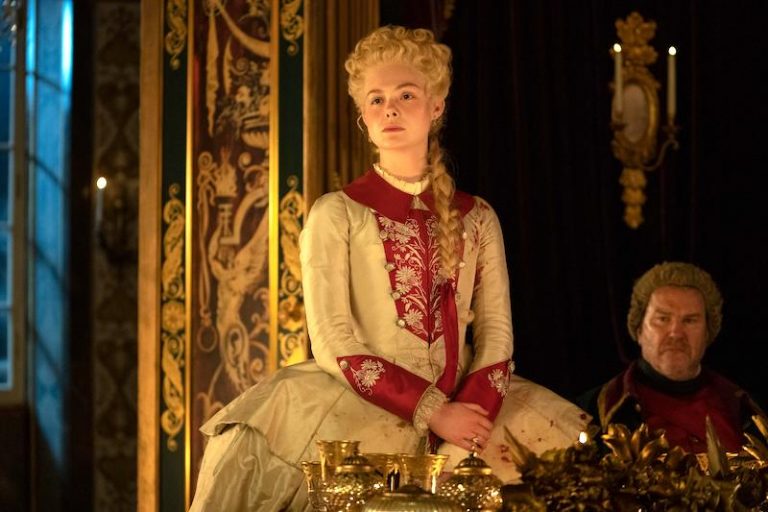 A recurring descriptor of the show’s material is “irreverent” – not in a negative context at all, but just as way to describe this very specific form of comedy. Is that an accurate term?

I guess as someone who went to Catholic school for 13 years, I’ll take “irreverent”! But I think so – I assume it means it’s funny and it doesn’t take itself too seriously… and that it breaks rules. Which is what we try to do.

Are there confines or rules to this genre or is it more “free”?

I think I always approach it as if there are no boundaries for us – and then we see if we can find them afterwards. Sometimes we do find them. It’s usually me, going too far, and then sensible people in the writers’ room saying “Really?”

But I think that’s what I like about the show, and it’s why I like the period aspect of it – it does release us to do more and push the boundaries a little bit in terms of character and comedy. It makes it fun for us to write.

It’s interesting because some of the more “ridiculous” scenes seem like they could be close to the reality of the time, such as when Catherine is giving birth in an auditorium full of people and they are literally eating popcorn while they watch!

That’s the thing about it. People ask if elements of the show are accurate. A lot of the stuff that is the weirdest is accurate. It’s not like it happened to her specifically, because it didn’t – but in Europe at the time, there were a queen or two who had to give birth in front of everyone to prove that the baby was the actual heir to the throne and that the child hadn’t been switched with another.

So would you say that history actually lends itself to this type of comedy? That it opens the door and we get to walk through it? 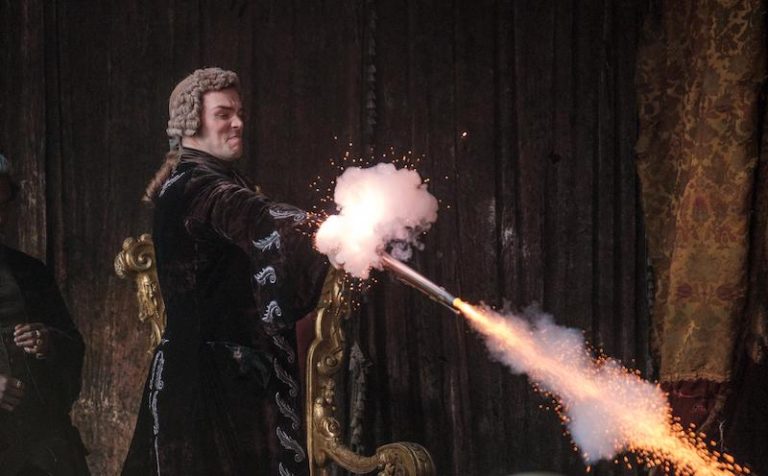 In Season 1, you described the tone of the show as “a black comedy with a dash of satire”. Does that still hold true, or has it evolved over the past two years?

I think it is also a strongly narrative drama in a way. I think I always consider it to be a drama in form; it’s a drama that we execute as a comedy. I structure the whole thing as if it’s a drama and then I make choices that I think will make it funny… but that will still give us an emotional line at the end of the season, so that you feel that Catherine went on a journey and it was hard and it cost her. So that you feel like it’s also a show that’s emotional at times.

Heading into Season 3, are there themes that you would like to explore that differ from the ones you focused on in Season 1?

I think marriage is still the big one! But I also think there’s something in this season that’s about people having agency in their lives and politicians having agency over their lives. And the conflict between trying to make progress and how much you can control that – and still, how hard that is. In the end, Catherine is, in a way, a person who has a country at her whim. Will the country eventually think that is a good idea or not?

What specifically do you like about writing a story that takes place in this time period?

I think I like it because it is where the enlightenment hits the beginnings of democracy and the beginnings of our more democratic societies. Catherine did cross the War of Independence. She was trying to be a progressive monarch but she was also trying to be a monarch in an age where people were questioning monarchy. I feel like that’s an interesting thing at this point in our evolution of societies where everyone’s suddenly questioning democracy and whether it can hold together or if it’s the best way forward. So I think that’s interesting for us to write about in a satiric way and in a kind of political way as well.

What role does politics play in your writing?

I’m very interested in politics – it’s been a big thing for me and something I’ve been most fascinated by all my life. I like it because it frames our society and I like it in our show because it takes the show out of just being about court intrigue or soapy love…it’s about people trying to change their world. And that seems like good stakes for a show.

You have recurring partnerships with both cast and crew in several of your projects. Is the key to success in this specific style finding people who have a similar vision to yours?

I think so – yeah, in a way. I think it’s the key to happiness! Because you’re working with people who get what you’re trying to do – like a Yorgos (Lanthimos) or an Emma (Stone). It’s just meeting people, people on the show like Elle and Nick, who have a similar aesthetic to you. They’re all trying to do something that’s “funny different” or they’re interested in things that are funny in a certain way. So it’s fun to work with those people who are immensely talented and you feel like you have something to offer them.