Fighting Words: The Anatomy of a Fight Scene

Your protagonist is exhausted, having fought through an entire feature screenplay of obstacles and hardships. The difficult road’s led them to a cavernous warehouse with a hole in the ceiling, the moon shining down like a spotlight. Standing before the flames creeping up the walls is the character responsible for disrupting the protagonist’s tranquil world. Their journey has led them here, to this moment — to the final showdown with their antagonist!

The two characters maintain a relatively safe distance, circling each other while delivering witty one liners. The time for talk is over. They each feint an attack, psyching each other out. It’s then that they simultaneously realize neither of them has actually been in a real fight — and one of them will have to swing first.

How should you approach a fight scene if you don’t have practical experience? How can you translate the art of hand to hand combat to the page? Let’s take a look at some examples from writers who can really pack a punch (I had to).

During your rewrites, do a thesaurus pass and replace common words to better fit your fighting style. Punch up (I really can’t help it) your words with replacements that phonetically illustrate the intensity you want to exhibit.

If you’re going for a more gritty atmosphere like Netflix’s The Punisher or Oldboy, then your writing should reflect that with brutal imagery and harsh word choice.

Check out the brutal hammer scene in the American remake of Oldboy written by Mark Protosevich and his word choice:

Words like brutes, lashes, and pummel really accentuate the brutality of this reimagining of this legendary scene.

If you have a more stylized world in mind like Crouching Tiger, Hidden Dragon, then your language should be as lofty and acrobatic as your fighters.

The Umbrella Academy by Gerard Way & Gabriel Ba is a comic book adaptation that maintains the original source material’s sense of humor and flair, so it’s only right that the fight scenes mirror that tone. 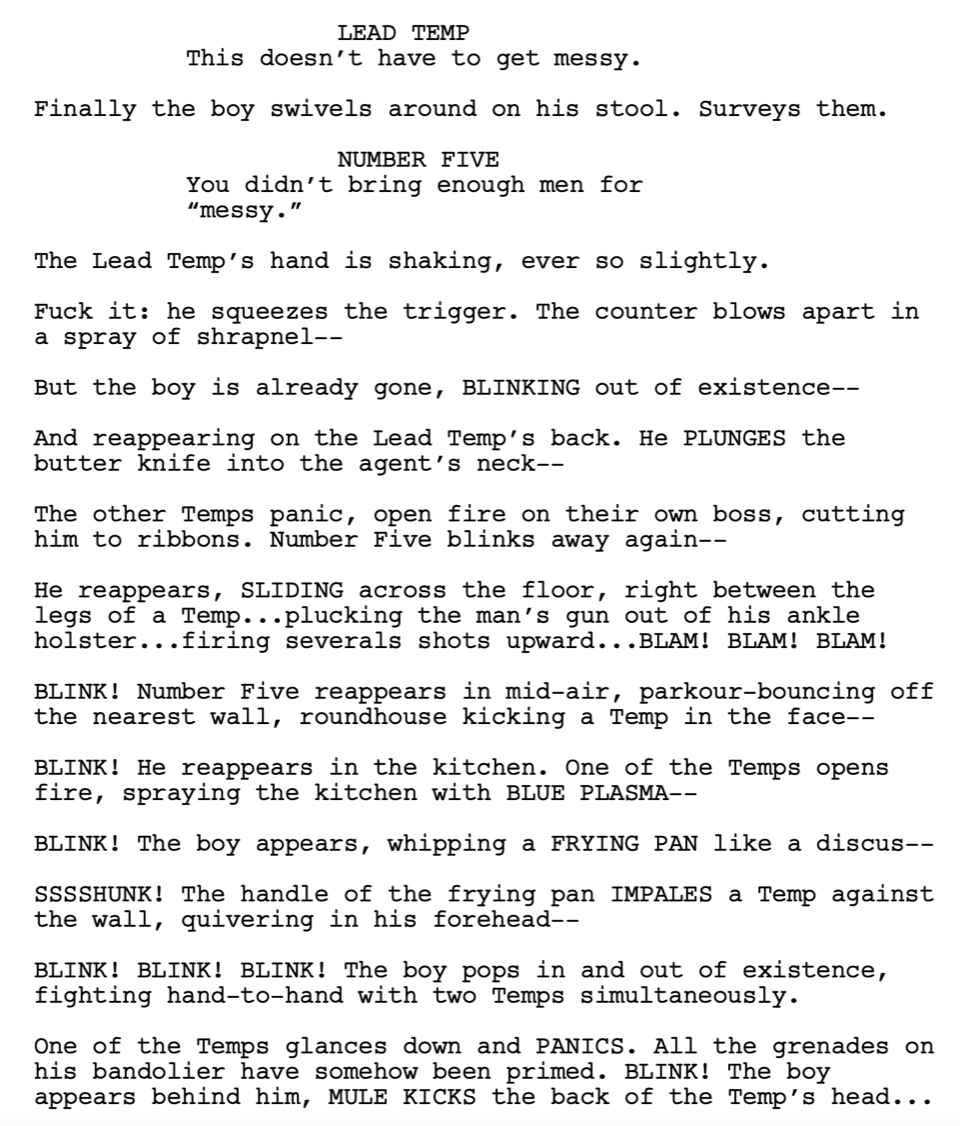 Different kinds of fights occur at different points in a story. When and where they occur will tell you a lot about the type of fight, the outcome, the stakes, and the ramifications for your protagonist.

Generally speaking, fights that occur early in the script are often one sided at the hands of the antagonist. The protagonist isn’t equipped with the skills or training to defeat them, or perhaps they are absent to defend their loved ones. Either way, their world is changed and they are called to action.

This first fight is usually a chance to show the strength and formidability of the antagonist as an almost unbeatable foe. It’s up to the protagonist and her/his supporting characters to learn how to defeat them, but that often comes after several failed attempts.

The second showdown often occurs in the second act as a series of lesser tests to help prepare the protagonist for the final showdown. This is a great time for the protagonist to face off against the antagonist’s henchmen in an effort of offense, or a failed attempt to protect a MacGuffin that the antagonist is after in order to attain god-like power.

The antagonist secures the MacGuffin, and the protagonist fails to stop them, but they succeed in learning a valuable lesson that they can use later on.

A third fight often knocks the protagonist down for the count and they reach their lowest point. They then have to recover, learn to turn their flaw into a strength by embracing a new skill or knowledge, and train for their final showdown. Think of Bane breaking Batman’s back on a bent knee. Bruce Wayne then must face his darkest moment and literally lift himself out of a deep, dark hole.

Tony Gilroy stresses the importance of knowing the physical location in action sequences, and the same is true for fight scenes. Map out the characters’ surroundings before they enter the ring.

What are the rules of their world? Are weapons available in the background? Can they use any part of the terrain to their advantage or disadvantage? Is there a root that will trip them and nearly cost them their head? Does the protagonist have their back against a cliff?

Fully flesh out and set the stage for the fight in order to optimize the location and make it a part of the action. The characters shouldn’t simply react to their opponent’s strikes, but the environment around them as well.

A fight in a film isn’t just something that randomly happens. Every fight is intricately linked to the main character’s main motivation, flaw, and story engine.

If you look at this example from Taken written by Luc Besson & Robert Mark Kamen, you’ll see the desperation in Bryan’s fight. He’s finally found the location of his kidnapped daughter and nothing is going to stop him from getting to her. 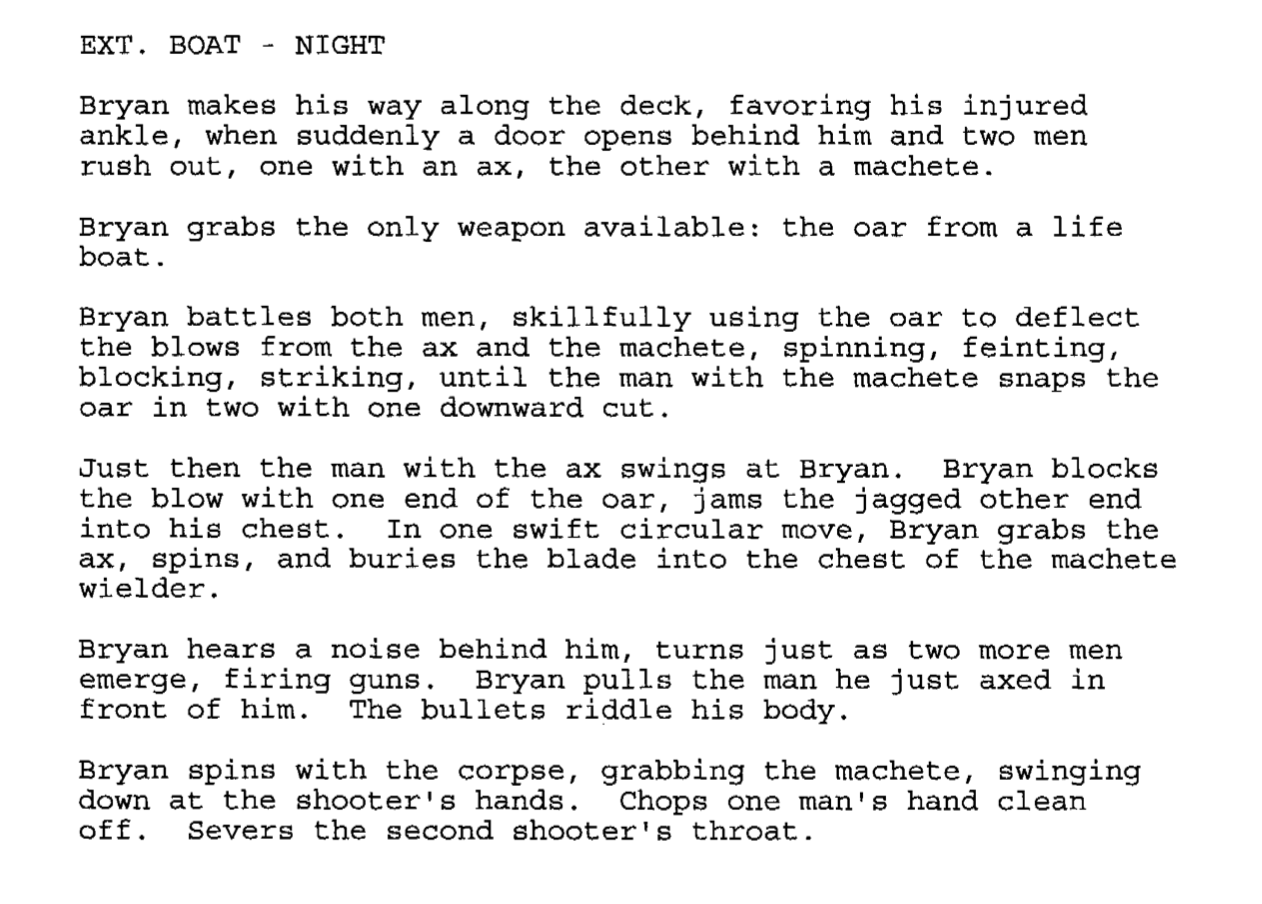 Prior to this, Bryan attained information on the location of his daughter through torture, he raced a car through busy city streets, and jumped off a bridge in order to land on this boat. Nothing is going to stop him. Here we also see Bryan use a prop from the location as a weapon. He’s honed in and focused on saving his daughter by all means.

The Phases of a Fight

Sometimes you have to throw a sucker punch in there to keep the audience on their toes, but for the most part there is a build up of tension before an otherwise good protagonist resorts to violence in order to defend themselves or others. A line has to be crossed.

Building tension before the fight is a great way of sucking a viewer into the action. Think of the loudmouth egging on two reluctant school children after school, the greater the agitation the more an audience leans in expecting the first blow.

A perfect example of great tension building prior to a fight is the scene in Raid 2: Berandal when Rama is locked in a bathroom stall. There is an angry horde of assailants on the other side of the door. Both Rama and the audience know that the flimsy lock won’t hold for long, so they both embrace for the inevitable. The impending doom prepares one for the dopamine rush on the other side of the door.

Once the characters engage in physical combat, they’ll both deliver heavy blows at an equal rate. The protagonist will land some hits and also get hit in a seesaw exchange of jabs and hooks.

The protagonist usually gets the upper hand and victory seems in reach, until the antagonist uses a dirty trick or connects on a desperate Hail Mary swing. Check out this moment in Creed written by Ryan Coogler and Aaron Covington when Adonis is knocked down in the final bout. 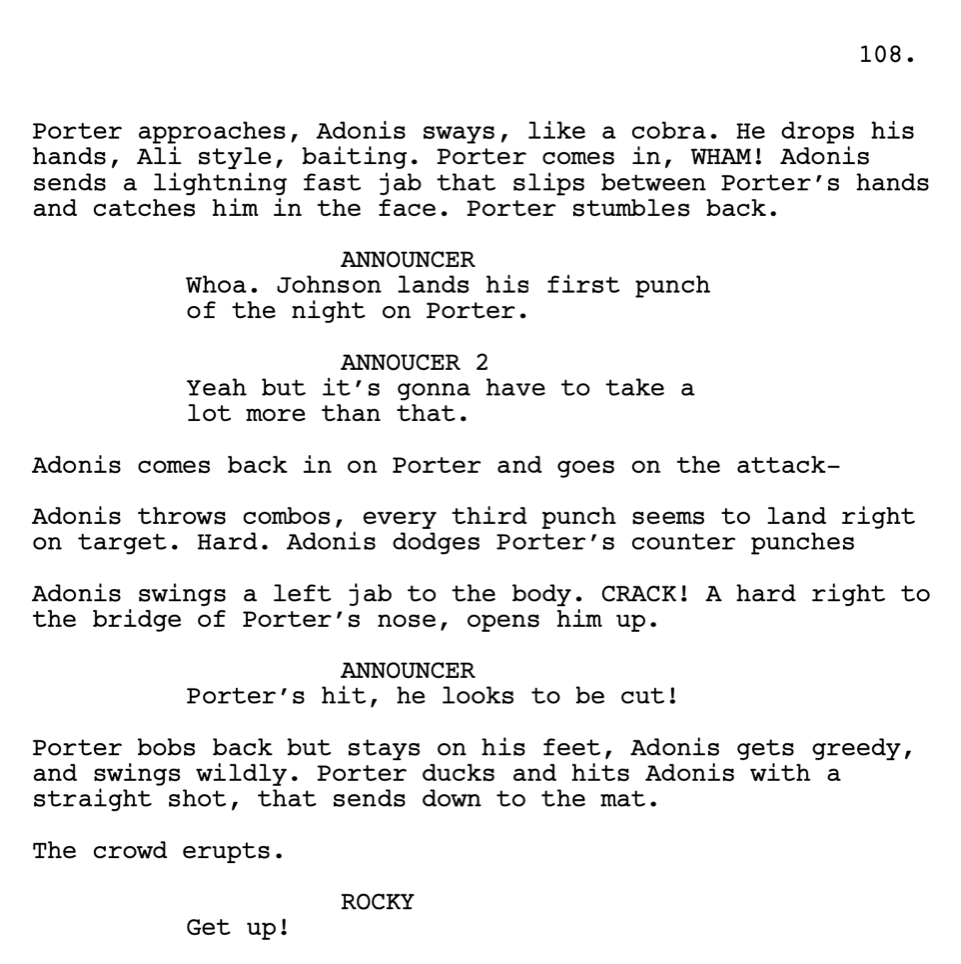 This is where the protagonist must summon all their strength and make a glorious comeback. They summon their inner strength like Jean Claude Van Damme in Bloodsport, written by Sheldon Lettich and Christopher Cosby & Mel Friedman.

The protagonist often uses something they’ve learned in training or through failure in order to overcome the one obstacle they’ve had trouble with since the first act.

This is also seen in The Karate Kid when Daniel LaRusso channels his inner strength through his training to deliver a crane kick to Johnny Lawrence’s jaw.

If you look at all of the examples shown above you’ll notice that for the most part they are comprised of blocks of action lines instead of quick one sentence paragraphs.

Think of each block of action as a sequence of engagement like a boxing match. When the boxers come together, they become a single mass of jabs, hooks, and undercuts. Then they separate.

Use line spacing to indicate breaks in the fighting or a shift in focus. Separating the action is a good way to bring extra attention to a particular object or movement. 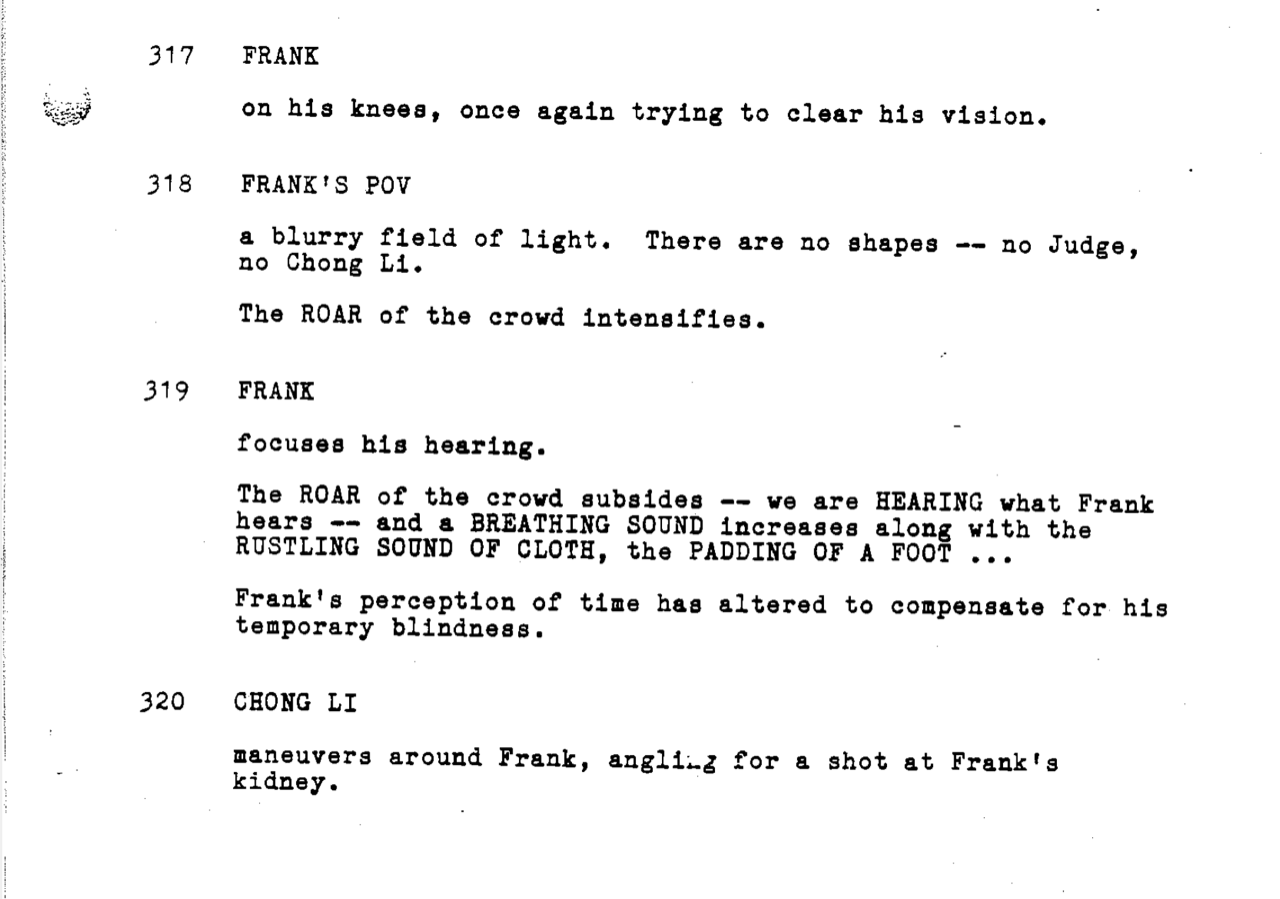 You can also capitalize key words for emphasis on important details so that the object or action doesn’t get lost in the scuffle.

Writing fight scenes can be a whole lot of fun. Don’t worry about getting bogged down on the details in the first draft, just go wild and clean up the action on the rewrite. Even for those of us who never took a punch to the nose or stood up to our bullies, we have access to creating massive damage on the page with our imaginations.

As with any martial art, practice, technique, and ritual will make you a stronger fighter — and a better writer.