Dexter, our favourite serial killer (how can you hate that face?) had a good run over eight seasons from 2006-2013. Adapted from the novel Darkly Dreaming Dexter by Jeff Lindsay, avid viewers tuned in each week to feed their serial killer proclivities in the safety of their own homes. Dexter only killed people who deserved it, he was smart, funny, a good husband and dad. So the audience spared him judgment.

Then the series came to its natural end. A hurricane was approaching Miami. Dexter (Michael C. Hall) struggled between fleeing with Hannah (Yvonne Strahovski) and his son Harrison (Jason Wells) to avoid capture or meting out justice to the evil Saxon (Darri Ingolfsson) while sister Debra (Jennifer Carpenter) was a sitting duck in the hospital unaware of her grisly fate. 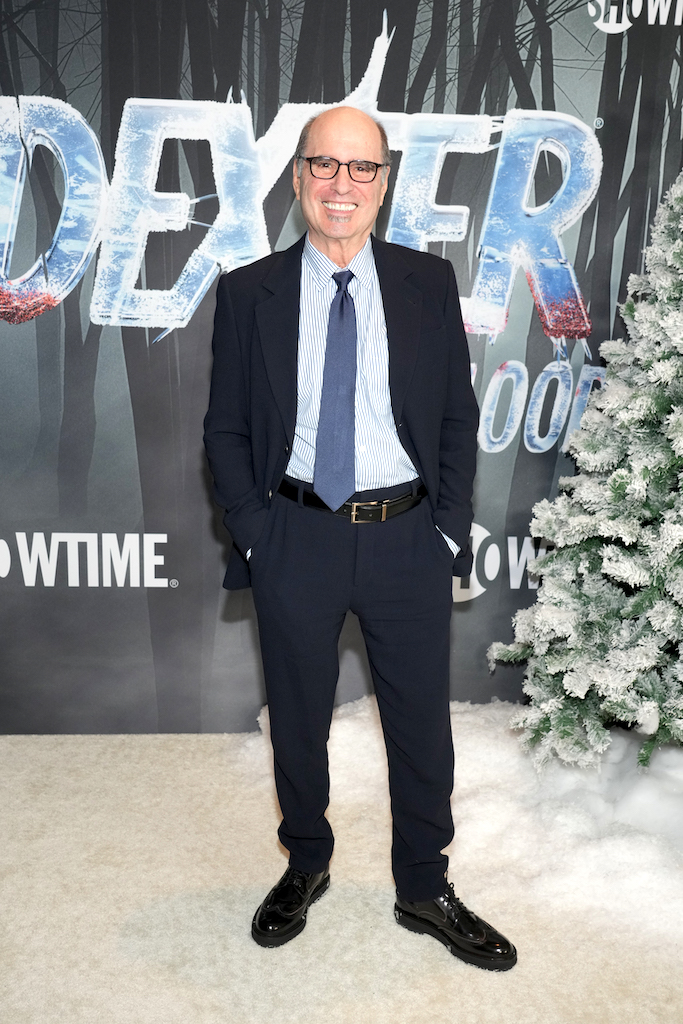 The hurricane struck, Dexter faked his death and started again working in a lumberyard in Oregon as Jim Lindsay (unrelated to the author of the novel.) His goal was to remain as inconspicuous as possible and live a life of austerity.

A large chunk of Dexter’s audience wasn’t satisfied after being mislead that he was dead, so Dexter: New Blood was produced in an apparent move to redeem itself. Of course, it wasn’t that simple. Almost a decade had passed and Michael C. Hall was ready to reprise his Emmy award-winning role.

Creative Screenwriting Magazine spoke with showrunner/writer Clyde Phillips (Nurse Jackie) who worked on the first four seasons of Dexter and brought New Blood to the screen with a fresh new attitude.

“Dexter was so successful because it had a unique anti-hero premise in the era of Breaking Bad and Mad Men,” began Phillips. It was a time of complicated bad guys that won. They were deeply-layered complicated characters which warped the morality continuum because the bad guys took down the badder guys. “Voiceover was the main reason audiences invited a serial killer into their homes every Sunday night,” pondered Clyde. It was a signature element of the show which really allowed the audience to understand Dexter.

- Voiceover allowed us to know what a psychopath thought and felt in ways he could not express.

The voiceovers demonstrated that Dexter could not control his urges. “It showed his vulnerabilities which made him likeable,” Clyde continued. Flourishes of ‘humanistic’ behaviors allowed for humor and made the audience “somewhat complicit” in enabling him. The humor was often firmly tongue in cheek with many laugh our loud moments.

Dexter operated with a strict code – only kill the bad guys, don’t get caught, and clean up thoroughly after yourself. As the show progressed into later seasons, this code was diluted. This may be the result of the show running out of narrative juice. All the Dexter stories had been told and it struggled to forge new story terrain.

Clyde Phillips conducted extensive research into psychopathy to make Dexter’s character as authentic as possible. “Psychopaths are narcissists and lack empathy,” he stated. Dexter has feelings and emotions, but in a vastly diminished capacity. “It was a constant struggle for Dexter to fein normality and avoid capture. Dexter learned to mimic humans by closely observing them.”

Dexter: New Blood took almost ten years to make it to the screen following the end of the TV series. Despite the audience backlash, it was Michael C. Hall and Gary Levine from Showtime who felt the time was right for more Dexter. Phillips came up with a thirty-minute pitch for New Blood which was adamantly not Dexter season 9. Phillips honored the passage of time and the father-son relationship between Dexter and Harrison in Iron Lake took center stage. Dexter also got romantically involved, ironically with the Chief Of Police. Phillips stitched together a TV writers’ room via zoom during the pandemic and a new series was born.

“We wanted the newly minted Jim (formerly Dexter) to live the most monastic, abstinent life in a small town,” added Clyde. Jim hadn’t killed in almost a decade, but the “dark passage” still lived within him. “He was always tempted to kill.” He knew he could never extinguish his impulses. Then Matt Caldwell (Steve M. Roberston) came along which rekindled Jim’s killer instincts in the first episode of New Blood.

As Jim grew older he realized that a lot of people around him died – both good and bad. “He realized he needed to tamp down his activities.” Another change in the series is that Harrison (Jack Alcott) now prominently features in his life and Jim wants to be a good father to him. This raises questions about Harrison’s killing sensibilities. “Does he have the ‘demon’ inside him? Is there an inherited trauma? Harrison found Dexter in a shipping container in his mother’s blood.” As the season progresses, we  learn that Harrison does have some of his father’s impulses – referred to as the “demon” rather Dexter’s “dark passage.” 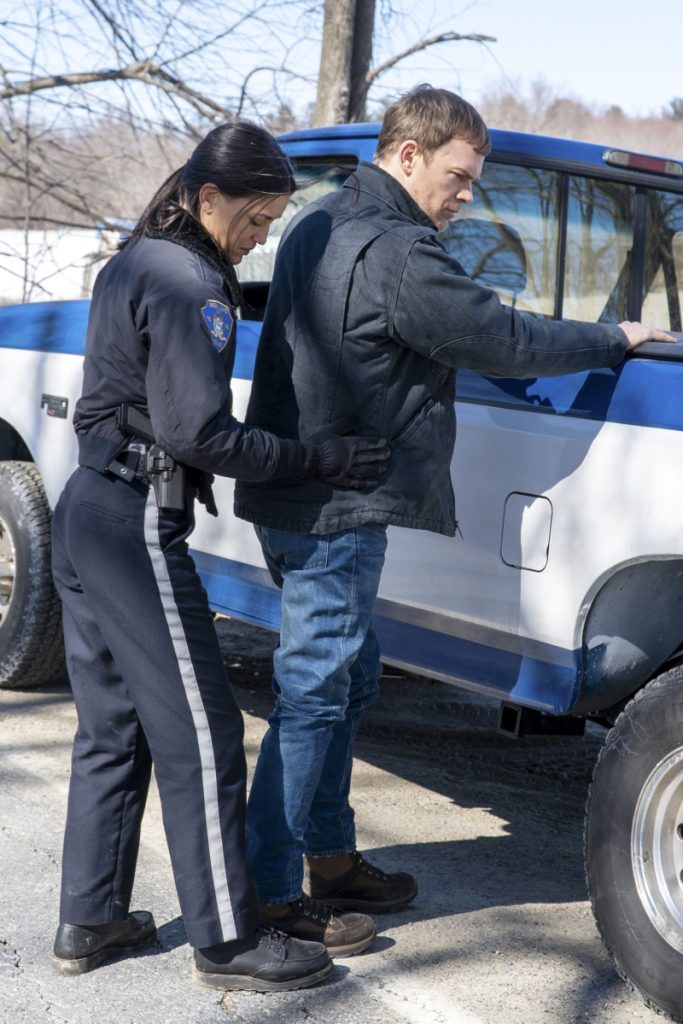 Jim still lives with the same killing code when it’s business as usual after Matt Caldwell becomes a target. He’s extremely deft at not getting caught. “He gets outsmarted for a minute by his Chief Of Police girlfriend Angela (Julia Jones) but gets away. He doesn’t outsmart his own son. Harrison is the only person that true understands him.”

Jim does experience more human emotions by the series end as he more closely resembles a functional human being. He exclaimed, “I’ve never felt love before until now,” as Harrison holds a rifle towards him. On a more perverse note, Jim is somewhat elated that Harrison has inherited some of his urges.

Jim has to ensure his son fully comprehended the killing code and that “every person who wound up on the table is worthy of that fate.” Harrison teaches his father that “perhaps you can have a greater sense of honesty, humanity… and maybe even fun during this dark passage.” Harrison is not as far gone as Jim and provides a glimmer of hope that his dad may lead a normal life. The final episode titled Sins Of The Father deals with their fate.

It answers the central question of the series, “Can you avoid or defeat fate?” Clyde Phillips declared that you cannot. Jim kills again in the first episode. “Writing it felt like slipping into a pair of comfortable shows.” He also dies in the final episode.

New Blood ends with a satisfying conclusion and a sense of justice. Jim/ Dexter is really dead this time and will not appear under an assumed name in a decade’s time. If New Blood continues into another season, it’s up to Harrison to carry on the family business. “He’s fated to kill, but not driven by the same demons as his father.“