Although Oscar-winning screenwriter Julian Fellowes has carved a place for himself in screenwriting circles for writing rich, character-based dramas, he certainly doesn’t want to be typecast.  “Although I’ve become the ‘go to’ guy for  period drama I’m very happy writing contemporary drama too,” he asserted. In fact, his personal favorite screenplay he’s written is Separate Lies, based on the novel A Way Through The Wood by Nigel Balchin. “I’m not inexorably bound to a corset to period drama.” 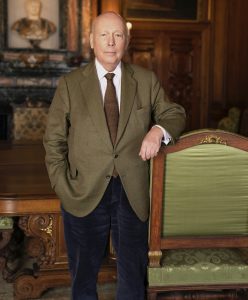 Fellowes knows what his audience wants and expects from him, so he delivers a reliable stream of historical drama. He sometimes takes a guilty pleasure in not satisfying audience expectations and writing something fun and frivolous like School Of Rock (the British version.)

Currently, Julian Fellowes has delighted global audiences with Downton Abbey: A New Era and The Gilded Age. “The Gilded Age was a departure for me in a different way because it wasn’t set in England. It was about America in a particularly unique period in its history where old money and culture clashed with the new.”

The screenwriter described The Gilded Age as the period after the Civil War in the late 19th century and the turn of the century. “America was beginning to feel its own muscles and get ready to dominate the twentieth century as a global superpower.” Julian was already researching the period out of historical interest before deciding there was a television series in it.

Why Is Historical Drama So Popular?

Much like Bridgerton, stories set decades before most of us were born continue to draw significant loyal audiences. There is more to their allure than their lavish costumes and stately homes.

“It was a very handsome period – the houses, the clothes, the meals and the etiquette,” quipped Fellowes. “In the old days, the entertainment industry considered glamor as a basic requirement of cinema and period pieces play into that.”

Aside from the glorious aesthetics of the era, “there was a sense that those societies were far more secure and predictable than our own today. Everyone knew what to do, what to say, what to wear, and where to go. There was no casual chic of spontaneity.” Despite our current disinclination to live under such strictly regimented rules in today’s society, audiences enjoy experiencing them for a few hours.

In order to make historical drama more contemporary, Fellowes creates characters “with problems that aren’t exclusively from their own era.” He does so by making their problems more general and transferrable to modern times. “I’ve lost my money, I’m pregnant (congratulations!), I’ve got a fatal disease, my son hates me, or, who is this ghastly man my daughter wants to marry?” These narratives must be both dramatic and entertaining.

Julian Fellowes is meticulous with his sense of world-building. He was born in Cairo, Egypt and was driven by his curiosity and relatives in England. “I was interested in my family and my heritage country at a very young age.” He had the fortune of being close to his great aunts who were born during the late nineteenth century. Fellowes often questioned her about the specifics of life at that time. “She went out on a fishing trip to India to find a husband. Her uncle was the Governor of Bombay.” Sure enough, these tales found their way into his writing. The character of Constance Trentham (played by Maggie Smith) in Gosford Park was inspired by one of his aunts and Robert Crawley, Earl Of Grantham (Hugh Bonneville) was based on his father.

He saw beyond the bustles and crinolines and realized that they were ordinary people going about their daily lives “with as little damage and as much profit as possible.” This was his particular take on history.

In creating Downton Abbey and The Gilded Age, he had harnessed his own reading and his research team to identify specific events of the time. Then, he’d work out ways to dramatize them.

Julian traverses a range of themes both in his world-building and character studies. These include race, class, and wealth. During his youth in the sixties, social class was declared defunct. But deep down, Fellowes realized we wouldn’t fully achieve a classless society. “I’ve seen how class can shape and break you. Class can ruin relationships, impose expectations you have difficulty meeting.” Fellowes found the concept of class deeply fascinating. He added that he was the product of an unequal marriage in terms his parents’ backgrounds. His father’s family came from the gentry and his mother’s didn’t. Consequently, his father’s family didn’t approve of the marriage and constantly belittled her worth and questioned her motives. This personal experience infused itself into Julian’s work.

The writer also realized that both a lack and abundance of money changes people – another common theme in Fellowes’ work. “People have a response to money that dulls their authenticity.”

A key difference is the relative lack of self-made millionaires prior to The Golden Age. People were generally born or strategically married into wealth. “This often made them believe they were more intelligent and funnier than everyone else,” because they were surrounded by enablers.


While he was researching The Gilded Age, Fellowes read a book titled Black Gotham by Carla L. Peterson based on her family in New York. “She described this prosperous Black Bourgeoisie. Her great grandfather owned a successful string of drugstores.” This is where he decided upon the idea of Arthur Scott (John Douglas Thompson) owning drugstores in the show. A prosperous black America was an eye-opener for Julian since his existing narrative was restricted to Jim Crow style policies on the plight of America’s black community. Despite the Reconstruction and the promise of everyone being free and equal in America, Carla Peterson wrote about the endemic racism against Black Americans. It was part of daily life. As Peggy Scott (Denée Benton) says in The Gilded Age, “What kind of appetite do you have for a fight? Are you going to have a fight every time you try to catch a cab or asked to step aside? That daily endless slight is something many people are unaware of. They think of racism in terms of horrible violence.” 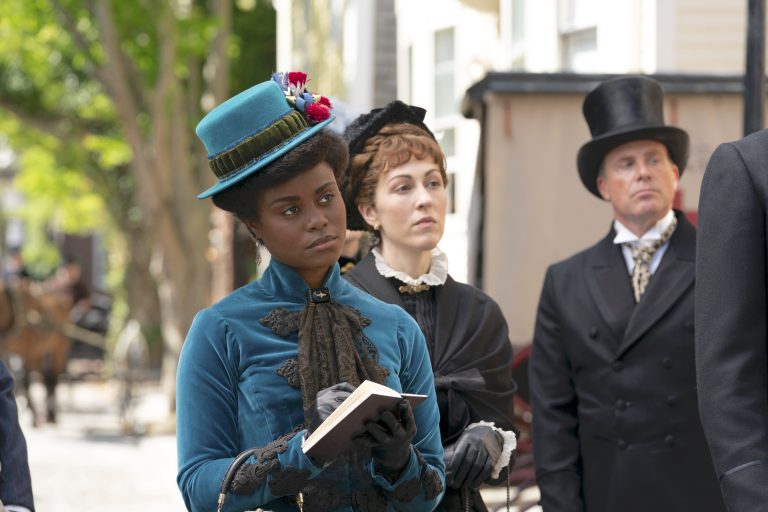 Julian Fellowes likens these microagressions to the anti-Semitism he experienced. How do you deal with that? Do you react every time it happens? “I hope people might examine their own prejudices about people who have done nothing wrong. Over the course of the series, I’d like people to become interested in someone they may have assumed no previous interest in. They may even get to like them.”

Julian Fellowes generally writes his own scripts. He rarely uses a traditional TV writers’ room like most television writers. “My wife Emma is the first script editor with Downton Abbey… ‘This is great. This is boring. This isn’t clear. I didn’t realize she was his sister.’ Then he would receive notes from the producers. Then it would proceed to being read by network or studio executives.

He also stated that he co-wrote The Gilded Age with Sonja Warfield which really complimented his writing. They wrote alternate episodes and gave each other feedback. Then Julian did a final pass on each script to harmonize the tone and voice of the series. Fellowes sees this process as the way forward for his writing. He noted that he prefers a writing partner like Sonja Warfield rather than the collective mind of a TV writers’ room where many people are constantly contributing ideas. “In Britain you typically get notes from about three people. In America, it’s a lot more.”

Julian Fellowes has to keep track of many characters in each script. “I start with certain characters for specific dramatic purposes. I like contrasting characters.” He doesn’t always strictly define each character’s purpose and sometimes allows them to be surrounded by mystery. Not being too rigid allows him to add variety to an episode.

Like many writers, he borrows from people you’ve known for each character. “Writers don’t make much up. They’re not portraits. You take the dynamic.” 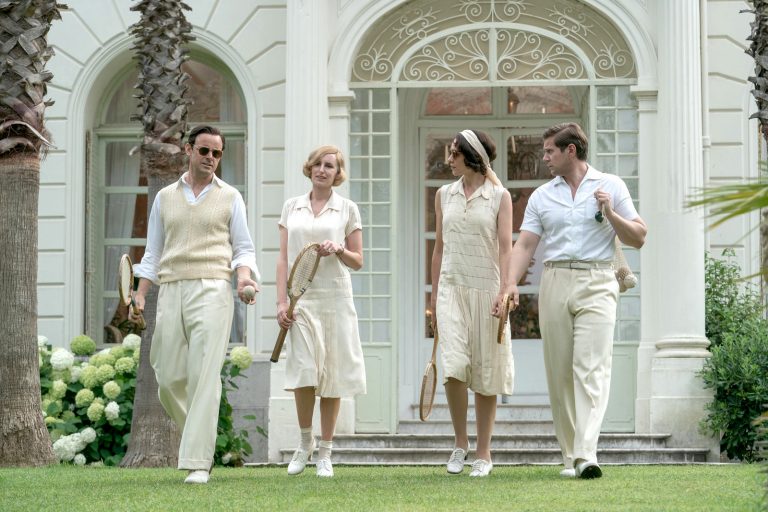 Many of Fellowes characters often play the hand that is dealt to them – good or bad. They didn’t necessarily over-think a problem, but it needed to be in their own eyeline in order for them to solve it.

He keeps tabs on each character by first sorting them into primary and secondary characters. “There’s a core of six or eight characters that the audience wants to see a lot.” They get the lion’s share of screen time to keep the audience invested. Although the secondary characters occupy far less screen time, none of them are terribly peripheral. Suddenly, one of their stories might become more interesting emotionally and they’ll get more screen time for a bit and the others have to give way.”

We concluded by asking Julian what separates the good writers from the great. “Talent always recognizes genius. Mediocrity never recognizes anything higher than itself.” Not all talented writers are geniuses and not all geniuses are writers. “However, there is something in their work that touches a button and makes you remember them. They have an eternity in their pages.”

“Great writers aren’t only people of their own time. They are people of all time. They have ideas, principles, analyses, and attitudes that take them out of their own society and make them relevant to many others.“