“Outside Culture on a Mainstream Level. Make Our People Visible”

“Outside Culture on a Mainstream Level. Make Our People Visible” Says TV Writer Jorge A. Reyes:

“My mother used to drag me to plays,” joked screenwriter Jorge A. Reyes, a self-proclaimed theater kid. “I was raised in Buffalo, New York, and she had a subscription for Shea’s Buffalo Theater. I was entranced.” At the age of eleven, Reyes knew he wanted to be a writer of some capacity, and when he realized there were seven or eight working screenwriters from Buffalo, he saw an artistic path to a career as a creative.

In 1996, Reyes wrote an episode of New York Undercover called “Brown Like Me” that gained a lot of attention. “At that time, it was hard to do a TV show that featured hip-hop music, outside of New York Undercover and Arsenio Hall. It was the first show with a Black and Puerto Rican lead. It was set in New York, and I felt like they were represented in a way that I hadn’t seen in my lifetime. We were center stage.”

New York Undercover starred Malik Yoba and Michael DeLorenzo. Reyes’ episode involved the exploration of divisions between Latin people, specifically within gangs, and how to have a “nuanced conversation about something very specific.” He continued, “I was clearly Latin and informed by my ethnic heritage, but I also wanted to be able to write anything.” This mindset eventually led Reyes to write for shows including Rescue 77, Resurrection Blvd., Kevin Hill, and Queen of the South.

“I wanted to write things that either overtly or subtlety showed what our culture was, but on a mainstream level. I want to make our people visible, but not make everything I write about being Latin.”

“Gang culture was more of a West Coast thing at that time,” said Reyes about his first TV writing gig. “I’m Puerto Rican from the East Coast, which was very different than a Mexican living in East LA.” Latinos are not a homogeneous bunch.

The screenwriter had family “on the other side of the law” and other family members “in law enforcement” giving him a unique perspective in writing cop shows. Describing himself as “adjacent” to legal and illegal family members, he found a voice writing about things he observed. 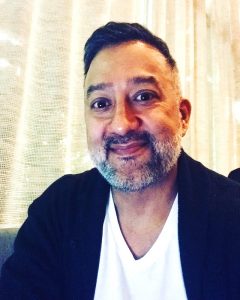 According to Reyes, many non-Latino writers essentially don’t have exposure to Latino culture, which leads to many errors in how they are portrayed on the screen. “I worked on Queen of the South, but the year I came on, there was a Showrunner change, and the majority of the writing staff was Latin. Even though we’re writing about gangsters, we’re all innately aware of the tropes that have been told about people that look like us for decades.” Most Latinos are law-abiding citizens who want to make a positive contribution to their communities.

“When you’re looking from the outside-in, as a non person-of-color might be, you inadvertently fall back on stereotypes and hollow representations of us, which is why, for the longest time, you only saw Latinos as gang members, maids, or police. It was a narrow portrait caricature of our humanity. We had no control of how we were depicted.” The portrayal of Latino characters on screen is undergoing a renaissance as an increasing number of such characters are depicted in a wider range of roles.

Reyes said, “If we’re going to tell a story about gangs, it has to be a fully realized picture. There’s a reality that those people exist, but when that’s all you see on television, it’s limiting to an entire community. We feel a social responsibility to correct those preconceptions.”

When the writer saw Jimmy Smits as Victor Sifuentes on L.A. Law in the 1980s, he felt like there was finally a more accurate portrayal on television. The same is true for Freddy Rodriguez being cast on HBO’s Six Feet Under. This was only the beginning of the change.

With a handful of Latin characters on television, the door started to open for Latin writers in the TV writers’ room and eventually in the pitch meetings. “We didn’t want toothless portrayals of angelic people, but flawed, beautiful, respectful portrayals of us.”

In 2020, Reyes was part of the 270 Latinx writers who sent an open letter to Hollywood demanding a systemic change in the entertainment industry. Lin-Manuael Miranda, John Leguizamo, and Glorida Calderón Kellett were also involved.

“Every writer that I know would tell you, ‘No story is about us, without us.’ You have told our stories for far too long without our input, or without us hearing it,” said Reyes, about any project involving minority characters. “At this point, now we should be driving the stories.”

In addition to social responsibility, Reyes also has some “templates” he looks to that helped shape his voice. The first was American playwright Neil Simon (The Odd Couple, The Goodbye Girl). “I taught myself the rhythm of words. I loved David Mamet (Glengarry Glen Ross, State and Main), and all these great theater guys.”

“My voice is influenced by that, so the template I modeled what I’m trying to hit is James L. Brooks (Broadcast News, As Good As It Gets). He’s a God to me. Sometimes if I’m stuck, I’ll go back and play one of his movies. It’s the beauty of a line, or the delicacy of what he’s created in his work. It’s full of humanity and love. He cuts to the core.”

One of Brooks’ characters, Simon Bishop (Greg Kinnear) in As Good As It Gets says, “If you stare at someone long enough, you discover their humanity.” Reyes believes this shines in all of Brooks’ works, and he strives to replicate it in his own work.

“I write from a hopeful point of view,” said Reyes. “All of these great, wonderful writers fused this voice of mine. I’m looking for the human moment that reveals. As much as I’m a player in this game, I’m a fan.”

Genre As A Trojan Horse

The Taye Diggs television series Kevin Hill, which Reyes created, was the story of a bachelor and top-notch lawyer who became the caretaker for his cousin’s ten-month-old Sarah, after his cousin died. The creator described the show as his version of Ally McBeal.

“I’m a huge David E. Kelley fan and I loved the way he used the legal franchise to talk about sexual policies. I thought it would be interesting to do this from a black man’s point-of-view. That was less about crime than it was about how men and women relate to each other. The legal franchise was the Trojan horse.” 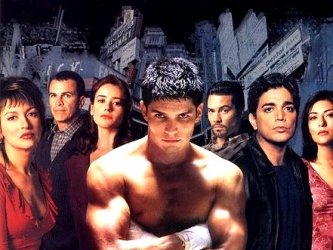 Likewise, on Resurrection Blvd., which was about a struggling Latino family of boxers in East LA, the underlying story was about much more than boxing. “It’s a genre I enjoy, but currently what I’m doing is looking to tell stories about Latin people, that are professional, and operating within our society like my cousins, my mom, and people I know to talk about their struggles and aspirations. You do not see Latin people on television dating each other.”

Currently, Reyes is working on a series with Pharrell Williams and another series about Fat Joe, the rapper from New York. “If the story is right, I won't let the fact that a crime element is involved stop me from doing it, but it can’t just be that. Queen of the South worked because it’s about a woman in a male-dominated field,” he said about the show starring Alice Braga.

Overall, Reyes said his main inspiration comes from passion. “I generally go toward my interests. If I find it interesting, I think that’s a gauge other people might use.” In terms of writing advice, the screenwriter would tell you some advice he heard from Bob Frank, “Never chase the market. Develop your voice, find out what interests you, and you’ll have a full career forever.”