This entry is part 2 of 2 in the series Heist:

Here is the final part of our series in writing heist films.

Just like your characters, a screenwriter needs to consider every aspect of the heist and come up with scenarios for when there are unforeseen variables that interfere with that plan. No matter how fool proof their plan is, there needs to be complications every step of the way.

First, consider your style & approach. The tone and voice of your overall script should match the manner in which your characters carry out the heist. Make sure your word choice reflects the tone you wish to convey.

Are you kicking in the door with guns blazing or slipping in under the radar? The answer should depend on your main character and the world they live in. The bank robber Doug in The Town uses brute force because that’s all he knows growing up in his Boston neighborhood.

Meanwhile, The Four Horseman of Now You See Me are magicians, so their heists rely on sleight of hand, tricks, and illusions. Ethan Hunt from Mission Impossible can certainly shoot his way out of a bad situation, but that’s only if he has to if things go south.

So, if you were to try and steal a priceless jewel, would you go in there like Jean-Pierre Melville or Michael Mann? Smart and sophisticated, or blunt and brutal?

Timing — Every heist takes place during a ticking clock. The goal is to get in and out as quickly and cleanly as possible. With so many factors working against them, their greatest threat is time.

If your heist team is working against an actual timer, remember a page of action equals about a minute of runtime, and if you’re working with short paragraphs or sentences to reflect the speed action, you might run over that amount. So, if you’re counting down, try to keep it in sync with the timing on the page. 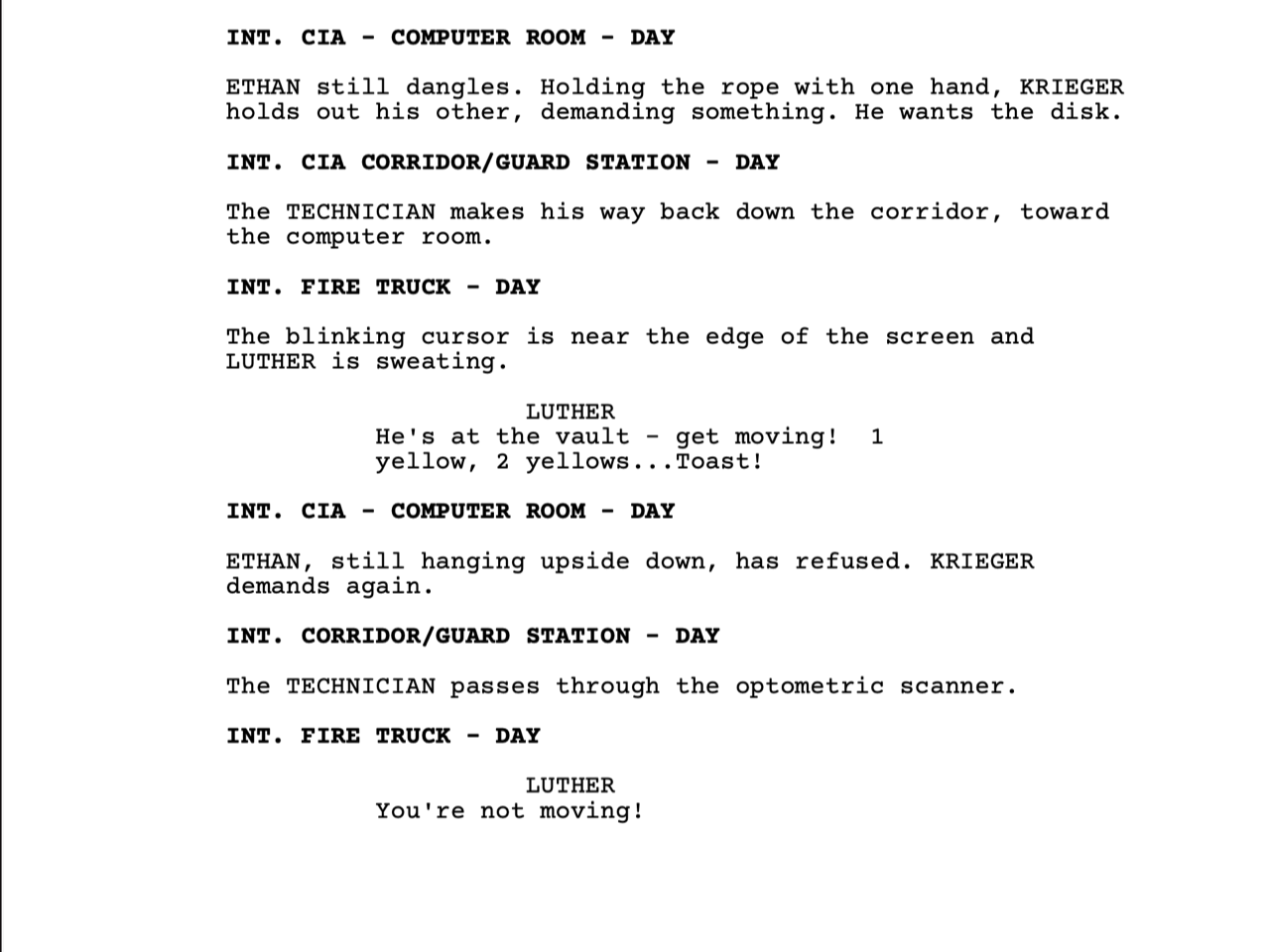 Formatting – If you take a look at this example from the climax of the Mission Impossible heist scene, you can see the rhythm Koepp and Towne create by keeping their paragraphs to one or two lines per scene heading. Dialogue is only used to increase tension.

Descriptions – Once you get the momentum going, keep the descriptions as brief as possible. Short sentence that convey exact actions are best. You can capitalize key actions or objects to add emphasis. Take a look at how Peter Craig introduces the characters of The Town during the middle of a robbery. He wastes no time and introduces them through action.

Nothing Ever Goes As Planned

No matter how fool proof the team’s plan seems, something is bound to go wrong at some point. The more abstract variables that arise, the more tension will be created. If the character’s have to think on their toes, chances are the audience will be on the edge of their seats. Just when things start going right, throw a wrench in their plans and make them overcome it. 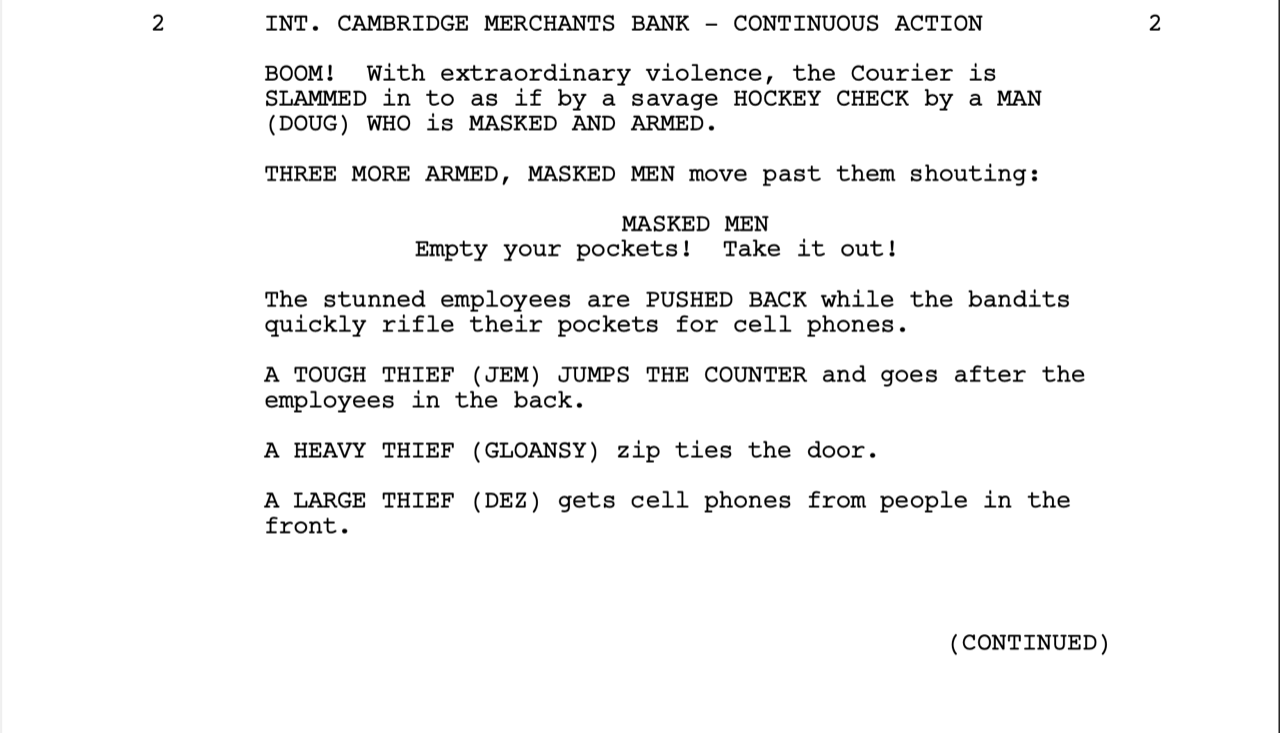 A great example of this is the famous heist scene in Mission Impossible when Ethan has to extract data from a vault located in the CIA Headquarters. Each step of the way, another complication brings their mission closer to failure. Yet, through seemingly impossible feats, Ethan is able to pull it off.

In Heat, everything seems to be going as planned. The thieves have the money and are seconds away from freedom — when the police arrive in swarms. They’re cornered and have to shoot their way out.

This is the team’s point of no return, where the protagonist reaches their lowest and closest point to failure. Their escape becomes impossible. Yet, somehow — they’re able to out maneuver or out gun their adversaries.

Hell or High Water flips this convention on its head by being set in the open carry state of Texas, so citizens take matters into their own hands before law enforcement can even arrive. When the bank robbing brothers exit the bank to a line of shooters taking aim, the audience is captivated because their expectations are met in unconventional ways. 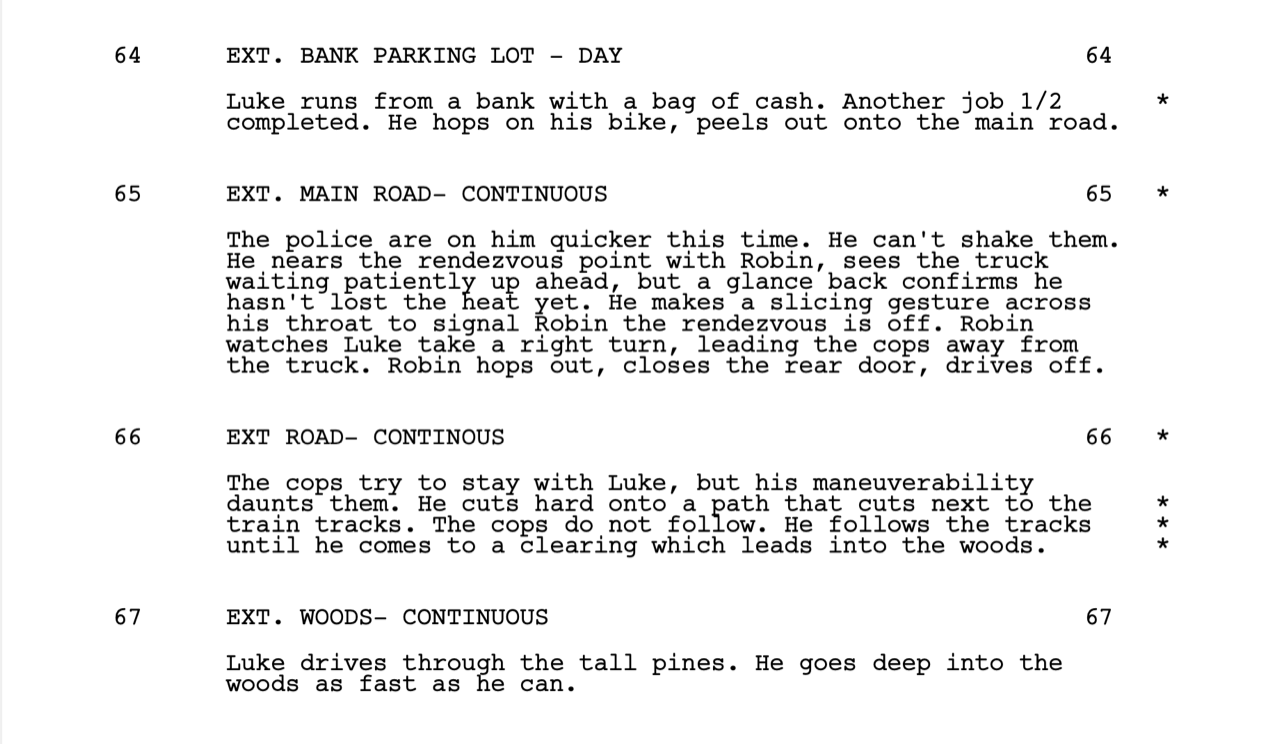 What’s a heist film without a proper chase scene? Chase scenes are often written in larger chunks of action, yet still manage to drum up speed through their use of action verbs, as displayed by the reigning champ of chase scenes, Ryan Gosling in Drive and The Place Beyond the Pines.

When heist movies became prevalent again in the 1950’s, they were required by the Motion Picture Association of America to end in failure due to proper moral standards. Nowadays, the line of good and bad has become blurred. Heist films have always been a reflection of a broken system that pushes people to their limits and forces them to resort to drastic measures in order to break free.