The Extent Of The Streaming Revolution Hasn’t Been Fully Grasped

This entry is part 1 of 2 in the series Streaming Revolution:

“I’m the sorter on the ground floor, separating the wheat from the chaff at Netflix,” he said humbly. At the most basic level, Schulman must figure out if there are worthwhile projects in his reading stack that meet a certain threshold of quality and appropriateness. He’s the gatekeeper who decides if something is worthy of sending up the chain of command.

The proportion of scripts that Michael reads that are truly ready to go is less than one percent. “Most writers only have an average grasp of the craft. I think writing is tantamount to learning a new language and becoming fluent in it.” It takes years of practice to learn the nuances of the craft.

It’s important to note that there is little (if any) development going on at Netflix during this process. “It’s a binary decision. Consider or Pass. I don’t think if there’s a nugget of brilliance in a submission we can develop it further.” That’s why Schulman cautions agains writers directly approaching Netflix, or any streamer for that matter, with a naked script without a production company they have a track record with attached. Otherwise, it risks falling into a black hole never to be seen again let alone considered.

“There’s a perception that streaming is where it’s all at right now,” he continued, “with the exception of the big super event tentpole movies which require a level of theatrical release to meet their box office targets.” For lower-budgeted films, Schulman considers a theatrical release only as a pre-requisite for awards nomination, though this is changing as streamers garner their accolades at the Emmys and Golden Globes. 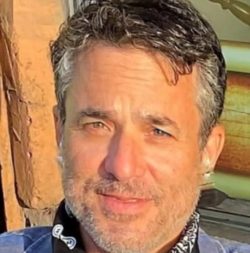 He doesn’t believe that the wider industry has fully grasped the impact of the streamers on the industry.

Michael Schulman likens the streaming revolution to the video revolution in the mid-80s when he got his start in the movie business. It took the big agencies a while to process the fact that over fifty percent of their movie revenue was now coming from video rather than theatrical releases. “They didn’t know how to factor video into their screenwriter contracts which was based on first dollar box office gross.” Although screenwriters have made some gains in their contracts with the streamers, they still fall short of more lucrative theatrical contracts which routinely include ongoing residuals. “The streaming revolution is analogous to video, but exponentially more complex.”

Schulman spends a good deal of time reading professional level submissions for consideration, but he also gives extensive notes ranging from whether a story works on a conceptual level to comprehensive structural feedback on scripts which are already in the consideration pipeline.

Screenwriting isn’t only about the craft. It’s also important to identify the sensibility and feel of writer’s screenplays.

“The streamers have drastically changed what content is marketable as it caters to specialty audiences.” Precisely defining what type of content a particular streamer is looking for at a given point in time is a moving target. Schulman claims streamers believe, “It’s a bit like pornography. We can’t define what we want, but we’ll know it when we see it.” In all fairness, they may occasionally mention specific genres in their remits such as contemporary romantic comedies and psychological thrillers. However, genre requests have limited use since everyone is looking for the same things.

Schulman reverse engineers the mandate model of the main streamers. “I look at them as a consumer. I look at the grids and see how they describe their content. They don’t use genre labels so much. Instead they use terms like cerebral, intense, slow-burn, or chilling.” These adjectives describe a subjective viewing experience rather than defining a type of movie.

It’s still unclear how much more personalized and subjective the streaming business model will become. Sometimes, they offer recommendations based on what you previously watched, or what people in your viewing community watched. Theaters are restricted by physical space and screening time slots. Audiences can conceivably watch anything, anytime, anyplace on seemingly infinite bandwidth on streamers.

The theatrical and streaming business models have converged in some ways. Studios used to control the development, production, distribution, and exhibition of films. Today, they are more invested in acquisition of IP and distribution. Similarly, Netflix and other streamers don’t develop and produce much content. The majority of it is acquired from a production company in their supply chain and branded as a “Netflix Original.” “It’s more of a hands off process. They’re buying a finished product rather than a package they shepherd into production.”

The business models between streamers and studios are decidedly different. “There is a different revenue, consumption and delivery model between them. The traditional box office metrics are less relevant to the industry as a whole and the viewing figures on streamers remain largely guarded.” Like all online models, streamers can measure a range of statistics like “number of minutes viewed” and engagement/ buzz on social media. They want to build communities. This is their way of maintaining their subscriber base.

Another key difference is that streamers aren’t completely beholden to tried and tested stories to the same extent as studios. They can hedge their bets since they aren’t reliant on an opening weekend box office to sustain them. They’re looking for that up and coming writer or filmmaker. “They’re looking for something new and flashy after someone else has done the heavy lifting.”

Their story departments don’t necessarily operate as many writers might imagine. Notes are typically about quality, decency and budgetary standards. “They are not part of the joyous creative process.” However, they do rely on flagship shows to anchor their brands like The Handmaid’s Tale on Hulu or Game Of Thrones on HBO. “They way they find these shows is by establishing working relationships with proven talent like J.J. Abrams and David E. Kelley. They want these types of shows to come to them organically rather than generating them from the ground up.”

Since film and TV writers have limited access to Netflix executives to pitch their shows, Michael Schulman advises writers “to pitch in terms of comps. Movie A meets movie B. Netflix wants to know how to conceive a project – the concept, the structure, the twist, the feel.”

Comps (comparable) aren’t exclusively restricted to the subject matter. “It means the tone, the scale, the j’ai ne sais quoi,” he said. After a writer has established two or three comps, they should find out who produced those or similar movies and reach out to them and their networks. “These producers likely share your world view, tastes, and filmmakers.” These producers will be your partners in the pitching process.

Despite streamers not actively producing content, they are closer to the filmmaker talent than distributers have typically been. In some respects, they are taking the place of traditional financiers and executive producers.