The Films Of Stephen King (Part 1)

This entry is part 1 of 2 in the series Stephen King:

The telegram was sent by editor William Thompson when twenty-six-year-old Stephen King was grading papers at Hampden Academy. It was delivered two years after his wife had taken the unfinished manuscript out of the trash — initially intended to be a short story for Cavalier magazine. King wrote in his book, On Writing: Memoir of the Craft, “I did three single-spaced pages of a first draft, then crumpled them up in disgust and threw them away… I couldn’t see wasting two weeks, maybe even a month, creating a novella I didn’t like and wouldn’t be able to sell.” Soon a bestseller, Brian De Palma directed Carrie in 1976 with Sissy Spacek portraying the teenager with telekinetic powers. The film lit a fierce streak of film and TV adaptations with more in the pipeline after It and It Chapter 2 smashed the box office for over a billion dollars. Creatives from all sides of the industry discuss the nostalgia and classics of Stephen King, and what makes his masterpieces bleed from the pages to the screen.

“I became a fan of the stories by Stephen King at an early age,” said screenwriter/author Diana Ossana (Brokeback Mountain, Pretty Boy Floyd, Zeke and Ned). “The first King novel I read was Carrie. The second was The Shining. Before reading the novels, I had seen the films, which prompted me to search out the source material. While reading, I discovered how powerful the inner lives of King’s characters came through in his writing and how much I learned about their motivations and qualities of personality.” 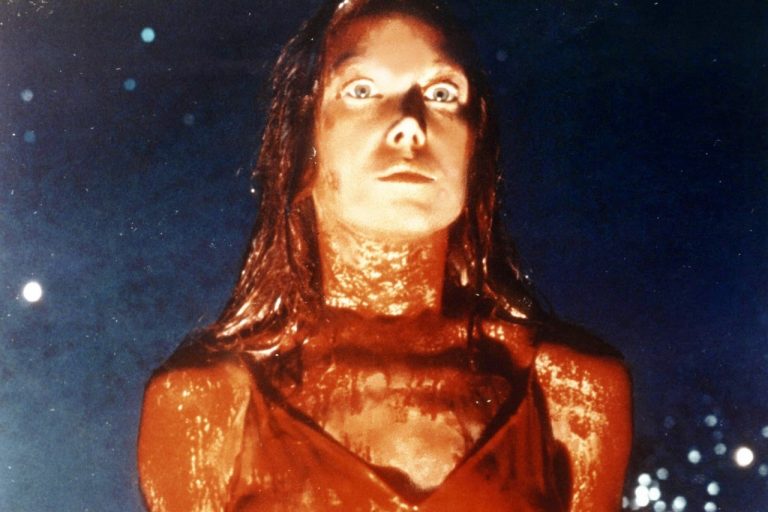 “Stephen King has had a huge influence on me as a filmmaker,” said Jeffrey Reddick, writer/producer of the Final Destination franchise, Tamara, Dead Awake, 2008’s Dawn of the Dead and Don’t Look Back. “My movie Tamara is a straight up my homage to Carrie… I remember sneaking out of room to watch Salem’s Lot. The scene at Danny Glick’s window traumatized me for sure. But I started reading Stephen King’s books and fell in love with his stories and style. He has a unique way of bringing small town people to vivid life and tell very human stories that involve fantastical scenarios. He’s my favorite author by far and I was so honored and humbled when I heard him list Final Destination as one of his favorite horror films. King’s influence is pretty obvious in most of my work. His work really introduced me to fantasy horror. Even though he has written about human killers, his work that impacted me the most were the works that involved otherworldly threats.”

“Growing up and being an avid watcher of films,” reflected Mary Aloe, owner of Aloe Entertainment and producer of Flag Day (Sean Penn), Worth (Michael Keaton, Stanley Tucci) and Bruised (Halle Berry). “I never really liked violence for the sake of it, young adults just running from a crazed killer or something like that. I liked that there was an actual storyline behind Misery but still gave the actual feeling that adrenaline rush of that fear and also that it could happen to you. What’s interesting is the crazed fans, right? You make a movie, you write a novel and I have to wonder if it ever happened to Stephen King, as a writer of novels. You know, James Caan basically played a very successful novelist, a famous author who suffered a car crash and was rescued by a fan of his novels. And then he was cared for, sequestered away in this sort of nightmare of captivity and abuse that made both he and Kathy Bates a superstar. And it’s almost a two-hander, but not for a moment do you ever feel it’s in true Stephen King fashion. It is, although maybe a perverse sense of female empowerment, extraordinary. And then just for great movie going growing up, Creepshow and Children of the Corn.”

Adaptations have multiplied aggressively, amounting to sixty films, multiple miniseries, limited series and various TV episodes. A third of his work adapted so far, King has joined the ranks of Charles Dickens and J.R.R. Tolkien for creating endlessly revisited material. The obvious classics that have entered pop culture and sparked universal acclaim — The Shining, It, Misery, Cujo, Christine, Pet Sematary — have shifted focus on his other work. 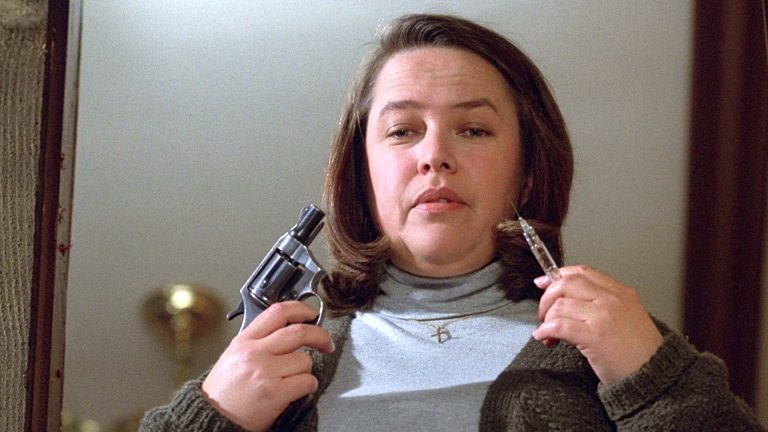 “Of course, Carrie, Christine, Misery, The Shawshank Redemption, Stand by Me, The Green Mile — all are brilliant adaptations of magnificent novels,” said Reinhard Denke, co-author of It’s a Wonderful Time. “But for me, Richard Price and Jason Bateman’s adaptation of The Outsider was magnificent. The casting, pacing, direction and improvements were terrific. Ben Mendelsohn’s Sheriff Ralph Anderson was exactly how I pictured him in the book, same with Bill Camp’s Howard Solomon and the choice of Cynthia Erivo as Holly Gibney was supremely inspired. The execution of one of King’s better ‘post-accident’ books was particularly stunning because the ending was even better than the book’s, which felt truncated to me. The TV limited series format is far more effective capturing a great novel than the limitations of feature films, and The Outsider is the perfect example of how to make a really good book even better.” On the worst: “I go easy on Stephen King adaptations because the stories themselves are so good they’re hard to screw up, but in the case of The Dark Half, and I don’t know how, but George Romero blew it.”

“King predated the overlapping Marvel Universe through his 1992 one-two punch of Gerald’s Game and Dolores Claiborne,” said Jeff Watson, former Warner Bros. executive and host of the upcoming podcast, Inspired Minds. “In it, another King character appears, that of The Gunslinger, Roland Deschain of his The Dark Tower series. Semi-forgotten and overshadowed by Carrie, The Shining and The Shawshank Redemption, Frank Darabont’s The Mist is a story of people trapped in a supermarket, fighting mysterious monsters from an oncoming mist. The film is one of King’s more frightening films and keeps its tense horror through well-placed silence. The ending is certainly one of the most punishing in all of King’s works.”

“Firstly, we’re a deeply Puritanical country here in America, and Stephen King is so good at interrogating the American impulse toward blind faith,” explained Kelly Gallagher, Dark Castle Story Editor and co-producer of Seance, The Expecting and Paramount Players’ upcoming Orphan: First Kill. “This shows up all over genre nowadays. Same thing with his fixation on the American small town — there are echoes of that all over the place. There are probably at least five more example of King’s pet fascinations that we keep revisiting as a culture, outside of the massive amount of literal King adaptations themselves. Mike Flanagan’s excellent Midnight Mass is only the most recent best example of King’s influence beyond literal adaptation.”

Weaving through the storylines as a common thread is the human element. Good or bad, the reader/viewer is drawn to the characters — whether it’s Andy Dufrense, Randall Flagg, “The Losers Club” or Pennywise the Dancing Clown. The understanding that attachment means suffering, the loss of innocence, or the battle between good and evil, has provoked intense emotions along with great entertainment.

“We all feel we either know, or have known, an Annie Wilkes. Or a Jack Torrance, a Beverly Marsh, Ritchie Tozier or a Carrie White,” said Denke. “We all have known the very human and sometimes awkward characters King brings to life that lend themselves so easily to the screen, whether it be TV or feature films. The characters drive the stories, no matter which film; Andy Dufresne and Red Redding drive The Shawshank Redemption, not that awful Warden Norton or Captain Hadley. The plots are inevitably simple, which fits movie narratives perfectly.”

“You only fear for characters if they feel like fully realized people,” said Reddick. “Not only are the characters he creates so rich, complex and human — but he’s great at creating towns and locations that feel lived in. His work tends to involve evil visiting a small town. A town where things seem safe on the surface. And often this evil stirs up the darkness that lies within people. We all have a dark side that we struggle with. Of course, it’s usually not the ‘I want to murder people’ dark…but no matter how hard we try to be good… dark thoughts and impulses… whether it’s jealousy, resentment or wanting to hurt someone who’s hurt you… these feelings swirl inside of us all. Stephen King has a way of tapping into that potential for darkness in such a smart and insightful way, it makes us think ‘there but for the grace of God… go I.’”

“Carrie is very fortuitous and even more relevant today in the aspect of bullying,” said Aloe. “A young girl that had a very oppressive, very abusive, a very controlling mother. And so when she went home, she didn’t have any reprieve to care for Carrie, but when she went to school and all she tried to do is be kind to people, she was bullied. So, there was this incredible storyline that actually meant something. At the end of the day, in King of Horror Stephen King fashion, Carrie gets through revenge through incredible powers that she has and to the breaking point and those powers, I believed coming into the theater, were breaking point from that. She had nowhere to go in her mind. Everything inside of her mind, body and soul sought vengeance, but redemption in the same way. And that’s incredible to be able to do it and Carrie lives on today.”

“He pioneered (and continues to foster) what I refer to as ‘smart horror,’” commented Tasha Hardy, Star Trek special World Enough and Time producer/Head of Creative Operations at Rock Content. “His characters are so deeply relatable and emotionally layered, the horror aspect (secondary) hooks us deeply. This is reflected in movies like I Am Legend, The Walking Dead series and more recently Spell and Utopia. Besides more riveting and engaging storylines, King helped grow the shaping of the aesthetic and directorial imagery of smarter horror films. Leaning less on reactions coming from the environment/monsters and more on a human survival connection level, he pushed us to be inside the character’s fears more as opposed to merely an onlooker of a series of ‘super scary moments.’ In many of the more developed horror films similar to King’s style, we have a grasp on the big picture and feel satisfied on more levels by the end.”

Horror is often synonymous with King’s name, but the greatest adaptations haven’t always been in the horror genre. When screenwriters Bruce A. Evans and Raynold Gideon adapted the novella The Body in 1986—changing the title to Stand by Me after Ben E. King’s classic song—the coming-of-age drama tugged at heartstrings worldwide. Frank Darabont carried on the tradition with The Shawshank Redemption and The Green Mile, proving King’s storytelling could go beyond suspense and scares onscreen.