“We’re Not Making Fun Of You”

“We’re Not Making Fun Of You” How Tom Gormican & Kevin Etten Convinced Nic Cage To Sign On To “The Unbearable Weight Of Massive Talent”:

Making films based on celebrities can be tricky. Especially if the said celebrities plays both current and younger versions of themselves. That’s exactly what Nicolas Cage did. He even managed to smooch his younger self. He smooches real good. Confused? Intrigued? Film and TV writers Tom Gormican (Ghosted) and Kevin Etten (Kevin Can F**k Himself) explain their approach to writing “The Unbearable Weight Of Massive Talent.”

“We never thought the idea was viable,” confessed Kevin. “Massive Talent was borne out of a love of Nic.” Tom Gormican approached Kevin Etten with the kernel of an idea where Nic Cage plays Nick Cage. (The Nick character is spelled with a “k” on the end in the film). 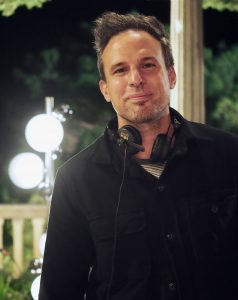 Nicolas Kim Cage is best known for his 80s, 90s and 2000s big budget Hollywood movies. More recently, he’s also known for accepting almost every offer to address his mounting debts. That didn’t affect his commitment to his acting craft. These roles tested his acting chops and probably have even made him a better actor.

“We always knew that Nic was eventually going to return to the zeitgeist in some way,” said Tom. “He was never really gone. He’s too talented to stay out of the mainstream for too long.” This was the central mantra of Massive Talent.

Acting range aside, Cage has been the subject of numerous memes that make people smile. “He has this good will about him,” Tom continued. They wanted to capture that amicability on screen.

“Good will comes out of two things. The first is his massive talent and the second is his desire to ignore others and follow his inner voice,” asserted Kevin. Cage’s unbridled spirit of doing whatever he wanted struck a chord with Gormican and Etten.

Wanting to make a movie about Nic Cage starring Nic Cage is not a story per se. It’s barely a story idea. The writing duo decided early on that Massive Talent would begin with Nick being invited to a superfan’s birthday party. “The kernel of the idea was that he would have to become the action hero he was in late 90s/ early 2000s in order to save his family and himself,” said Tom.

In order to start the story Gormican and Etten decided at what stage Nick was in his life and career to give the screenplay legs. “Then how quickly and smoothly can you jump between genres that Nic was done to suggest the transformation of his character,” said Tom.

The screenwriters spent the most time shaping the first act of the story rather than write an entire draft and going back for rewrites. “The first act of our movie has a three act structure to it.” They had to bring Nick to a very low point in his life and career so he falls into the second act and agree to attend the superfan’s (Javi Gutierrez played by Pedro Pascal) party. They wrestled with this concept for quite a while. Furthermore, they knew that their script would eventually land on Nic’s desk, although they had no idea of the logistics.

The writing pair were acutely aware that Massive Talent might land as a parody, sketch, satire, or spoof of Cage’s previous work. In order to attract him to the project, the characters in the family drama had to be fully fleshed out. “In order for this to be a celebration, we had to emotionally attach to the character, his relationship to work and his family,” added Tom.

Kevin Etten described the comedy in the movie as “character-driven. Nic would reject a forced or fake gag that the scene didn’t call for.” Tom Gormican called it a “story-driven comedy. He advised Cage to play the story dead-seriously and put the character in situations that made the audience laugh.”

In the earlier versions of the story setup, “Nick was more of an absent father, more narcissistic, ego-driven actor,” added Kevin. Curiously, Nic wanted some of these portrayals of himself on screen pared back. Nic said, “I’m willing to poke fun at myself, my financial difficulties, and some of the crazy things I’ve done, but I’m not comfortable with this. It’s not who I  am.” Nicolas Cage also believed that the audience wouldn’t empathize with too flawed a character. “Our fix was to write a dad who is trying, but in all the wrong ways,” Kevin continued. This change would shore up Nick’s character arc as he become a better father and husband while working with the CIA.

Nicky was initially written in the actor’s quintessential Con-Air style. “That’s not me,” Cage rebelled. “That’s a character I embodied.” In response, they turned to Cage’s character of Sailor Ripley in Wild At Heart to model Nicky off of. “We put him in a leather jacket and wrote a character filled with energy, bravado, enthusiasm and optimism about the future.” Nicolas responded to the idea of his altar ego pushing him to grow to become a better man.

The Man Behind The Myth

The ongoing tug of war between the man behind the myth raged between the real Nic Cage and Nick Cage in the movie. The fictionalized version of himself finally merged with the real Nic Cage. Once he flips his action-hero switch, he fulfils the perception of what he should be. “Nic is an eccentric person who works hard. Every wild story he tells is true,” said Kevin. “He’s living this larger than life existence untethered from societal demands. He’s constantly writing his character and living it in real time.”

The writers also decided early in the development process, that Nick was going to quickly find out that Javi was a bad guy. This gave him another dilemma to wrestle with. “We also knew that Nick and Javi would bond as Javi elevated him from his low point to rediscover his love for acting,” continued Kevin. In order to magnify the story, Tom and Kevin added the story of Nick working for CIA to take down the bad hombres. 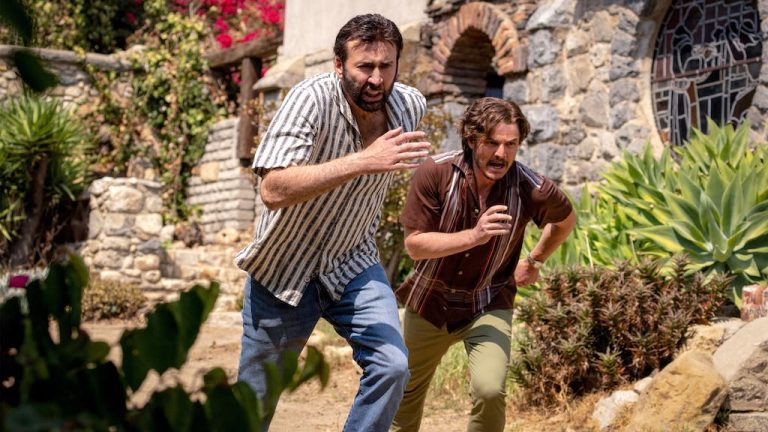 The Unbearable Weight Of Massive Talent took great care to keep the over the top elements on a short leash. “As a director, I’m interested in naturalistic acting,” said Gormican. “The problem is that Nic is interested in giant, expressionistic acting.” The solution to this issue was to create the character of Nicky (thirty years Nick’s junior) to channel this over the top energy. “There’s also a large chunk of the movie where Nicky is on acid, so the audience could better accept the big performances,” said Kevin. Nobody can do paranoia like Nicolas Cage. At one point when Nick thought he would never see Nicky again, he turned to the writers and asked, “Do you want me to go full Cage?”

Nic would also come to set every morning with multiple ideas. Kevin and Tom obliged the actor to see what he would come up with. Nicolas Cage would offer an assortment of grounded and ungrounded performances and respectfully let Tom and Kevin decide on which takes to use. “The movie can only work if the tone is kept somewhat even,” declared Kevin.

It was the music during post-production where Tom and Kevin prevented the movie from slipping into melodrama. “If the music was too comedic and light, the movie would lose its gravitas and lose its heart and soul,” added Kevin.

Massive Talent embraced its own sense of self-reference at the risk of becoming “too meta” and too smart for its own good. Tom Gormican asserted that despite the constant winks to Cage’s acting resume, “our goal was that the film should work if you knew zero of the references,” he continued. “The references were both visual and verbal. They worked both story wise as well as being a nod to Nic’s work.” Nicolas Cage enjoyed playing around with his identity.

Despite Cage agreeing to act in the film, his ultimate participation wasn’t always guaranteed. “His final decision had a lot to do with the Nicky character,” said Tom. “It was a meditation on his life and career… a life in the arts… what you give up or not pay attention to get what you want.”

Some of these choices may not be the healthiest for you as a person. Cage signed on when he was convinced Gormican and Etten were taking Massive Talent seriously as a film rather than making fun of him. Had Cage declined, Tom and Kevin considered Daniel Day Lewis in full Nic Cage prosthetics to play the role.