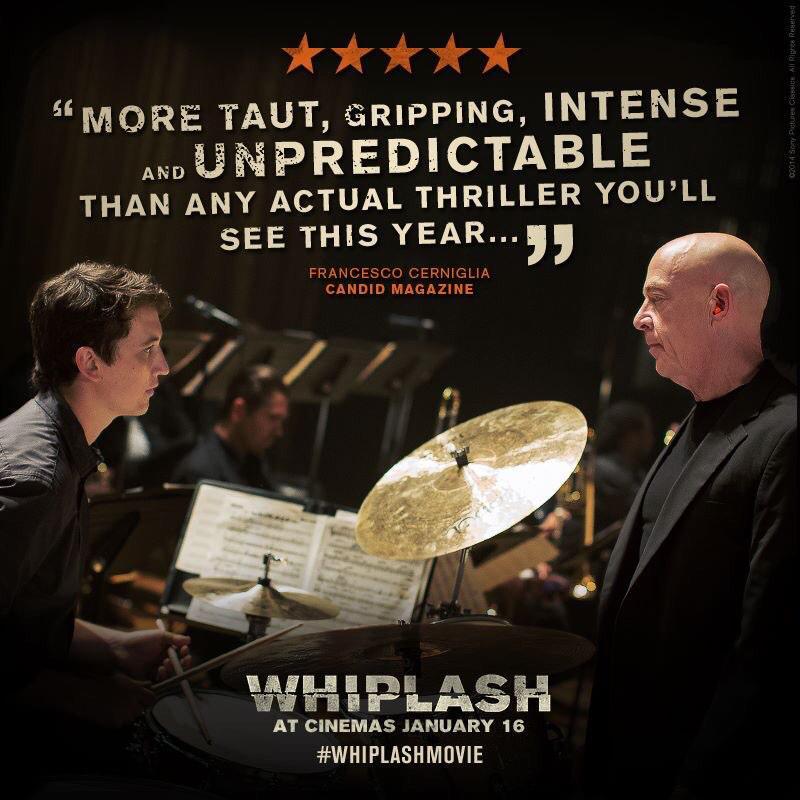 Damien Chazelle's Whiplash - The Path to the Oscars

Sitting in the Eccles Theater at Sundance in 2014 waiting for the movie Whiplash to start was uneventful. I knew nothing about the movie that I was about to see, and to be honest I was probably playing Words with Friends right up until the moment the lights went down.

For those of you who have been to Sundance, you know that the struggle to get tickets is sometimes a bit overwhelming and the nightlife can wear you down, so it is theoretically possible that one might look forward to a movie to catch up on some needed sleep. You might also know that even the "big" movies, Eccles seats over 1000 people, can sometimes miss their mark. So as the screen flickered to life and I realized that the movie was about a young drummer trying to land the lead spot in a jazz band, I settled in for a well needed snooze. But after 5 minutes into the movie, I felt like I was on a roller coaster and I knew that I was going to be taken on a ride so unexpected and thrilling that I would never want to get off.

If you haven't seen the movie yet, go see it. No excuses. Just find a way to see the movie in a theater with a bunch of people and get ready to be enthralled. The fact that it was nominated for 5 Oscars should sweeten the pot just a bit.

Recently I got the chance to sit down with the writer-director of Whiplash, Damien Chazelle. He was warm, insightful, and as he'll tell you, a bit of a perfectionist. His early days as a jazz drummer in high school inspired this story, and Damien explains how the discipline he learned as a musician set him up for the hard work required to get a movie like Whiplash off the ground.

For those of you reading this and considering making the script you wrote into a movie, this podcast should be of great importance. Damien does talk about how the stars aligned for him to get this movie made, but that was only after he put in the hard work to have favor find him. Damien is an inspiring young filmmaker who has just set the bar a lot higher, not only for independent filmmakers looking for their first break, but for the veteran filmmakers who have lost their way.

Damien is a class act, and I am sure that his film will be escorting more than one small golden man home on Oscar night.