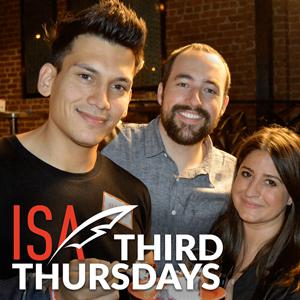 Join us for our October Third Thursdays mixer at Busby's East in Los Angeles as we present a special Producers Panel. The panel will include Jes Bickart from Gidden Media, Liz Wise from CW, producer Robert Deege, and Navid McIlhargey from Vandal Entertainment.

The panel will be moderated by the ISA's Director of Community Outreach Max Timm and will delve into questions like how to get a producer's attention, how producers discover material and talent, and what a writer can do in order to not only get in front of the right people, but impress them at the same time.

This event is free and open to all persons 21 and older, but you must register to attend.

Liz Wise - As SVP of Current Programming at the CW Television Network, Liz acts as creative liaison between the network, producers and studios on the CW primetime drama series hits "DC's Legends of Tomorrow", "The Flash", "Arrow", "Reign", "the 100", "IZombie",in addition to the upcoming fall series "No Tomorrow" and "Riverdale" Prior to the CW, she was an executive at Lifetime, where she played a key creative role in developing and overseeing some of the network's highest rated movies. She joined Lifetime in 2004 from The Alpern Group, a boutique literary agency in Los Angeles where she had established a reputation for finding and championing fresh, unique voices. Prior to the Alpern Group, Liz was an agent with Harrison Artist Management in Toronto, and started her career in the trenches of physical production in Calgary and Toronto.

Robert Deege - With over 20 years in entertainment, Robert Deege is passionate about and intimately familiar with both the creative and business sides – from producing and directing content for feature films, television and new media, to consulting, business development and executive leadership.

In Los Angeles, in his most recent post as a senior executive and co-founder of Indomitable Entertainment, Robert worked across the company’s verticals, including feature films, television and Broadway, sourcing new projects and business; overseeing project development, production and post; and sourcing finance, brands, international sales and distribution.

In Washington DC, Robert produced and directed award-winning documentaries and training films on behalf of Mind & Media for clients such as The National Guard and The Pentagon Force Protection Agency. As a Producer at Discovery Communications, Robert wrote, produced, directed, and edited for numerous shows on Travel Channel, Discovery, TLC, Science Channel, Discovery HD Theater, Discovery Health, and Animal Planet.

Robert is currently developing and producing several feature films, including a thriller from Mark L. Smith (The Revenant), and is a consultant to Glass House Distribution.

Navid McIlhargey - Navid Mcllhargey has been a film development executive and producer for over seventeen years. He was an executive at Joe Roth's Revolution Studios where he worked as an executive on films such as BLACKHAWK DOWN and ANGER MANAGEMENT and oversaw production on PETER PAN, TEARS OF THE SUN, and WHITE CHICKS. He then worked for Joel Silver's Silver Pictures as an Executive Producer on Guy Ritchie directed ROCKNROLLA and ECHELON CONSPIRACY, and he oversaw development on THE FORBIDDEN PLANET, LOGAN'S RUN, THE DIRTY DOZEN, ALTERED CARBON, MASTERS OF THE UNIVERSE, HOT WHEELS, TIME AND AGAIN, and Orson Scott Card's EMPIRE.

As Executive Vice President of New Regency, Navid ran production of BROKEN CITY and THE DARKEST HOUR and developed GRAY MAN, GUNSLINGER, END OF ETERNITY, ARCHANGEL, as well as other action fare.

In 2013, Navid started his own production shingle called Vandal Entertainment. The company is in post on its first film entitled THE HUNTER'S PRAYER (aka FOR THE DOGS), based on a novel by Kevin Wignall, which stars Sam Worthington, Odeya Rush, Allen Leech, Martin Compston, Amy Landecker and is directed by Jonathan Mostow.   Vandal has partnered with FilmHouse Germany on several feature projects including THE FEUD (currently in pre-production), N.O.C (also in pre-production), EYEWITNESS, COMMAND AND CONTROL, FLASHBACK (the last three are being packaged).  Vandal also has several TV projects in development at various studios.