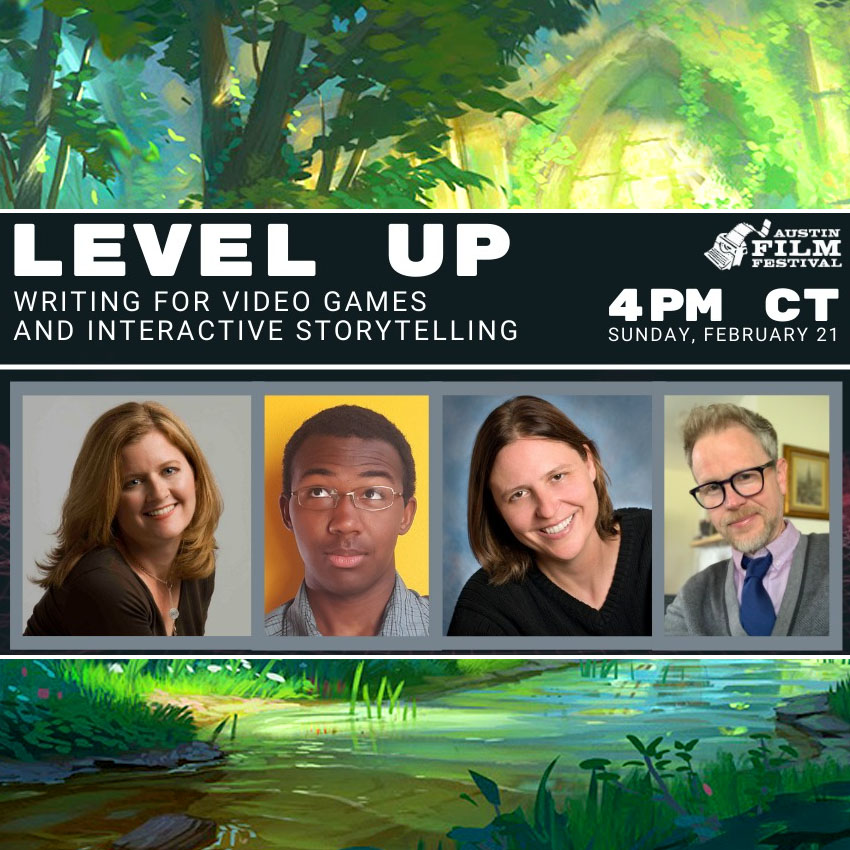 LEVEL UP: Writing for Video Games and Interactive Storytelling

Expand your approach to writing through the lens of interactive storytelling. In this panel, we will be joined by experienced writers behind some of video games biggest hits to discuss the ins and outs of writing for narrative games and what screenwriters can learn from this increasingly popular form of storytelling.

The lines between traditional films and games are continuously blurring with the rise of interactive projects like Black Mirror: Bandersnatch and Unbreakable Kimmy Schmidt: Kimmy vs. the Reverend. This session will explore the collaborative process behind video game writing, the importance of genre in building a game’s narrative, and how this dominant industry is changing the way we experience stories.

A look into interactive storytelling will introduce you to new mediums to focus your creativity and have you looking at your old scripts in fresh ways.

MEET THE PANELISTS
MARIANNE KRAWCZYK
Renowned game writer Marianne Krawczyk has won numerous awards for her pioneering work in the creation of game worlds, stories, and characters. At Sony Santa Monica, Marianne served as lead writer on God of War trilogy and PSP releases and has also been very involved in the overall franchise, consulting on various content including novels and comics. Marianne was nominated for WGA awards for God of War 3 and God of War: Ascension, and she won the BAFTA award for her character and story work on God of War 2.

Marianne has also worked extensively with Ubisoft, THQ, and Activision on other major franchises like Skylanders, Knack-2, Far Cry, and Prince of Persia, the latter of which garnered another WGA award nomination. Marianne served as the lead writer on Klei Entertainment’s Shank and Shank 2, and she collaborated with J.J. Abrams and Roberto Orci on the 2013 video game tie-in to the Star Trek film franchise.  As well as, Hinterland Games The Long Dark.

In addition to her work in games, Marianne has written exclusive content for Amazon Prime, as well as the feature, Appleseed Alpha, directed by Shinji Aramaki.   Marianne was also nominated for an Emmy for her work on Amigo to the Rescue, an interactive project for Disney Junior.

XALAVIER NELSON JR.
Xalavier Nelson Jr. is a BAFTA-nominated, award-winning narrative director, writer, ex-PC Gamer columnist, community organizer, and MCV Rising Star. You might know him from his work on Reigns: Beyond, Hypnospace Outlaw, SkateBIRD, An Airport for Aliens Currently Run by Dogs, or literally dozens of other shipped titles.

He also makes strides in a burgeoning storytelling career outside of games, including writing the cult hit comic Sherlock Holmes Hunts the Moth Man; and continues to deliver talks for festival and conference audiences around the world.

SUSAN O’CONNOR
Susan’s first job as a game writer was for “A Slumber Party Game – For Girls!”. She’s gone on to work on over 25 projects, including award-winning titles in the BioShock, Far Cry, and Tomb Raider franchises. Titles in her portfolio have sold over 30 million copies and generated over $500 million in sales. She is an adjunct professor at UT Austin, where she teaches a course on writing for games. A long time ago, she founded the Game Narrative Summit at GDC. Now, she partners with studios, publishers, and writers to help teams ship great games with great stories. She is dedicated to supporting creatives in the games industry so that they can do their best work.

RYAN KAUFMAN
Ryan Kaufman began his career in 1995 at LucasArts Entertainment, designing and writing for games such as Jedi Knight and Rogue Squadron. He was also Director of Narrative at Telltale Games for 8 years, in creative leadership on Wolf Among Us, Walking Dead, and Game of Thrones. Most recently, he joined Jam City as VP of Narrative, to create a new line of games with world-class narrative on mobile devices.