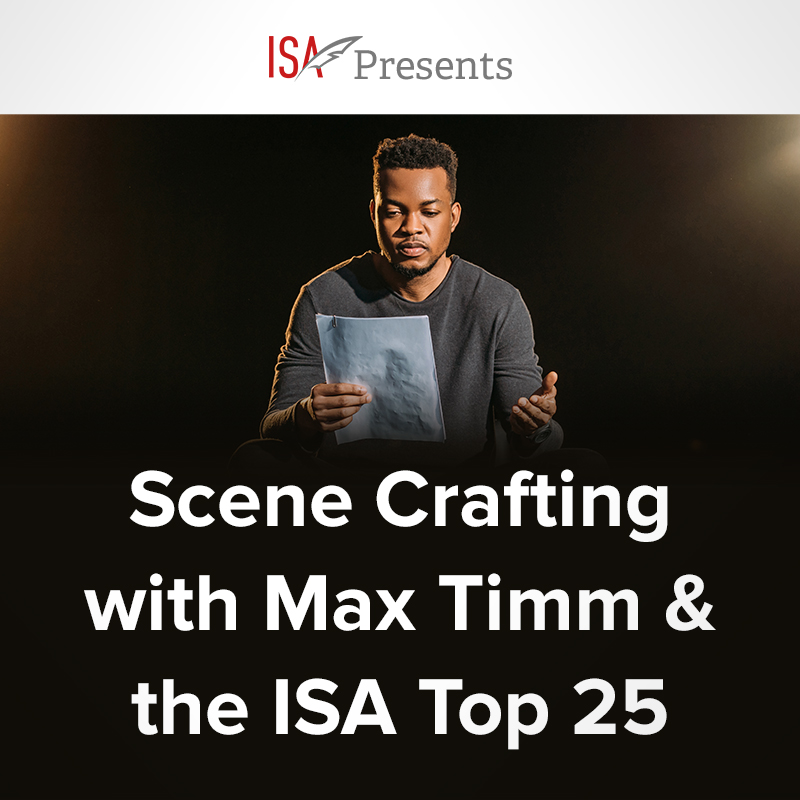 Join the ISA in the most unique event we've hosted yet; a scene crafting exercise that will showcase two of the ISA's Development Slate writer and how they approach writing a scene in real-time. The writers will receive the same story element prompts, and the audience will get to see not only what they came up with from a scene story perspective, but how they format the page, scene direction, dialogue, everything.

Director of Education, Max Timm, will discuss the creative decisions made by each of the writers, while also allowing the writers to chat about their personal preferences when it comes to delivering a scene on the page.

This will be a lot of fun, interactive, and there will be time for Q&A and commentary from the attendees.

When: Wednesday, September 8th at 11:00am PDT (Check Your Time Zone)
Where: Zoom. A link will be sent to you before the event.

Escaped from the hick area of upstate New York, Wendy Jean Wilkins is an award-winning screenwriter, filmmaker and comedian who been in Hollywood for over 28 years. While kicking ass working on television sets, Wendy has been a Warner Brothers Writers’ Workshop Participant, an ABC/Disney Writing Program Finalist, a Final Draft’s Big Break Contest Top-10 Finalist, a Women In Film: NY/Meryl Streep Writers Lab Finalist, twice an Austin Film Festival Second Rounder and in 2019, was named one of ISA’s Top-25 Screenwriters to Watch.
She’s also placed or awarded in over 50 other writing competition.
Wendy’s hottest feature script is the road picture comedy WHERE THE MEN ARE, which won Best Comedy Screenplay at both the 2019 Creative Screenwriting Awards and the 2018 Creative World Awards. Her keenest original pilot, HOMETOWN, a dramatic/sci-fi script won the ISA Fast Track VI Fellowship and the 2018 Space & Time Film Festival screenplay competition. Her most futurist post-apocalyptic pilot, ONE MORE DAY, won best screenplay award for the 2020 Space & Time Film Festival and the 2019 Sherman Oaks Film Festival. Her sexiest pilot, a half-hour dramedy script, COOZE, was a finalist for the 2020 Creative World Awards as well as the 2020 Seriesfest/Kyra Segdwick Big Swig contest. And her snappiest short script, INSIGNIFICANT, won Best Dark Comedy short screenplay at both the 2019 Houston Comedy Film Festival and the 2018 Austin Comedy Short Film Festival.
In 2015, the script for ONE MORE DAY was produced into a radio drama and currently has over 42,000 listens on YouTube.
Dive into one of Wendy’s satirical articles on the Dystopian news website Omnarchy.com where she’s a senior staff writer/director. Or catch her on stage in Los Angeles and across the country performing stand-up to very drunk crowds. Just reminds her of every family Thanksgiving she’s ever had.

Hi! I’m Qaseem and I come from a chubby family that loves to eat. Not surprisingly, I went to Culinary school. What drew me into the Culinary world was not only access to fried treats, but the fast-paced environment and the ability to creatively blend flavours from around the world to make unique dishes. Similarly, creating diverse characters with unique “flavour profiles” is what I love to do as a writer. I’m also really proud to be a current fellow of The Pacific Screenwriting Program’s Scripted Series Lab. I’m glad that I branched out and entered this new field. There is nothing in the world I would rather be doing than writing. Today, I can confidently say “I’m Qaseem Fazal and I’m a chubby screenwriter.”