Joaquin Phoenix and Rooney Mara’s Pro-Vegan Doc The End of Medicine Is All Facts, No ‘Gotcha,’ Says Director

A new documentary from Joaquin Phoenix and Rooney Mara outlines in no uncertain terms the distinct possibility that antibiotics could lose effectiveness on humans within the next century. Although the overall message of the documentary is to promote a vegan, plant-based diet, director Alex Lockwood was extremely cautious not to step into the realm of “gotcha journalism” while making The End of Medicine.

The film makes the case that humans may soon build up antimicrobial resistance because of the overuse of antibiotics to treat factory farm animals. That’s not a wild-eyed conspiracy theory — PBS’s Frontline and The Guardian are among the news organizations that have also explored the threat of antibiotics, which are common in factory farming in part because they bulk up the animals and protect them from disease in close quarters.

“We didn’t want this to be a gotcha-type film. And you’ll notice, the film at no point focuses on a particular individual, a particular company or organization,” Lockwood told MovieMaker.

“We didn’t want it to be like, ‘Oh, we were going in to sort of embarrass people.’ We actually had a few more interviews in the film, and they were actually cut out of the film because it felt too much like they were only in the film to be proved wrong. Even [though] we’d given them lots of time within the film to express their point of view, it just didn’t sit right, and we didn’t want it to feel like that kind of film. We just wanted to be completely fair.”

But as with almost any documentary that includes criticisms of the meat and dairy industries, Lockwood knows there will be attacks.

“We’re definitely anticipating that some people are going to hate the film, and try and say it’s all a load of nonsense. And obviously, there will be people on the other side of that. What I would say to the people who obviously want to challenge the film is that everything we say in the film is led by the science and the data rather than our own agenda, and so we’ve always followed where the science goes, whether we like it or not,” Lockwood said.

“It’s all coming from leading experts and leading health authorities around the world. We’ve got that to back everything in the film up, so that gives us confidence. But yeah, it will definitely challenge people.”

Dr. Alice Brough, a veterinarian featured in the documentary, quit her job after treating animals suffering in deplorable conditions in factory farms in the UK — and instead became a whistleblower. She has dedicated her life to activism in an attempt to help the animals she once treated with heavy antibiotics. 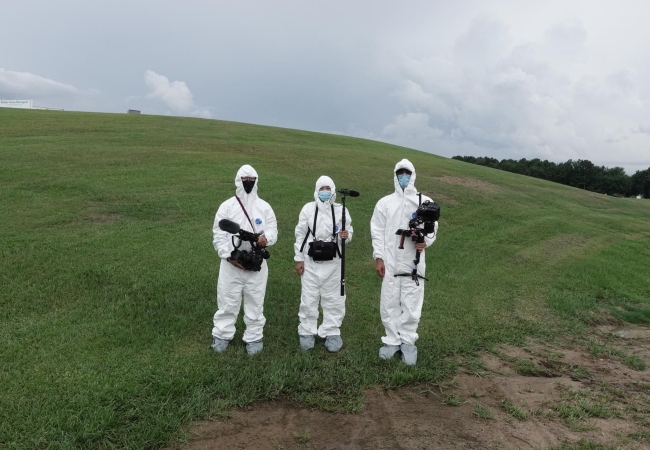 A still from The End of Medicine

“There’s always going to be a backlash from the industry because at the end of the day, they’re trying to sell you a product. If anything you do challenges how people feel about your products, then you’re going to have a problem,” Dr. Brough told MovieMaker. “There’s more and more data coming out all the time which just corroborates everything that we’ve said. Antimicrobial resistance has jumped. The number of deaths each year jumped sevenfold in five years, which is massively higher than what we were expecting it to do. And the only thing that’s changed in that time really is our intensification of animal agriculture.”

In addition to Phoenix and Mara — both of whom are vegans and animal rights activists — The End of Medicine is also produced by Nishat Rahman and Keegan Kuhn, who co-directed Cowspiracy and What The Health with Kip Anderson. Phoenix also served as an executive producer on What The Health.

Mara and Phoenix — who famously used his Oscar best actor acceptance speech for Joker to draw attention to the artificial insemination of cows — were making another documentary on the same topic when they heard about Lockwood and Kuhn’s The End of Medicine and decided to join forces, signing on as executive producers.

“I know a lot of executive producers will just put their name on a film and that’s it, whereas they were really involved,” Lockwood said. “Obviously, not with the day-to-day production, but with watching every draft and giving their feedback and what they thought worked. And they were never kind of intrusive on that process, either.”

He hopes audiences don’t feel depressed when they finish watching, “but actually feel positive and feel like, actually, they’ve got the power to make a difference.”

“Whenever you make a film that’s about a topic like this, we don’t live in a plant-based world, so we’re already starting the race from 100 meters back,” he added. “We’ve got that job of winning people over as they watch the film, and knowing that we had that to overcome at the beginning of making the film, we always wanted to do something that hopefully wouldn’t feel pushy and wouldn’t feel like we were pointing the finger at the audience and having a go at them.”

The End of Medicine will be released in North America on May 10 and is currently available to pre-order on Apple TV.

Main Image: Director Alex Lockwood behind the scenes of The End of Medicine

The post Joaquin Phoenix and Rooney Mara’s Pro-Vegan Doc The End of Medicine Is All Facts, No ‘Gotcha,’ Says Director appeared first on MovieMaker Magazine.