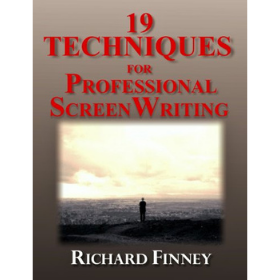 Richard Finney has spent over twenty years working in the Hollywood studio system as a well-paid screenwriter and an independent film producer. He has worked as a screenwriter or producer for Walt Disney, Sony, Warner Brothers, ABC, Fox TV, 20th Century Fox, Lion’s Gate, Lifetime, and CBS.

Finney has sold movie pitches in the six figures which has landed him on the cover of "Variety" and the "Hollywood Reporter." His biggest pitch sale was to Steven Spielberg and DreamWorks SKG. As an independent film producer he has twelve produced movies to his credit.

The words of wisdom in this primer will lead to a better understanding of the process that is required if anyone is to succeed as a professional screenwriter. The e-book is nearly 13,000 words and features the outline of a screenplay (written by the author) that led to a screenplay and novel which have been optioned by a major production company for production.