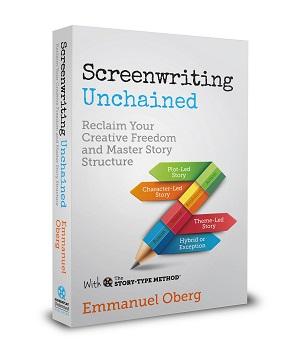 A New Framework for Developing Screenplays

In Screenwriting Unchained, Emmanuel Oberg offers a powerful yet flexible way to handle the script development process: the Story-Type Method. This truly innovative book is aimed at screenwriters of all levels of experience as well as anyone involved creatively in the Film and TV development process: directors, producers, development executives, show runners, story editors and more generally, storytellers keen to reach a wide audience at home and abroad.

As a screenwriter, Emmanuel has been commissioned by:

"Nobody Knows Anything" and "Structure is Everything". In two pithy statements, screenwriting legend William Goldman (Butch Cassidy and the Sundance Kid; Misery; The Princess Bride; Marathon Man), brilliantly encapsulates the essence of the film industry.

With Screenwriting Unchained, Emmanuel Oberg navigates a perilous journey between these two islands of truth. His refreshingly new approach to story structure leads to a powerful yet flexible way to handle the script development process: the Story-Type Method.

Having identified three main story-types - plot-led, character-led, theme-led - he explains how each of these impacts on the structure of any screenplay, and how we can use a single set of tools to develop any story. Crucially, he also looks at hybrids and exceptions, those unique gems that don't fit any of the story-types but still work beautifully because they follow the same principles, just in a less classical way.

If you've ever questioned why all screenplays have to be written in three acts, eight sequences, fifteen beats or twenty-two steps then this book was written for you. And if you never have, well... no time like the present!

Using many case studies including films as diverse as Gravity, Silver Linings Playbook, Crash, Billy Elliot, The Intouchables, Birdman, Alien, Groundhog Day, Misery, Edge of Tomorrow, The Secret in Their Eyes, Cloud Atlas, L.A. Confidential and The Lives of Others, Screenwriting Unchained will transform the way you write, read, pitch, design, assess and develop screenplays. Guaranteed!

Emmanuel is a screenwriter and script consultant with more than twenty years of experience in the Film and TV industry. After selling a first project to Warner Bros as a co-writer, he went on to be commissioned by StudioCanal and Gold Circle before working solo for Working Title / Universal and Film4. He has also designed an internationally acclaimed 3-day Advanced Development Workshop around his innovative Story-Type Method. Screenwriting Unchained is the first in a series of books on screenplay development based on this new method.

Emmanuel lives in the UK with his wife and his two daughters. His film agent is Rachel Holroyd at Casarotto in London.