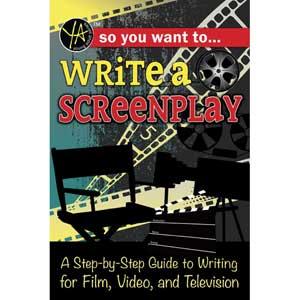 So You Want to Write a Screenplay: A Step-by-Step Guide

Writing for the big screen may seem like a job for the experienced, but the fact is, it's for everyone. Take Celeste Davis, for example, who at fourteen wrote the screenplay for "Purgatory House" and appeared on five critic's lists for best film of the year.

Even if you don't see immediate success, you have to start somewhere. Take Steven Spielberg, for example, who was rejected from college three times before becoming the huge success he is today.

Getting started at a young age is the key to mastering a skill. Imagine already having a screenplay or two under your belt by the time you apply for college - that's exactly what this book will help you to accomplish.

You will learn how to use screenplay-writing software as well as how to actually write a screenplay, from capturing the audience at the introduction to having a satisfying conclusion.

Veteran screenwriters, producers, agents, and directors have been interviewed for this book, giving you inside secrets to the industry. This book also contains information on production companies, including the genre they are looking for, so you know exactly who to contact when you're ready.

If you are eager to jump into Hollywood as the newest young writer, this step-by-step guide will help you get there.