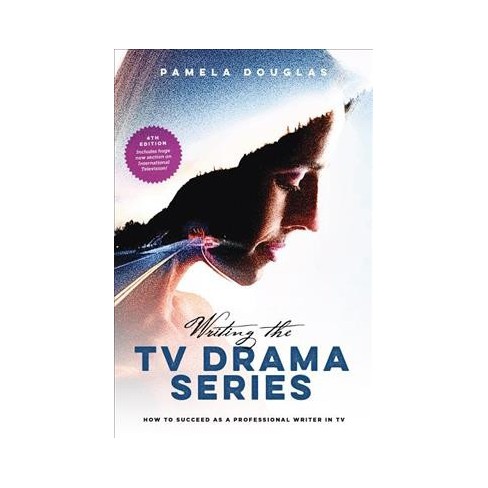 The 4th edition of this best-selling book, released on November 1st, 2018, leads readers into the future and explores provocative issues about the interface between traditional TV and emerging technologies. This updated and revised resource is the single most comprehensive look at what is happening in original television drama around the world, including entertainment surveys of 15 leading countries. This edition is also a complete resource for anyone who wants to write and produce for television drama series or create an original series. It leads the reader step-by-step through every stage of the development and writing process, offering practical industry information and artistic inspiration.

“Pam Douglas takes her invaluable book Writing the TV Drama Series and makes it even more compelling. New sections on streaming, and on the international market, supplement this already-essential read. It’s the book I’d recommend first to anyone looking to launch a career as a writer in television drama.”
Howard A. Rodman, Past President, Writers Guild of America West; Artistic Director, Sundance Screenwriting Labs


“Pamela Douglas continues to surpass herself with her outstanding 4th edition, which includes important chapters on the growth of international television. Not only is it a roadmap for writing all aspects of dramatic television, but it’s a roadmap for a career. Writing the TV Drama Series continues to be the definitive work on writing for television. A must-read if you are serious about a career in television.”
Jack Epps, Jr., Ph.D., Professor and Chair, The John Wells Division of Writing for Screen and Television, USC School of Cinematic Arts; author, Screenwriting Is Rewriting; writer, Top Gun, Dick Tracy


“Pam Douglas taught me the difference between writing a scene, and writing a scene that matters. She is a master at finding the heart of any story. Her perspective as both a professional writer and educator offers anyone wanting to shape a career in TV writing a unique view into the evolving landscape of the business.”
Brian Peterson, showrunner, executive producer, Smallville; consulting producer, National Geographic’s Emmy-nominated Genius anthology; screenwriter, But I’m a Cheerleader


“If you’re curious about the world, and the thrilling confluence of storytelling, business, and values in television drama, the 4th edition of Pam Douglas’s definitive work now charts the global waters of international television. A brilliant guide to the familiar (UK, Brazil); the fashionable (Denmark, Israel); and the future (Nigeria, South Korea)!”
Ted Braun, writer / director, Darfur Now, Betting on Zero


“Pam Douglas lays out the state of the television industry today. For those of us already making television, she offers an insightful guide to where we are going. For those considering TV as a career, she offers even more – encouragement and an invitation to join in.”
Chip Johannessen, Past Governor of Writers’ Branch, Television Academy; executive producer, Homeland, Dexter, 24

“How to write, navigate, and succeed. Pamela Douglas has shown us how to make it in Hollywood and, most importantly, express yourself as a writer in dramatic form in the most accessible medium. Indispensable.”
Dave Watson, author, Walkabout Undone; editor, Movies Matter blog


“If writing for television is in your future, grab this book. Pamela Douglas shows you what you need to know and do. She brings you into the writing room and lets you decide if you’ve got what it takes. You’ll get the gambit, from lessons on how TV scripts are written and formatted to how to get along with fellow coworkers once you get the job. Learn the lessons taught in this book; you’ll fast-track your career.”
Forris Day Jr., host, “Rolling Tape”; guest commentator, “Hitch 20” webseries


“Writing the TV Drama Series has always been of great value to my students – both undergraduate and graduate. This new edition, with an entire chapter devoted to international television, is invaluable to students and screenwriters alike.”
Alexis Krasilovsky, screenwriting professor, California State University, Northridge; author, Great Adaptations: Screenwriting and Global Storytelling


“Great style, a fun read, and a solid overview of the craft and journey involved in writing the TV drama series. An excellent textbook for TV writing courses, or for anyone interested in the field.”
Terry Borst, screenwriter; professor, Santa Fe University of Art and Design