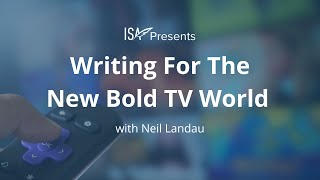 We are joined by award-winning screenwriter, producer, and author Neil Landau to talk about his all new edition of his best-selling guide: THE TV SHOWRUNNER'S ROADMAP: CREATING GREAT TELEVISION IN AN ON DEMAND WORLD.

We will cover these topics and many more:
- How the Global TV Landscape has changed and where it's going.
- How the old rules of storytelling in TV are out the window.
- Common mistakes TV writers make and how to avoid them.
- How to showcase the heart of your story
- How to make your TV Pilot the most marketable


Neil will also be sharing stories from his interviews with CURRENT SHOWRUNNERS and what they all have in common.

ABOUT NEIL LANDAU
Neil Landau serves as Associate Professor, Director Of Screenwriting - MFA in Film, Television and Digital Media at the University Of Georgia. Prior to that, he was Professor and Associate Director of the MFA Writing for Television Program at UCLA TFT, where he taught Screenwriting for more than 20 years. Neil's credits include the cult hit comedy Don't Tell Mom the Babysitter's Dead starring Christina Applegate; Melrose Place, The Magnificent Seven, Doogie Howser, M.D., The Secret World of Alex Mack, Twice in a Lifetime, MTV's Undressed, The Young & the Restless, Monarch Cove, and one-hour drama pilots for CBS, ABC, ABC Family, Warner Bros., Disney, Lifetime, and Fremantle.

Neil also served for several years as Executive Script Consultant in the international divisions of Sony Pictures Television and Columbia Pictures. His animated movie projects include the animated feature Tad: The Lost Explorer (aka Las Adventuras de Tadeo Jones), among the highest grossing movies in the history of Spanish cinema, for which he earned a Spanish Academy “Goya” Award, Gaudi Award, and Cinema Writers’ Circle Award for Best Adapted Screenplay (2013). Tad2 (Tadeo Jones and the Secret of King Midas) won another Goya Award for best animated movie and was also the highest grossing film in Spain for 2017, warranting a green light of Tad3 -- which is now on fast track development with Paramount. Neil co-wrote and served as Co-Executive Producer on the animated film Capture the Flag for Paramount; and the animated movie, Sheep & Wolves, for Wizart Animation (The Snow Queen), 2017 release. He's now working on a new animated movie for Warner Bros., and a new half-hour dramedy pilot.  He’s the author of the bestselling books: 101 Things I Learned in Film School (Grand Central Publishing, 2010; reissue in 2019 by Penguin Random House); The Screenwriter’s Roadmap (Focal Press, 2012, now in ten languages); and The TV Showrunner’s Roadmap (Focal Press, 2014, now in ten languages). Neil gives lectures and hosts workshops around the world on the art and craft of screenwriting, including La Femis in Paris, Met Film School in London, University of the Andes in Santiago, Alexander Mitta Film School in Moscow, Hebrew University in Jerusalem, the Marseilles WebFest, Shanghai Film Arts Academy, and Accademia Nazionale del Cinema in Italy.

His 5th book, TV Writing on Demand: Creating Great Content in the Digital Era, was published by Focal Press/Routledge/Taylor & Francis in February, 2018.  Neil is also on the leadership team of the UCLA/UCA (Universite de Cote d'Azur) Storytelling Institute, a six-week in-residence screenwriting workshop sponsored by Vivendi/CanalPlus, the mayor of Cannes, and the Cannes International Film Festival. Neil also facilitates an advanced Writing for Television workshop at UCLA TFT in partnership with Sony Crackle Television. Both initiatives include a “first look” opportunity with studios.

Neil earned his BA in Motion Picture & Television at UCLA TFT, and his MFA at University of Georgia's Grady School of Journalism & Mass Communication, home of the illustrious George Foster Peabody Awards. Dozens of Neil’s former students have launched highly successful careers in TV and film and wrote their projects under Neil’s tutelage, including most recently Pose by Steven Canals for FX, and Absentia by Gaia Violo for Sony and Amazon.