One Mistake Changes Everything

Marshburn was a consultant on the film to offer views on his lived experiences of daily life during a space mission. He’s a veteran of three space flights and knows his stuff. For instance, “About four times a year a huge cargo comes up to the station and brings us scientific equipment, food and some fresh fruit,” he added. Sadly, the crew can’t order a late night snack and have it delivered. Such information was essential for writers Jason Headley and Angus MacLane to accurately construct the nuanced world of the story. “I spoke for several hours about life in space, what the training is like, what it’s like to do a space walk, and what space looks like from Earth and vice versa,” Marshburn continued. 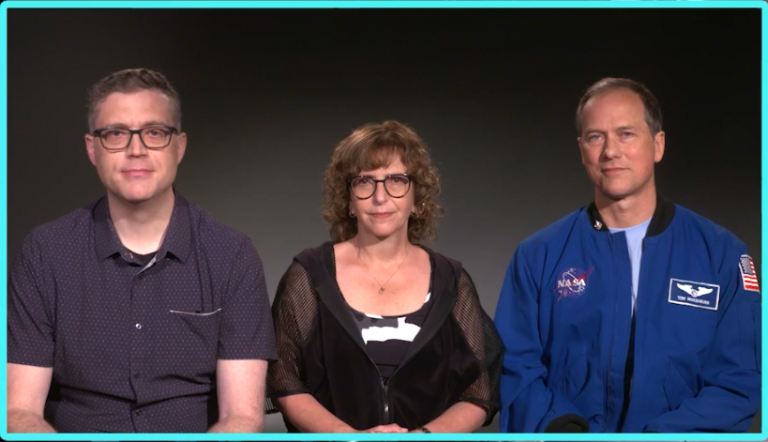 He also invited the cast and crew of Lightyear to visit the Space X Training Center to observe how the astronauts admission control teams prepared for a mission. “I pulled the curtain back to reveal how a space station operates.” The NASA astronaut was mindful of keeping all his information technically accurate without overwhelming the filmmakers with scientific jargon. Marshburn also explained the physical phenomena relativity and time dilation with the mantra of “you can’t fully understand something unless you can explain it in layman’s terms.”

The Power Of Heroes

Buzz Lightyear (Chris Evans) is the hero of the film despite his persistent tug-of-war between aloofness and self-doubt. His goal is to forgive himself and recover from his disastrous mistake that left his crew stranded on an unchartered planet 4.2 million light years from earth. “Both kids and adults need heroes as someone to aspire to,” mused Susman. “We look to heroes to look at different ways to approach the problems in life. Everyone has a different reality and a hero shows one person’s way of approaching that problem, even if it’s incorrect. If you surround yourself with enough aspirational people, you get a collection of ideas about becoming a better person and living a better life.” Furthermore, making mistakes humanizes heroes, they make them accessible, and enable character growth.

MacLane expanded on Susman’s thoughts. “The characters can self reflect and learn by vicariously living through these characters.” Angus MacLane employed the classic heroic myth to write Buzz Lightyear’s character. “Buzz begins as an isolated hero. As the film progresses, he changes from a one-man army into realizing that he doesn’t have all the solutions. It’s a battle between the team vs the individual.” Lightyear carries a heavy psychological burden in the film. He needs to atone for his costly mistake and allow his team space to come up with some of the solutions. These include Alisha Hawthorne (Uzo Aruba), who saw a spark in Buzz when he didn’t, Izzy Hawthorne (Keke Palmer), Mo Morrison (Taika Waititi), and Derby Steel (Dale Soules).

The key element of Lightyear’s character growth is his eventual admission of his weaknesses. Unsurprisingly, the other key characters in the film also make mistakes. The key is how they recover from them.

The filmmakers made a deliberate choice to set Lightyear in the future. “We used the sci-fi glaze to tell parables free from the constraints of modern life,” stated MacLane.

Buzz Lightyear has come of age since the Toy Story movies. He was generally a comic sidekick character in them so he could be a little goofy without really maturing. He was often oblivious to the fact that he wasn’t really a space ranger, but just a toy. Woody (Tom Hanks) constantly reminded him of that fact, without much success.

Lightyear was his chance to become a true leader and inspire his team. “The core essence of Buzz’s character was that he was always at odds with his surroundings, always fighting against a dominant thought,” continued MacLane. “We disconnected Buzz from present time and society to allow for that Rip Van Winkle relationship that is the core of his character.”

Lightyear also needed the audience to care about Buzz. “We put him in a fantastical world with a getable issue of making a mistake and not letting anyone fix it but himself,” expanded Angus. “His steadfast rugged individualism is what will get him into trouble.” The audience connected with Lightyear’s plight by understanding why he wants to fix his mistake while enjoying watching him trying to fix it.

Success at anything requires monumental failures. “It’s how you learn,” said Marshburn. Buzz Lightyear has a lot to learn. “You learn more from your failures than you do from your successes,” pondered Susman. “It’s not a question of whether people are going to fail. It’s a question of what they do with that failure,” added Marshburn. “You need to be okay with yourself, pick up the pieces and move on. It’s the emotional response to failure that counts.”

Susman mentioned the equal importance of villains in Lightyear because they too have lessons to offer. How would you respond in a similar situation? “They’re not just the expression of evil. Villains are characters that made the wrong choice. You can learn as much from the villain as you can from the hero because they make you self reflect.”

Buzz Lightyear is surrounded by a host of characters to ease him into the realization that he doesn’t have all the answers. They include Captain Alisha and Mo Morrison. “Alisha is a mentor character who sees potential in Buzz,” said Angus. “They have each other’s backs because they’re dependent on each other on missions. Their bond is based on trust.”

One of Buzz’s flaws is his relative lack of patience, especially with new recruits. He’s dismissive of them. “After the initial grazes, he realizes that this group, with its new and diverse ways of thinking, can yield wonderful results,” said MacLane. “These are the change characters in the second act which reintroduce him into the society that he’s been separated from.”

“Mo and Derby are exactly the right characters to challenge Buzz because they are so different to him,” continued Galyn. “Mo drifts and won’t commit to anything and Buzz is challenged by that because he’s singularly focused. Derby is basically a criminal on parole who breaks all the rules while Buzz follows the rules to the letter.”

“Izzy is the representation of Buzz’s failure. She’s the specter of his former best friend, and a constant reminder of his inability to solve his problem,” added Angus MacLane.

Evil Emperor Zurg (James Brolin) is the villain in Lightyear. Thomas Marshburn likens a villain to the weakest link in a space mission where everyone is working in close proximity. Anyone that infects the harmonious dynamic of the crew and the mission  may be considered a villain.

Zurg was first introduced in Toy Story 2. “We wanted a rootable, understandable villain. The audience fully understands their viewpoint and they’re at odds with hero,” said MacLane.

“I wanted to write an emotionally satisfying villain that understood Buzz Lightyear’s core philosophy and be at odds with that. Zurg was a reflection of Buzz’s former choices and what might have happened had he not met the characters that allowed him to come back to society and not allowed him to care about people again. Buzz was more concerned about protecting his legacy rather than correcting himself.”

Lightyear gently navigates away from its family action comedy Toy Story roots into sci-fi and thriller terrain. “We focused more on the thriller aspects to tell the story. Sci-fi is more of a window dressing; it’s a setting, a place more than a genre. There aren’t hard and fast rules for sci-fi as there are in thrillers,” said MacLane.

“I wanted the genre in Lightyear to have a broad appeal, but also an edge and a danger seen in thrillers. It had a level of maturity free of comedic elements that would undercut the drama. There would be comedy, but it couldn’t disrupt the believability of the world.”

The trio concurred on a defining scene in Lightyear. “There’s a moment about two-thirds of the way into the film where Buzz is emotionally-drained. He’s contemplating and his visor fogs up as he’s breathing in a cold, dark place. He’s in deep state of vulnerability. He’s at a crossroads. There’s a subtlety and maturity to it that’s not often seen in animated films.“