“Characters Should Be Understandable In Their Vulnerabilities”

Talking animals have been seen in films and TV shows for decades. There was even a show about a talking horse called Mister Ed that ran from 1961 – 1966. Fortunately, Ed was nowhere near as glib, melancholic, or self-destructive as Bojack Horseman, the washed-up former Hollywood star of the canceled TV show Horsing Around. We spoke with the former stand-up comic Raphael Bob-Waksberg about creating an iconic TV show that was as cutting edge in its satirical examination of the unglamorous machinations of Hollywood as it was about the kooky, self-absorbed characters desperately in search of fulfillment and happiness.

Bob-Waksberg confirmed that Bojack Horseman is not his alter ego, but a hybrid of people he’s met in “Hollywood.” It is not so much a catharsis as it is an entertaining adult animation on Netflix. He works on many projects at any given time. He even found time to publish a book of short stories this year. Raphael advises screenwriters to constantly be working on multiple ideas to avoid the dreaded writers’ block. “Doing unrelated tasks such as jig-saw puzzles, reading, going for a walk, or taking a shower [not at the same time] helps me unlock something in my brain,” added the writer. “It helps to let your mind wander for a little bit so it can find its own story solutions you can’t find on your computer screen.”

Raphael Bob-Waksberg explores both ends of the genre spectrum in Bojack Horseman. He declined to label it as either a drama or a comedy. Not due to evasiveness, but through its non-conformity. “I think it’s both. Every episode has scenes that are very funny and scenes that are heartfelt, sincere and tragic.” The writer wouldn’t even commit to calling Bojack a dramedy despite our prompting. “What’s the difference between a drama and a comedy? Is it the ending? Is it how funny it is?” Bojack Horseman is unapologetically both funny and sad at the same time. That was his final answer. 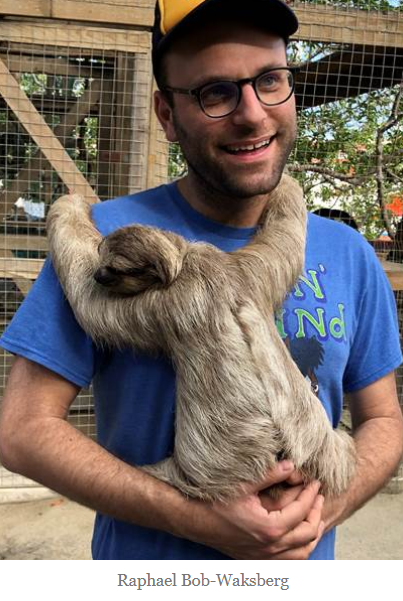 Despite its “refusal to identify” genre, Bojack Horseman retains a pleasantly optimistic tone throughout its six seasons. Raphael believes “the animation does a lot to help Bojack go down easily. You can write a very serious and dramatic scene, but it’s played by a talking horse and a talking cat. That adds a level of levity to it.” Coming from a sketch comedy background, Bob-Waksberg is an inherently funny writer. And he’s not afraid to admit it. He didn’t want to be stuck writing comedy TV scripts before breaking in, so he wrote a TV drama. His manager responded, “I hate to break this to you, but this drama is also a comedy. Oops.” So he set out to sharpen his dramatic storytelling skills to balance his TV writing palette.

Raphael Bob-Waksberg declined to further quibble over the fluidity of genre identity politics. “We focused on what is the story, how to make it dramatically satisfying, which relationships are we focusing on, what character growth are we tracking, and have faith that the comedy will come.”

“From the beginning I wanted Bojack Horseman to be a goofy animated comedy that behaved more like a drama. It’s something we haven’t seen in the half-hour animated space.”

Deep character growth and layered characters are features of Bojack Horseman. The TV writer relies on each character having a wound that prevents them from achieving happiness – often due to their own perceptions and actions. “This comes from spending the last six years and getting to know them in different contexts and how they react to different circumstances.”

Raphael Bob-Waksberg and his writing staff deliberately embed negative personality traits in each character. “We hate it when studios send back notes asking us to make the character more likable.” The TV writer expanded on the definition of likeability. “They don’t have to be likable in terms of someone I want to hang out with, but likable in terms of someone I’d like to watch.”

Many executives typically define likable characters as being admirable, heroic, doing something good, or having a good heart. The TV writer doesn’t necessarily agree with this definition. To Bob-Waksberg, a likable character should be vulnerable. “If I can understand why they’re doing the things they’re doing, what they want, and what they’re doing to get it, that’s what makes a character likable to me. A character should feel understandable in their vulnerabilities.” Not that a character being likable in the traditional sense of being heroic is a bad thing. “The term can be dangerous when it’s misused.”

We circled back on asking Raphael Bob-Waksberg how much of his own personality and life experiences are infused into his writing. “You can’t escape it,” he confessed. This became apparent in his sketch comedy days in college. He was writing plays at the time “which were all about my then-girlfriend.”

“I don’t think you need to work that hard to use characters based on your personality. It will come out. The things you’re interested in, your point of view and the way you see the world will naturally emerge. Every character is a representation of what you view,” he opined. 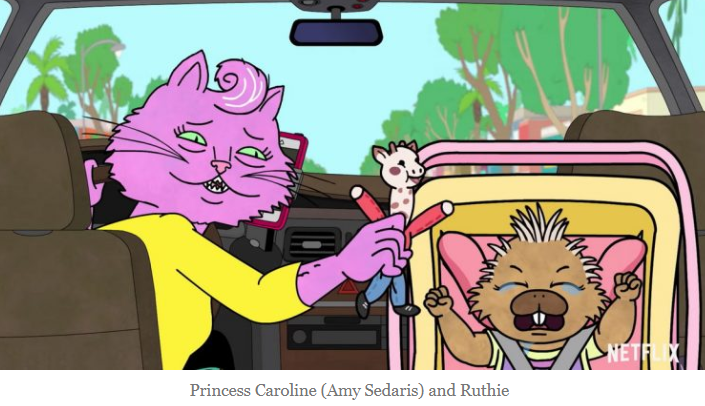 Bojack Horseman is inspiring in that Bob-Waksberg sees light in the brutal world of Hollywood. “The characters may never find true happiness. That’s OK. Finding equanimity and equilibrium is also a great thing to aspire to. Sometimes that’s the closest we get to hope and happiness.” The show is indeed open to interpretation of whether the glass is half full or half empty. “Some people find it unambiguously one or the other. Some see both.”

Raphael has spent the last seven years writing on Bojack Horseman. We asked him how his writing voice has evolved over that time period. “I’ve learned to trust myself a little more. In the first season of Bojack Horseman, I made the show I thought I should be making. Over the course of the seasons, it became the show that I wanted to be making. This made the show stronger.”

The experience has taught Bob-Waksberg to collaborate better and be more amenable to understanding people’s reactions to it. “My first instincts were to immediately dismiss any reaction I didn’t agree with. Now I try to figure out if there’s a way to please that person.” He realized that there are many viewers that attack the show in an effort to improve it rather than to criticize it.

The TV show isn’t as downbeat as it may sometimes seem. So what is Bojack Horseman really about? “I waver between the poles of radical forgiveness and understanding and a righteous quest for justice and retribution. You see this at the core of the show,” proclaimed the showrunner. Bojack has allowed him to express the duplicitous and opposing nature of these philosophies.

“From the beginning, I wanted the writers’ room to be collaborative. When I was hiring staff I wasn’t looking for eight miniature versions of me. I wanted to bring different voices to the show.”

Firstly, they broke out the season as a whole to determine “the tentpoles.” Then they collectively wrote a summary of each episode in one to six sentences. There was a diminishing level of detail in these summaries as the seasons progressed and Bojack Horseman found its stride. Once the season was broken and the outlines were agreed upon, Raphael allowed each writer to “showrun” their own episode. There is something to be said for screenwriter empowerment.

The room later reunited to harmonize the episodes of the season. The writers gave notes and discussed additional ideas for future episodes and seasons. Each episode was outlined and assigned to individual writers. Each writer wrote one draft and got notes from the room. Then they wrote the second draft which was approved by Raphael before he polished it for the final “showrunner’s pass.” These passes were read to the whole room for a punch up before becoming the table draft. They did a table read with the actors and received notes from them to write the final shooting draft.

Working on a TV show for so long brings aspects of discovery and surprise. “I had no idea about Todd’s asexual identity when we were starting. Bojack getting sober is something we had in mind in the first season, but didn’t explore until much later.”

The development process brought many unanticipated changes to character relationships. During the first season, Diane and Mr. Peanutbutter weren’t going to stay together, but ended up getting married. “Let’s explore what their marriage is like. That got us through seasons 2-4 before they got divorced. What a treat to listen to characters and events happening and seeing where they lead us.”

“Let’s not get too stuck on what our plan is for the character. Instead of deciding that this is something that the character would never do, we asked ‘what if they did? What if we exploited it? How would they set it up and what would happen afterward. You can always find an excuse not to do something. What if you found an excuse to do it?” If a joke isn’t used it can be repurposed for something else. Many jokes for Bojack were borrowed from stuff I’d written that went nowhere. “It turns out Bojack was home for it all along.”

Raphael Bob-Waksberg offered his words of advice to screenwriters.”Write the thing that only you can write and put your heart into it. Don’t write the things you think TV executives want to read. Your screenplay should feel fresh, exciting, vivid, and immediate. Find your own impulses and go with them.“